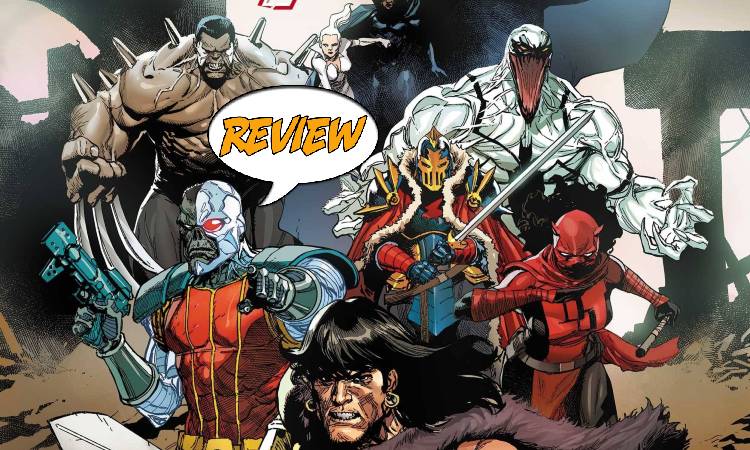 There’s a MadBomb in the city and a snake cult in the sewers, but at least there are a few heroes still active. Your Major Spoilers review of Savage Avengers #1 from Marvel Comics awaits!

Previously in Savage Avengers: Since his exile from the Hyborian Age, Conan the Barbarian has conquered the most dangerous foes the modern Marvel Universe has to offer – but what happens when this hard-edged Cimmerian finds himself on the run from the cybernetic soldier of the future known as Deathlok? Outgunned and outmatched, Conan must turn to an unlikely group of loners, berserkers, and killers if he hopes to survive the night – but can these Savage Avengers defy Deathlok’s murderous manhunt, or will they become the next targets in the crosshairs of tomorrow?

A strange cloaked (like a Romulan Warbird, not like a wizard) figure stalks the rooftops of Manhattan, while Conan The Barbarian tracks down the latest sect of snake worshippers with deadly results. Elsewhere in the city, Agent Antivenom (AKA Flash Thompson, late of Midtown High) follows a lead to a stolen MadBomb, a psychic device designed to turn millions of people into berzerkers overnight, with the help of Daredevil/Elektra Natchios. They follow the stolen tech, clashing with Weapon H on their way, then encountering Cloak and Dagger. When the hidden hunter reveals himself as a Deathlok with orders to kill Conan for his unauthorized time travel, Antivenom, Cloak, Dagger, Daredevil, and Weapon H are joined by The Black Knight and teleport to the Conan/Deathlok battle, which now features a mysterious time vortex that flips the script on our heroes, sucking them all in…

…and depositing them in ancient Hyboria!

The choice of Avengers here is interesting to me, consisting of several antiheroes and characters who have no problem with killing, assembled because their particular proclivity for violence allows them to shake off the MadBomb’s effects. It also means that they might actually survive the mess of swordsmen, wizards, and man-eating monsters that is Conan’s home time period, but the issue does get a little bogged down in making sure everybody gets their introduction and a little bit of back story build-up. When Marvel chose to bring Conan forward into the 21st century, I wasn’t sure it would work, and even though the book ran for nearly 30 issues, I was never entirely convinced that it was anything more than a publicity stunt. The idea of sending people BACK with him feels more workable and Pepose’s script does a serviceable job of assembling our players. I did have to double back more than once during this issue to figure out what just happened, though, and the extended sequence of Cloak trying to tell Dagger he loves her was awkward in the wrong ways. Magno’s art is more successful, showing some remarkably creative layouts (like a 360-degree circle of attacking heroes converging on a Deathlok, but the coloring doesn’t live up to that promise. It’s a weirdly limited color palette, almost like the black/white/red gimmick from the Black, White, and Blood books Marvel has been doing, but with a pale sunset orange subbing in for red.

I would have liked to see some overt explanation of whether this Deathlok’s time-travel shenanigans are related to the OTHER Deathlok in the OTHER Avengers comic, but Savage Avengers #1 mostly pulls it together thanks to the strength of the art, earning a better-than-average 3.5 out of 5 stars overall. There is room for improvement here, but I feel like I want to check back in next time to see how this group of oddballs pulls it together in the days of swords and sorcery. (Also: To see how they explain Elektra’s presumably extended absence.)

Weirdly flat coloring combine with an overstuffed plot to deliver a surprising success!