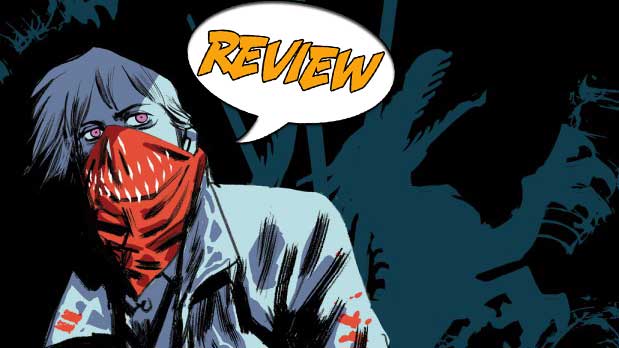 The Scarlet masks may work behind the scenes, but they have their own special skills. Edwin is sent on a special assignment. Is the dead body due to an active monster – or one in the making? Find out in House of Slaughter #6 from BOOM! Studios.

Previously in House of Slaughter: Looking back into the past, we followed the story of Aaron as he grew up in the House of Slaughter, and his romance with Jace from La Maison du Boucher in New Orleans. The House of Slaughter killed Jace’s family when he was younger, and he had carefully plotted his revenge for years. He does let his family’s monsters loose and causes a lot of chaos, but he could not kill Aaron. Years later, Aaron must hunt Jace down and decide whether or not to take his life.

THE CORPSE WITH NO EYES

House of Slaughter #6 opens on the rocky shoreline of an island. As our vantage point draws closer in, we see the body of a young woman wash ashore. A while later she is found by a scouting troop.

The scene shifts to the House of Slaughter. Edwin, a Scarlet mask, plays chess against a young White mask, a boy with no arms. The younger boy beats him and Gerde, a fellow Scarlet mask, makes fun of him. Edwin blames it on the fact that the younger boy doesn’t know how to play properly; he does not follow any of the opening strategies Edwin has memorized. This is part of his issue. He thinks answers can be found in books. He has earned his Scarlet mask, but this is not the mask of a hunter.

Gerde does not think highly of him, and her diatribe tells us more about the Scarlet masks. They are not the monster hunters. Rather, they are the academics of the House. They decide how the House is run. They play politics behind the scenes and deal with things over the long term. Gerde thinks he is jealous of the White masks and hiding that by showing contempt for the young boy who beats him at chess regularly.

Edwin returns to his room where he picks up a paintbrush and copies a heraldic dragon into a sketchbook. A Scarlet mask, Master Colin, tells him he has an assignment. This is connected with the body found on Lake Michigan. The woman, when found, was missing her eyes. This is not entirely unexpected, but there have been several medical incidents involving eyes in the area. The situation is ripe for belief among the boys at camp to unleash a monster.

Edwin is not sure why Colin has chosen him, but Colin tells a parable about three grad students tracking grizzly bears. The bears were engaging in an odd behavior, obfuscating their own footprints. Each student had their own hypothesis as to why, but when Colin asks Edwin for his thoughts about the footprints, he replies that it meant there were bears in the area. He may be pedantic, but he has the knack of seeing the heart of an issue without getting distracted.

Edwin travels to the island where the body was found. He pulls out his sketchbook and brush and almost immediately the brush starts talking to him, berating him for wasting valuable monster blood on a landscape. I love this. The brush for him is the equivalent of stuffed animals for the hunters. A scout with his eye patched approaches and tells Edwin he doesn’t belong there. Edwin shows him the sketchbook and the boy is thrilled. He is also disappointed – he wanted to be an artist, but his vision has changed. Edwin talks to him about seeing with his minds eye and talks with him about his feelings upon losing his eye. We see the momentary flash of seeing a monster, but the little boy does not realize, or perhaps accept, what he saw.

A Scout leader approaches and informs Edwin that this is private land. He looks at the sketchbook, but to him, the pages are blank.

House of Slaughter #6 has a decidedly bleak and melancholy tone. Part of this is set right from the beginning. When we see the island for the first time, the light is flat and gray as though the sky is overcast, and the lake picks up that color. The rocks along the shore are darker gray and the sand is pale. It could be moonlight as well, but it certainly is not the warmth and brightness of full sunlight.

The deeper introduction to the Scarlet masks is interesting. Like other members of the House of Slaughter, they have the interestingly colored eyes we are familiar with, and they wear their masks. They share the attitude about not getting close with others. But instead of seeing them practicing hunting or combat, we see them in the library. There is a stillness about them that makes them seem quiet, but they also have a burning intensity that gives this chapter a completely different tone that is still a dark one.

BOTTOM LINE: ANOTHER SIDE OF SLAUGHTER

House of Slaughter #6 benefits from having some familiarity with the world and the setting. That said, the exploration of a new and fascinating facet of said House of Slaughter makes this issue more accessible to someone new to the book.

The House of Slaughter runs on more than the Dragon and his hunters.