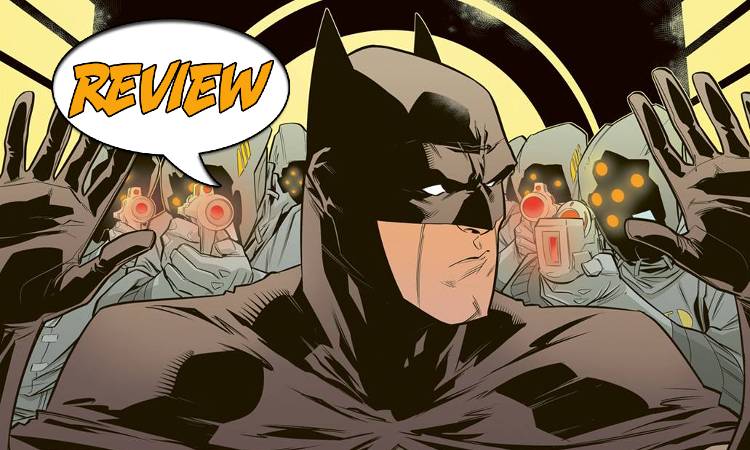 A time anomaly threatens both the 21st and 31st century, and even two super-teams may not be able to turn the tide! Your Major Spoilers review of Justice League vs. The Legion of Super-Heroes #3 from DC Comics awaits!

JUSTICE LEAGUE VS. LEGION OF SUPER-HEROES #3

Previously in Justice League Vs. The Legion of Super-Heroes: The Justice League is trapped in the 31st century with the Legion of Super-Heroes, while the looming terror of the Great Darkness hovers over both time periods simultaneously.  Even as the great heroes of the 21st century get to experience the fantastic far-flung future, the mysteries behind the Gold Lantern and the Great Darkness threaten all of existence. What is the secret behind the Great Darkness? And will the greatest heroes of two ages be able to stop it before it’s too late?

Justice League vs. The Legion of Super-Heroes #3 opens with an address from Computo to the citizens of 31st-century Metropolis, warning them of the plot and thereby making for a clever, streamlined way to deliver the exposition. Brainiac 5 and Batman join forces to try and unravel the problem, only to have the Dark Knight discover by accident that the Gold Lantern he was warned against by Epoch, the former Lord of Time, is in fact a member of the Legion. That’s when the Great Darkness again strikes, separating the LSH and JLA into sub-groups and throwing them through the timestream at random. Mon-El, Naomi, and Brainiac 5 end up in what feels like a prehistoric era, only to be greeted by Kamandi! The founding Legionnaires end up in a strange Gotham City of the future, coming face-to-face with a Batman from beyond! And as for Aquaman and Ultra Boy, they’re just chilling in a meadow having a Bendis conversation…

…until the Tyrannosaurus Rex arrives.

THIS MOVES SO SLOW

This six-issue series still hasn’t done anything to justify its VS. title as, halfway through the issue count, we’ve barely introduced the threat to be neutralized, but that’s the least of the pacing problems here. Batman has been giving a grain of knowledge that may give us the League/Legion fight that the cover implies, but once again, we spend most of the issue in side conversations and, astonishingly, the introduction of EVEN MORE CHARACTERS. Godlewski’s art is fine, not too flashy nor too fussy, but it somehow lacks life. I like how well it maintains the aesthetic of Sook’s Legion designs, though, even if several moments with Aquaman and Black Adam depict them as weirdly teenage and angular. The big double-page spread of the Legionnaires and Leaguers getting drawn into the warp zone in the sky of Metropolis is a big winner, though, and really drives home the sudden terror of the moment. That doesn’t change the fact, though, that we’re halfway through the mini-series and we’ve just reached the point that should have been the climax of the FIRST issue.

BOTTOM LINE: SOMEDAY, WE MAY LEARN ABOUT THE LSH

In short, Justice League vs. The Legion of Super-Heroes #3 suffers from the same shortcomings as BMB’s run on the books that preceded it, those being a focus on multi-page conversations rather than a plot and a general lack of detail about the threat the heroes are facing, with okay art shaping up to 3 out of 5 stars overall. There’s something infuriating about the fact that we’re nearly four years into this iteration of the Legion of Super-Heroes and this issue is STILL predicated on telling us the secret behind Gold Lantern’s puzzle box of an origin.

JUSTICE LEAGUE VS. LEGION OF SUPER-HEROES #3

The first three issues together make a pretty good first issue, but I don't know how they can successfully wrap this up.