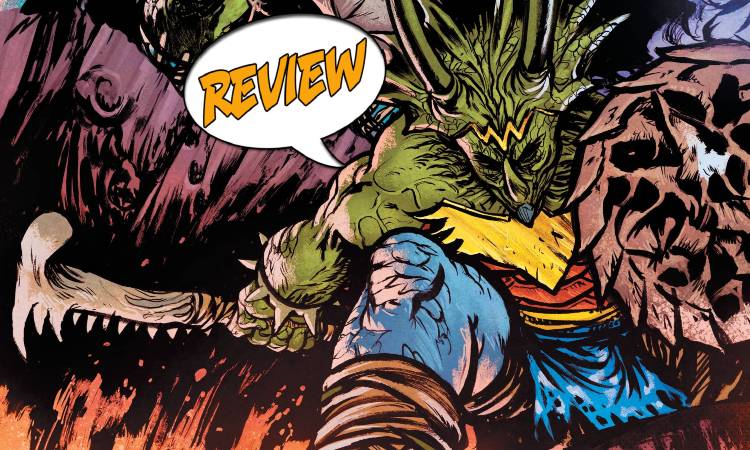 Banded together from remote parts of the world come the world’s greatest super-saurs! Your Major Spoilers review of Jurassic League #1 from DC Comics awaits!

Previously in Jurassic League: You know the story: an infant escapes the destruction of its home planet and is deposited on Earth to be raised by human parents. A goddess from a lost city defends truth. A Tyrannosaurus rex dons the visage of a bat to strike fear into evildoers’ hearts. This heroic trinity, alongside a league of other super-powered dinosaurs, join forces to save a prehistoric Earth from the sinister machinations of Darkseid.

“WE HAPPY FEW, WE BAND OF LIZARDS…”

Jurassic League #1 begins with a rocket, ejected from a dead planet by parents desperate to save the life of their son. The child crashes to Earth and is found by a couple, who decide to raise the baby themselves. Jumping forward in time, we land in Growltham City, where a tyrannosaurus has donned a cape and mask to battle evil as the Bat Walker, clashing with the Jokerzard to protect not only his fellow saurians but the “tiny creatures” who live around the era. When he finally defeats Jokerzard, Bat Walker finds a human child whose parents were lost in the conflict, remembering the loss of his own parents. After first trying to lose his new “sidekick,” he grudgingly takes the child with him. And on the lost island of Trimiscyra, a princess has visions of herself amid a group of costumed protectors…

So, on the one hand, I like the fact that this comic isn’t the dark, overwhelmingly broody story that so much of the modern DC Universe has turned into, but it’s also a lot sillier than I expected. The story is told in broad, humorous strokes throughout, with puns like Growltham City and Metraaaaghpolis serving as the primary vectors of humor. The story itself is quite straightforward throughout, with only the names and some of the over-the-top dialogue separating the story from a more traditional JL title. Juan Gedeon’s art is the real star of this issue, combining realistic landscapes and fabrics with a slightly cartoonier take on our protagonists, with a strange delphinoid Supersaur being my favorite part of the issue. Gedeon’s art reminds me in spots of the midpoint between Sam Kieth’s The Maxx and the ’90s work of Mark Silvestri.

Jurassic League #1 is a bit of a puzzle for me, with a script that plays the adventure straight but dialogue that dials everything up to a comedic eleven combined with clever art that also mixes the comedic and dramatic in unusual ways, making for a still-above-average 3 out of 5 stars overall. The overall effect of the comic is to give me the feeling that the creators want to have their drama cake and eat it comedically too, and while they don’t fail in that endeavor, it’s not quite successful on either level.