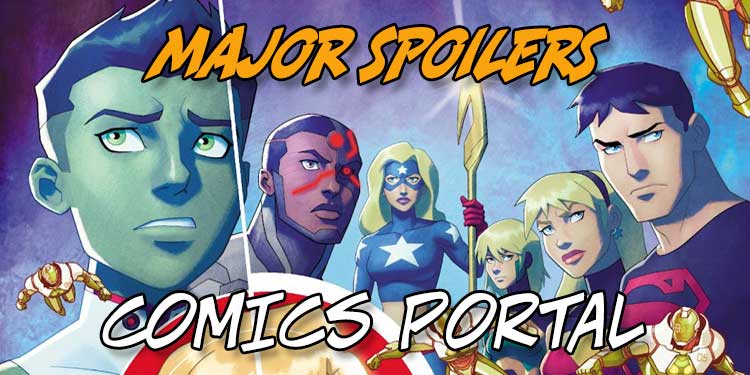 WHAT IS YOUNG JUSTICE?

That line between comics and animated series’ continues to blur with Young Justice!

For those who may not have been watching Young Justice, which right now is in the process of wrapping up its fourth animated season now on HBO Max, here’s a basic description from Wikipedia:

“Young Justice is an American superhero animated television series developed by Brandon Vietti and Greg Weisman for Cartoon Network. Despite its title, it is not a direct adaptation of Peter David, Todd Dezago and Todd Nauck’s Young Justice comic series, but rather an original story set in the DC Universe with a focus on teenage and young adult superheroes.”

The show debuted on November 26, 2010, but it didn’t last long on that cable network. The series was canceled after its second season, called Young Justice: Invasion, along with several other DC-related programs such as Green Lantern: The Animated Series and Beware the Batman.

However, that wasn’t the end of the show. On November 7, 2016, Young Justice: Outsiders was announced as appearing on the short-lived DC Universe, then HBO Max. The original creators were back, and it was followed by the current season, Young Justice: Phantoms. It didn’t take long after the series debuted before DC released an official tie-in comic based on the show. Written by Weisman and Kevin Hopps (one of the show’s writers), a variety of artists provided art for the initial issues.

The comics focused largely on events that took place between the show’s episodes. Starting with the 20th issue, the series was rebranded to match the current season, Young Justice: Invasion. However, the comics only lasted another five issues. They were republished in two omnibus editions that contained additional bonus comics in 2019 and 2021.

The sad thing is that it currently appears that the remaining episodes of season 4 will be the last of the animated series. Creators went on social media saying that “IF” the show came back, not “when.” Recently, DC announced that there will be a six-issue, digital-first mini-series called Young Justice: Targets. The first issue will be coming out on June 14, 2022, on DC Universe Infinite, followed by a physical release in local comics shops on July 26.

Here’s the description of that mini-series from the DC news release:

“Queen Perdita has been kidnapped! Mysterious armored assailants have snatched the Vlatavan royal out from beneath Bowhunter Security, leaving Green Arrow and Black Canary poisoned and comatose in the process! Now a rallying cry echoes around the globe, and across super-teams, to band together and rescue Perdita! Continuing the story of Young Justice: Phantoms, now streaming on HBO MAX, is the six-issue, digital first Young Justice: Targets.”

This comic will be written by Weisman with art by storyboard artist Christopher Jones. Each issue will also contain a bonus story about previously unseen adventures from past seasons. I have been a faithful follower of this incarnation from its very beginnings. If you haven’t seen the shows or read the comics, I highly recommend them all to you.

It’s interesting to me, but one of the descriptions usually associated with Young Justice is “mature.” The series has gone places I never expected an animated show to go, including Beast Boy’s visits to Black Canary as a counselor in the current season. The apparent loss of Superboy this season has also had a powerful impact on the various characters, some more than others, and it’s been quite fascinating to see the grieving process acted out among various characters. However, if you look carefully at the cover of the upcoming debut comic, Conner is there, so he may be back before long!

Is this the end of the animated show? I hope not! It’s been quite a great series full of surprises, such as having Aqualad as the leader in the early episodes while a younger Robin was learning the ropes. Very smartly done!

Of course, if Young Justice continues on only in comics, I’ll be faithfully buying every issue. I imagine they’ll recap the most important things to know when the mini-series debuts, so it’s likely to be a good jumping-on point.

What do you think? Have you been watching the show on HBO Max? Are you interested in the upcoming mini-series? Regardless of your opinion, please be sure to share your thoughts below!