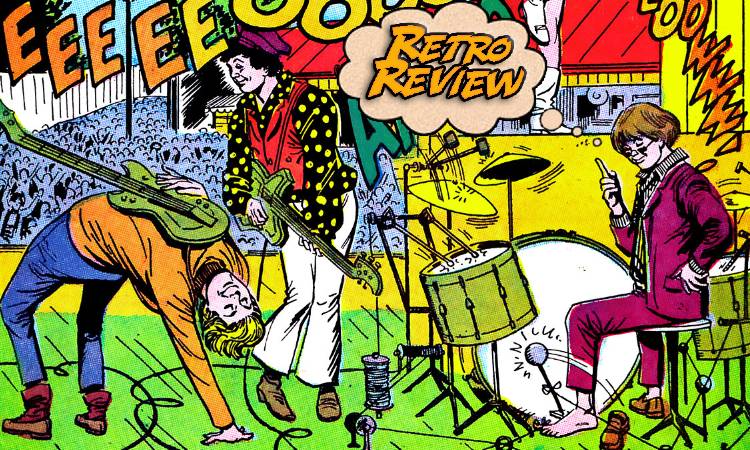 Here they come, walking down the street! They may not be a Fab, PreFab, or even Fantastic Four, but they ARE getting some funny looks from those that they meet. Your Major Spoilers Retro Review of Showcase #68 awaits! Previously in Showcase: The anthology comic book was the bread and butter of the Golden Age of comic books. By 1967, though, American anthologies were on their way out. DC Comics, however, found a truly impressive use for Showcase, the title that accidentally launched the Silver Age when it debuted The Flash back in ’56. Much as modern publishers use a limited series to gauge interest in a character or property, so did DC use short runs in Showcase to launch trial balloons for titles-to-be. Green Lantern (#22), The Atom (#34), and the Metal Men (#37) started out in Showcase, but so did the less-successful Space Ranger (#15), The Creeper (#73), and The Inferior Five (#62). Of course, you’ve likely heard of ALL of them anyway…

You probably haven’t heard of The Maniaks. In the 21st Century, it’s common to see The Monkees dissed (for reasons which your reviewer, a lifelong Monkeemaniac, could but won’t be analyzing here) but when this book came out, they were the new hotness, America’s answer to the British Invasion. It’s no wonder then that Jangle, the group’s lead singer, resembles Micky Dolenz, while the diminutive Pack Rat is clearly visually based on Davy Jones. Flip’s blond hair makes me think he’s a Peter Tork stand-in, while Monkees leader Mike Nesmith is represented by a hot platinum blonde woman. (I honestly think he’d appreciate that.)

Then, after the oddly long four pages of intro, we encounter the group’s erstwhile opposition. I want to make it clear: I am a fan of E. Nelson Bridwell as a writer. I loved Super Friends, I found his Legion of Super-Heroes work charming, and Nelson’s Inferior 5 is perhaps the only parodic super-team that could stand on its own merits, rather than as a curiosity in the annals of the characters being parodied.

Having said that, I hate everything about this page. The puns, the waaaaay-out-of-date pop culture references (even for 1967) and just… just everything. Sekowsky does his best to make it all work on the page, and almost pulls it off until the fourth food pun. The next page introduced half-a-dozen more criminals whose names are the biggest crime of all, leading to a gangland execution (!!) which the Maniaks witness, leading the syndicate to capture our foursome for their own rubout. All of Silver’s dialogue feels lifted from Jack Benny’s radio program, endless references to her cheapness (which doesn’t really feel very period-accurate for an era known as the Summer of Love, when hippies were streaming into California and forsaking material possessions), while Pack Rat’s endless stores of junk remind me of the silent movie escapades of Harpo Marx. It’s all incredibly retrograde, and even their attempt to throw in a trademark chase/romp sequence kinda falls apart in the end. Then, the group gets fitted for concrete galoshes, like a Bowery Boys short from the Great Depression. Before you can’s say Pleasant Valley Sunday or A Hard Day’s Night, the “Eggs Benedict” gang gets dropped in their tracks by Flip’s acrobatics, Pack Rat’s gadgets, and Silver’s makeshift platform shoes (accompanied by the only joke that lands, a parody of These Boots Are Made For Walkin’) and a hurried half-page closer gag that breaks the fourth wall to appeal directly to the readers. Though I had yet to be born in the spring of 1967, I believe that I’m the target audience for this book, loving as I do The Monkees (the obvious template for the group), Sekowsky’s wild and wacky drawing style, and darn near anything having to do with comics, but…  I can’t help but think about how many absolute homeruns came out of the pages of Showcase. I can’t help but think about how even the utterly goofy B’wana Beast (#66) got revived for cartoons. I can’t help but think about Rip Hunter (#20) getting to headline the first season of Legends of Tomorrow. Then, we get to Showcase #68, with the poor Maniaks doing their best to Monkee around in Sekowsky finery with a story that doesn’t really do much or go anywhere, shaking down to 2.5 out of 5 stars overall. It’s by no means a terrible comic, but I feel like the fact that they’ve never been revived* as a disco, grunge, or dubstep act is somewhat telling.

*There have been a few Maniaks references in comics since ’67, but since the comics were written by continuity mavens Kurt Busiek and Grant Morrison, I maintain that those just don’t count.

There's a charm to any Mike Sekowsky art, but Bridwell's humor is pure Marx Brothers, barely cloaked in Age of Aquarius dialogue, with a story that doesn't go anywhere.