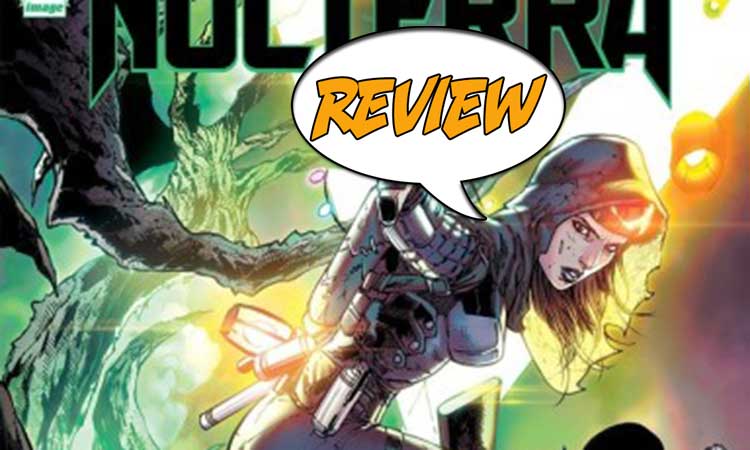 Val needs Bill’s help but does not trust him. He can get them into the base where Nocturnes are made. Can Val get the coordinates to Eos and get back out in one piece? Find out in Nocterra #10 from Image Comics!

Previously in Nocterra: Val and Sundog Convoy are trying to find Eos. Their leads dwindle until the only remaining one is Blacktop Bill. When they find him, he wants to join them. He has his own reasons for turning against the Nocturnes.  He tells them details about Luna, the military compound where the Nocturnes come from, and he talks about his rival there, another Bill, one that he insists on calling William. Bill has not seen Eos, but he has heard about it, and it is supposed to be at Luna. They make their way to Florida, and Bill helps them win a fight against some Nocturnes. But he also has a chat with Bailey (call name Piper).

INTO THE LION’S DEN

Nocterra #10 opens on Piper clearly dreaming. Her dream is full of bright light, bright as the sun. She dreams that their journey is over and that Eos is real. But the joy lasts only a moment before it twists into horror, the horror that the listened to Bill and did what he wanted, and everything turned out worse.

Adam wakes her up for real. It takes her a moment to get her bearings, but they have arrived at Luna, and it is very bright. The base is constructed out on the water, accessible by a long, narrow bridge. They need to get in, find the location of Eos, and get back out. Bill offers to talk his way in, if only they would uncuff him and give him a weapon. Emory suggests sending Bill across as a distraction – and bait – while they use mag clamps to sneak across the underside of the bridge.

That’s the plan, and Val orders Piper and Adam to stay behind with the rigs. More than that, if they get the location for Eos, Val wants then to leave immediately. Piper’s knowledge of her grandfather’s work puts her at risk, but she may be the only person who can save the world.

The bridge not only crosses a bunch of water; it’s water teeming with Megas who start getting restless and making noise. This alerts the guards on the bridge. Whatever they were expecting, it was not Bill, and it certainly wasn’t Val and the rest of her convoy. They get inside and Bill leads them further in, into the dead-end lab where the Nocturnes were made. He offers them the opportunity to become a Nocturne. But there is another door across the lab.

Behind that door are Sam Sugar, the man in charge here, and Diggs, his assistant and someone whom Blacktop Bill injured in a previous fight. Bill introduces Sundog Convoy. They get the coordinates and radio them to Piper. Before they can head out, they see the Nocturnes’ convoy.

As Val and her crew start to make their way back out, with Sam and Diggs in their control. William and his band of Nocturnes arrives. Everyone there is mad at Bill and are looking forward to another chance to fight him. Val desperately radios to Piper that she must head out now! Instead, she shows up with a gun and Adam – and the Hepa Tongue. Plugging in the helmet is not just a way to talk to the Shades. It is a way to drain all the power at Luna.

BETWEEN DARKNESS AND LIGHT

Nocterra #10 is such a grim story. It is interesting starting out with Piper’s optimistic dream. It is so optimistic that we cannot help but immediately recognize it as such. The world is far too grim for this journey to end so easily. She sees her friends as silhouettes against the light, and from there it is a small step to instead seeing Nocturnes. I like the way this dream sequence foreshadows the rest of the events of the book without entirely giving them away.

The whole sequence of sneaking into Luna goes by at a good clip. It is a huge base, and we get to see a variety of rooms. The art carries us through without slowing down the read, which I appreciate. There is something to be said for moving things along until we get to the more interesting encounters. The encounter with Sam and Diggs is indeed that. Sam is a big, powerful looking man, and he is not a Nocturne. We do not really know his motives yet. Diggs has a handprint scar covering his face, a scar from Bill. They may give in readily enough to Sundog Convoy, but they are quick to reverse things when William and his Nocturnes arrive.

BOTTOM LINE: NEARING THE END OF THE LINE

Nocterra #10 sets up a desperate battle with no obvious, easy out. The stakes are high, and everyone has something they are willing to fight for. In a world of such extremes, every action has consequences. It is a little confusing in that we really do not know or understand everyone’s motives, but it does set up a lot of tension.

Val is one step closer to getting Piper to Eos – until Piper takes things into her own hands.