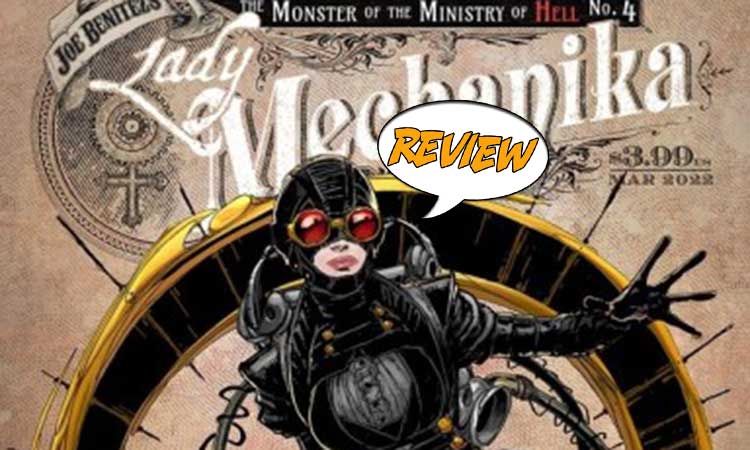 Lady Mechanika’s harrowing story of her childhood concludes with the death of Deacon Grindlethorn. She is sure he is dead, but Dr. Littleton swears he is still alive. Do the Deacon’s terrible experiments continue? Find out in Lady Mechanika #4 from Image Comics!

Previously in Lady Mechanika: A visit to the fair and its Freak Show brings back memories to Lady Mechanika. When she was a girl living at the Ministry of Health, young girls with deformities would be put on display for the amusement of the rich. Mechanika, known then as Evie, seems to be settling in, but the Deacon wants to increase her treatments and try to get her to speak. Kat dreams of escaping to America with Evie. Leelee and Augusta warn Evie to be careful of Kat because she is not right in her head. A few days later, Leelee is gone.

BORN OF TERROR AND TRAUMA

Lady Mechanika #4 opens in the Ministry of Health. Evie has stumbled upon a closet full of specimen jars full of heads, some of which look disquietingly familiar. The Deacon comes upon her. Terrified, Evie runs, knocking over some of the jars. Another masked person is working on a decapitated body. It is a Victorian nightmare come to life. Evie strikes out, killing the Deacon and wounding his assistant. She is eventually subdued and bound for transport to a more secure location.

A couple of masked attendants load her into a mechanized vehicle and drive her to a new location that looks like a fortress. As they chug up the winding drive, there is an explosion. Another masked figure opens the door to the transport. It is Kat, reassuring Evie that she would never let anyone separate them and maligning the guards for being so stupid and gullible.

The scene returns to the present. Mechanika has never spoken of this to anyone before, but she has just shared the tale with Dr. Littleton. That was the first time she ever killed a person, and it still bothers her. But it has helped her to realize that people have both the potential to be monstrous and the potential to be good. It may all depend on the circumstances. The doctor thanks her for her confidence but has something else to tell her. Dr. Grindlethorn, to the best of his knowledge, is not dead. He was not sure about the name alone, but Grindlethorn’s mask is quite distinctive. He recently gave a lecture on skin grafting and continues his research. Mechanika swears this is not possible. But she was a child at the time, a child who had been through extreme trauma. Could her memories be imperfect?

Lady Mechanika finds out where Grindlethorn’s research facility is and sneaks in. She fights her way past the guards and makes her way to a lab. In almost a flashback to her youth, the shelves are full of specimen jars and a masked figure is at work. Mechanika calls him a monster and pins him to the wall, furiously demanding to know how he is still alive. He recognizes her as Evie and pulls off the mask to reveal that it is actually Augusta, whom Evie knew in childhood. She adopted Grindlethorn’s name to honor him, the man who helped her to become a doctor.

Mechanika remembers his treatments as torture. Augusta claims that, while they were painful, they could also be helpful. She does concede that his beside manner was not the best. Mechanika asks about the specimens, the girls he killed. The specimens were taken from the dead, but the bombshell is that Grindlethorn did not kill any of the girls. Nora steps out to tell her that it was Kat. Kat had set Nora up to take the fall for Clara’s death; Grindlethorn was the only one who believe her. Leelee had been killed with rat poison; Evie had stumbled into the old lab when they were performing her autopsy.

Mechanika leaves with an even heavier burden. She did kill a man all those years ago, a man who was not as evil as she had believed.

The art of Lady Mechanika #4 continues to be stunning. Mechanika’s memory of Grindlethorn’s lab and her fight with him is energetic and we can easily imagine it being horrifying for a young child. The use of chaotic, angled panels contributes to this, but they are carefully positioned so that while the action reflects Evie’s panic, we also understand each step along the way. Grindlethorn’s death happens in just a few seconds and changes Mechanika’s life forever.

The story is a terrific setup for Mechanika’s final encounter with the new Dr. Grindlethorn. A breathtaking full-page panel reveals his facility in Victorian skyscraper in the city. Mechanika flies in with a jetpack and wearing a stylish black pinstripe ensemble with a lacy blouse. I love the designs in this so much. The scene is set up to take us straight back to her childhood and her anger flares up right until the moment she hears Augusta’s voice.

Lady Mechanika #4 reveals yet another facet of Mechanika’s complicated and mysterious past. The story is tightly put together and draws heavily on pieces of Victorian history that give this world such rich flavor.

Lady Mechanika concludes the story of her childhood – and learns it may not be finished yet!