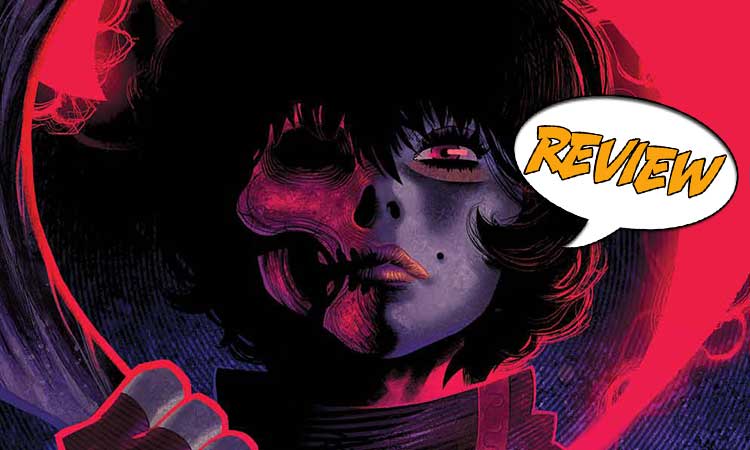 Jessica Harrow is a Reaper, escorting souls to the afterlife. Her latest charge steals her scythe and runs. Can she catch him before she gets into trouble with her supervisor? Find out in Grim #1 from BOOM! Studios.

Previously in Grim: After her death, Jessica was recruited as a Reaper. Now her job is to ferry souls to their final destinations. But unlike the other Reapers, she has no memory of her death and why she is here. Is that about to change?

DON’T FEAR THE REAPER…OR MAYBE DO

Grim #1 opens at night. The song, “Don’t Fear the Reaper,” plays on the radio of a car with a broken windshield. In front of the car, a man lies on the ground. He gets up and looks at his car, crumpled from where it hit a tree. How lucky, he thinks, that he is still alive.

And that’s when Jessica Harrow shows up. She’s a Reaper; Bryan is dead; all that remains is a soul; she is here for him. He does not believe her even when he finds his body lying in the road. She just needs him to follow her, but he does not want to go. She is patient with him, at least up to a point, and does manage to get him down to the river and into a boat.

He starts telling her about what happened, how he had not intended to go to that bar, but he wanted to see his ex and to apologize to her. Then he starts paying attention to the river that they are on and how the water appears to be full of souls. He starts to panic when a ghostly arm reaches up. Jessica whacks it with her scythe. He tries to make conversation some more, and we learn that Jessica does not remember her own death.

Finally, they arrive. If this is the afterlife, this is not what Bryan was expecting. They have reached what is, for all intents and purposes, a large, circular auditorium. Jessica tells him to sit. His name and number are on the board. Soon, someone will be here for him. She has done her job.

She leaves and, on her way out, she checks her pocket for her scythe (which can become that helpfully small). It is missing. She runs into two Reaper friends of hers, Eddie and Marcel, and tells them her scythe is gone. She is convinced that Bryan took it. She must get it back, but she needs their help to get back across the river.

The scene changes to New York City in the winter. A woman and her boyfriend are settling in for the evening when she thinks she sees something. She looks out the window. She sees nothing, but we see Bryan. The woman is his ex, Abigail. Then Jessica arrives with her friends and tells him he cannot interact with the living, and they cannot see him. He takes off running, with her scythe. They chase him down and Jessica tackles him, berating him until a policeman arrives and pulls her off him – a living policeman who can see her!

DEATH AND THE AFTERLIFE

The art of Grim #1 is fantastic. We start to see this right at the opening. For being the scene of a car crash, everything is muted in color. As this is night, everything has a bluish tone. The only brightness is the glow of the car’s headlights against what looks like snow. Bryan looks like himself; he doesn’t look like an obvious spirit. This way, we aren’t completely certain he is dead until Jessica arrives.

Jessica’s arrival is foreshadowed by some pinkish-purple changes to the overall color, and the red manifests in the form of the blade of her scythe. I like the design of the Reapers. Their outfits are red and black, which is a striking color combination, but they are also dressed according to their past lives and times. All of them have a standard-issue scythe, a device that bears a passing resemblance to the traditional harvesting device, but is more futuristic in style with a blade that glows red. I like the way it connects the Reapers and allows for a play in color contrast.

BOTTOM LINE: NOT ANOTHER ORDINARY DAY

I kind of love the concept of Reapers as employees in the business of the afterlife as we see in Grim #1. Adding the classic story of the soul who does not want to leave, as well as the mystery of Jessica’s own death, makes this story even more intriguing.

The latest soul Jessica escorts to the afterlife tries to steal her scythe.