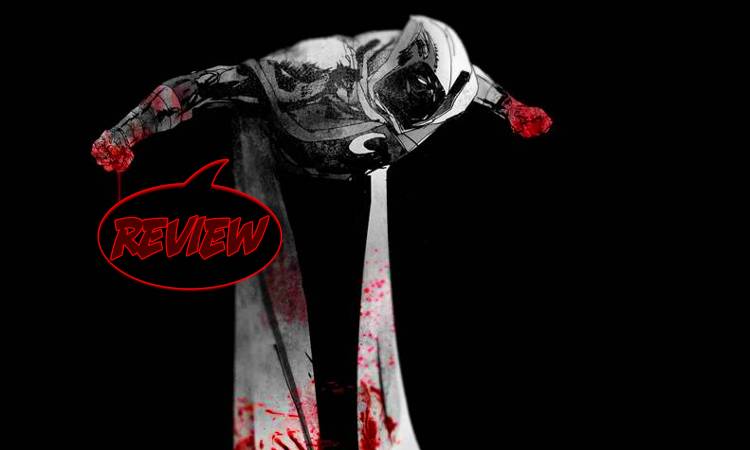 He’s Marvel’s newest TV star, but that’s not all there is to the Fist of Khonshu. Your Major Spoilers review of Moon Knight: Black, White, and Blood #1 from Marvel Comics awaits!

Previously in Moon Knight: Black, White, and Blood: The Fist of Khonshu takes center stage in black and white, but even a Moon Knight can’t avoid the blood-red moon. Stories from across the history of Moon Knight, told by some of comics’ finest creators, featuring a friendly neighborhood guest star!

From the very first page, this book stands out as different from what I expected from a Moon Knight story. We begin in an undated future, as the Fist of Khonshu and his charge have a strangely Lone Wolf & Cub-style adventure through space. Anubis plays a large part in this tale, as well as the second, wherein Spider-Man and Moon Knight try to recover a mystical scarab that belongs to the death-god. There’s also the matter of something Spidey wants to borrow, a bit that threads through the whole story until the reveal that he wants to know if he can use Mister Knight’s pure white three-piece suit for a charity gala. It’s a good joke, brought home by the appearance of Deadpool, once again wearing his Ferris Bueller bathrobe from the end credits sequence of Deadpool. The issue wraps up with a story told in reverse, an interesting experiment that only makes sense in retrospect.

The biggest knock that I have on this issue is the fact that the transition from a stark Moebius future to present-day Spider-Man wisecracks is a bit of a neck-breaker, followed by another serious story taking place in the recent past. The transition points are blurred even more by the use of Anubis in both the first and second story, and the plot-related use of the Mr. Knight suit in the second and third. It’s a fine collection, as long as you’re willing to accept that you’re getting three different things on your combo plate. Bachalo’s dark-and-moody art makes for a lovely opening salvo, followed up by an almost-watercolor story by Akande. This middle tale uses the coloring gimmick the best, in my opinion, with the current black-and-white Moon Knight uniform balanced by a black-and-red Spidey whose uniform reminds me of Tom Holland’s movie costume. Fornes art in the third story is absolutely excellent but features a slightly orangey-red tone that differs from the reds in the first two-thirds of the book, which has an unexpected negative effect on the narrative for me.

All in all, though, Moon Knight: Black, White, and Blood #1 is a strong leadoff issue, giving us three very different takes on Marc Spector’s alter ego(s), well-produced and well-written, averaging a better-than-average 3 out of 5 stars overall. I appreciate the overt attempt to stretch the premise of the character, reminding us that the best characters work in multiple settings and tones, and overall, any weaknesses of the individual stories (like the use of the shopworn Kierkegaard quote to finish The End) is rounded out by the strengths of the other presentations.

They say that the best characters are creatively elastic, and this issue shows some of the flexibility in the core of Moon Knight, with an interesting gimmick to hold it all together.