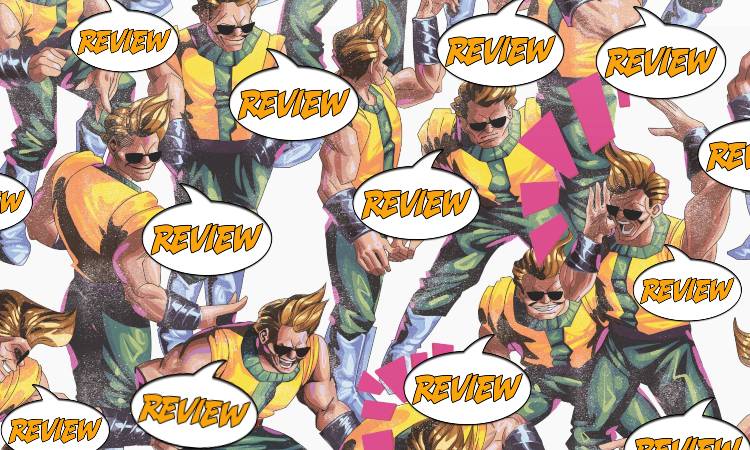 Hardware ended last issue as the target of a missile attack. Will this issue be just 20 pages of smoke and ashes? Your Major Spoilers review of Hardware: Season One #5 from DC Comics awaits!

Previously in Hardware: Season One: Curtis Metcalf returns to Dakota with a bounty on his head and a killer named Reprise is looking to collect!

FROM OUT OF THE RUBBLE

We open with a flashback, as a young Curtis Metcalfe remembers when his father walked out on their family, remembering how abandoned he felt. Cut to the present, where Hardware is barely holding up tons of rubble, protecting his friend Asher from sudden death. With a little instruction, Asher is able to kludge together an escape route, with Hardware’s technology saving them both. In return, he gives Hardware a private plane, allowing him to go after Alva personally. As for Barraki Young, she is in Alva’s clutches already, but both she and the old man are surprised when a plane arrives, seemingly bearing Curtis Metcalfe right back into the line of fire. When his security people fail to stop the armored hero, Alva does the unthinkable: Shutting down Curtis’s A.I., P.O.P., remotely and leaving Hardware to crash to the ground.

The villain shown on the cover, Reprise, only appears at the very end of the issue, and he is the focus of my biggest complaint about this comic book: Two and a half of the issue’s 20 pages are devoted to stat panels of his face. Sure, it’s a clever way to show off his self-replicating powers, but in an issue that already feels crowded, it also feels like a misfire. This issue’s story picks up oddly from issue #4, then lurches forward from there, never quite feeling like its own beast as much as a segment of a bigger story. Cowan and Sienkiewicz are a truly spectacular art team, but even their kinetic visuals can’t get me past the feeling that this book wasn’t designed to be an individual issue. There are some strong moments in here, including our hero succumbing to shock for a few minutes during the flight from Singapore, and I like the idea that he has programmed his A.I. to simulate his absentee dad, but overall, it’s not as satisfying as it should have (could have?) been.

Even with my complaints about the pacing and break points of the story, Hardware: Season One #5 is an exciting read with two really great artists working in concert, and while it’s fun to see this new take (and to see Denys returning to one of my favorite of his creations) it doesn’t feel like a discrete chapter, leading to a still-above-average 3 out of 5 stars overall. There’s one issue left to wrap this one up, and I hope that it pulls everything together successfully. After such a long wait, it would be a real shame for Milestone Comics to make a comeback, only to disappear for another couple of decades.

This issue feels less like an individual comic book than a few pages of a larger graphic novel, but the art is very strong and the story isn't bad.