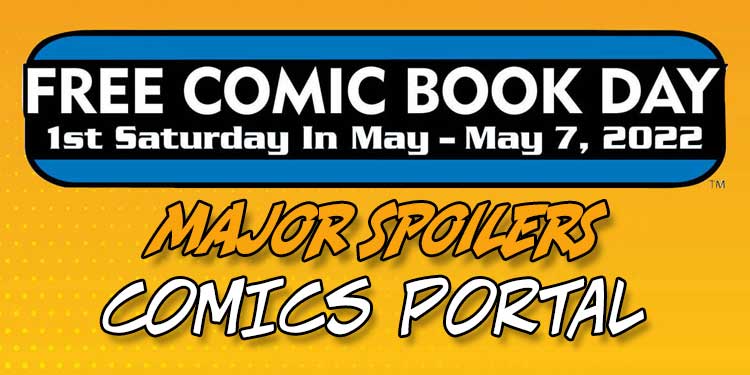 COMICS PORTAL: Been A While, Free Comic Book Day!

Saturday, May 7, was the first “real” Free Comic Book Day we’ve seen in a few years! I think it went very well!

WHAT IS FREE COMIC BOOK DAY? Since we haven’t actually had a Free Comic Book Day (FCBD) that took place the way it previously had happened in a couple of years, we probably need to make sure everyone’s on the same page!

If you go to freecomicbookday.com, you’ll find out a lot about this yearly event in the comics industry. FCBD is described as “a single day when participating comic book specialty shops across North America and around the world give away comic books absolutely free to anyone who comes into their shops.”

“Every year, on the first Saturday in May, the industry comes together to give away free comics and encourage both curious, first-time comic book readers and seasoned comic book fans to flock to the best place in the comic book community: local comic shops. Each one is unique in its community, with a style and personality all its own, and each one carries a full line of comics, graphic novels, toys, and related products. Local comic shops are the hubs of our community, where fans can come together to discover new comics, make lifelong friends, and find a sense of commonality.”

A big part of this event can be costume contests, creator signings, drawings by guest artists, raffles, prizes, and other fun community events. It is often the busiest day of the year in many local shops. Since last year (2021) had a number of FCBD’s spread across several months, this year it seems that many comics shops pulled out all the stops!

Many of the shops I checked in with offered numerous FCBD books to fans who participated. And there were several comics from the “big three” (Marvel, DC, and Image) as well as from other publishers including AWA, Black Mask, BOOM BOX!, Humanoids, Penguin Graphics, Scholastic, Scout Comics, and Vault Comics, just to name a few.

Like FCBD’s past, the earlier you got there, the better the selection was for you to choose from! Many shops limited the number of books you could pick up, but there were some that were happy to let you take individual copies of just about everything! If you went to one of those places, you’re likely still making your way through all the comics you picked up!

Of course, every shop hopes that you won’t only pick up the free stuff! As you check out the store around the free comics, you just might see something you want to pay for and take home as well!

From what I hear, the number of people who came by was actually very strong. Granted, many folks are complying with COVID-19 rules, and that may include avoiding public places like local comics shops. But overall, the stores I checked in with were thrilled Free Comic Book Day was back and did well in giving out free comics and selling their wares as well!

If you didn’t get a chance to stop by your local shop, you can always visit there in the next few days and see if there are any of the free comics left! Many stores will be happy to give you copies of books that remain! Some stores donate them to local hospitals including pediatric wards so kids of all ages can still benefit from them.

WHAT WERE MY IMPRESSIONS? There were several books I got to read, and that included DC, Marvel, AWA, BOOM! Box, and Humanoids.

I also got a chance to look at the successful books Scholastic sells since they had an issue that included Captain Underpants, Dog Man, and Cat Kid Comic Club. All-ages books are quite the rage these days, and it was a real opportunity for me to actually figure out what these popular series I see so often in local shops and major stores as well! For instance, I didn’t know that Dog Man focuses on a person who had a head that was dying and received a transplant from a dog who had a body that was passing away but a head that survived an explosion. Good to know!

I seriously liked the DC ones (of course!) and Neverlands by Tom Taylor, a favorite writer of mine. I’ve also been a long-time fan of Black from Black Mask, and it was great to read some new material from that franchise. The premise that in that universe only Blacks have superpowers is a fascinating use of comics to examine today’s society.

As a big fan of Jeff Lemire, I was also happy to read Image’s The Bone Orchard Mythos: Prelude. This is a shared horror universe by Mr. Lemire and Andrea Sorrentino. It’s going to be something I’ll be picking up on a regular basis.

Humanoids’ The Incal Universe also got my attention! Primos from AWA was another good read, so I’ll be after that book as well!

The book that caused some problems on Saturday was Barbaric from Vault Comics. Many shop owners didn’t know that it was an “adult” book (which meant there were sequences that younger readers should avoid), so it was often in with all the other comics. Some parents didn’t appreciate the nudity and language in it!

However, overall I think Free Comic Book Day was back, strutting its stuff well, hopefully adding new readers as well as attracting previous fans back into the fold! We need every one of you!

What do you think? Did you go to one of the local comics shops in your area? If so, what did they do well, and what could they have done better? Do you plan on participating in FCBD 2023? Regardless of your opinion, please be sure to share your thoughts below!