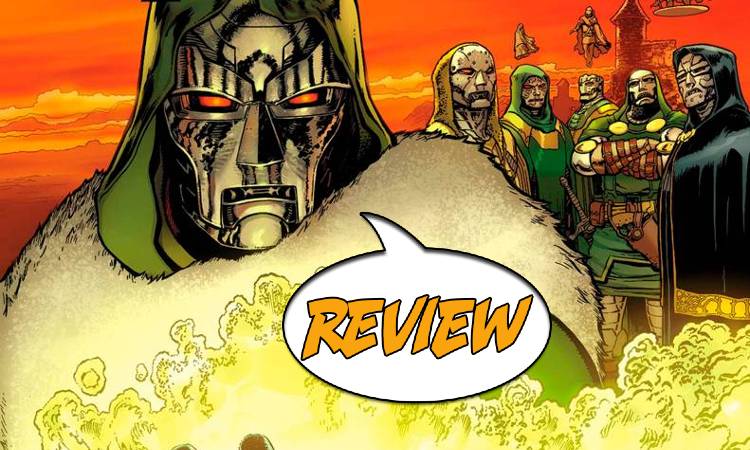 Given all that Doctor Doom has done in his life, what horrors could make the Multiversal Masters’ leader a Doom Above All? Your Major Spoilers review of Avengers Forever #5 from Marvel Comics awaits!

Previously in Avengers Forever: All we know about the leader of the new Multiversal Masters of Evil is that he calls himself Doom Supreme and that universe after universe keeps crumbling before him.

But in a multiverse filled with world-conquering versions of Victor Von Doom, what makes this one The Doom Above All?

WHO HE IS AND HOW HE CAME TO BE

After the matter-of-fact brutality of Ghost Rider’s imprisonment in issue #2, I mentally prepared myself for a journey into the mind of the Doom of Dooms, a man so terrible that he could lead a team of god-level psychos across the multiverse. Avengers Forever #5 begins on Earth-91, in the prehistoric past, with a team of Avengers who are all, somehow, The Man-Thing. Their membership is torn to pieces by the Multiversal Masters, who begin squabbling over the carcass immediately. The only member not to try to claim the planet for his own is Doom, who abstains and lets his “team” fight it out amongst themselves, returning to his sanctuary… but not empty-handed. He has brought his counterpart from that world, the Doom-Thing, and begins to explain to him the story of his power, even removing his mask. Doom-Thing is defiant, at first, breaking free and tearing through the army of Doombots, only to discover that they’re not robots at all. They’re actual Dooms from other worlds, each of whom is now subservient to the Doom Above All. And when DOA (clever, clever Jason Aaron) crucifies him again and tells the story of his power, even the legendary willpower of a Doom cannot long survive.

YOU HAD ME AT “PLANET OF THE MAN-THINGS”

From the beginning, I’ve been of two minds about this series, enjoying the immense planning and conceptualizing behind the alternate realities we’re glimpsing, but not enjoying the darker, bloodier sequences as much. Both issues #3 and #4 felt rushed in their execution, but this issue’s script uses the page count more wisely. Unlike the prime-universe Victor Von D, this Doom didn’t stop with making a mystical armor out of his dead lover’s skin but continued on to murder the only OTHER thing he loved: Himself. This is a Doom who has repeatedly murdered his other “selves,” adding each new skin to his armor and his magical armory, enslaving others to his horrific will. Towe doesn’t hold back from showing us these terrible images, but for some reason, it sits better with me than in previous issues, serving to show the madness of a Doom beyond sanity (especially given that the Doom I already know is a few salad tongs short of an Old Country Buffet already). There are some wonderful visual moments in here, but the second half of the issue gets a bit muddy with all the green cloaks and shadow. Still, it ends with the return of Doom, The Living Planet, a character who I immediately found to be hilarious and terrifying all at once.

Focusing on a single character and delving into what makes him tick, Avengers Forever #5 serves as a well-done character study to sell us on a threat bigger than the Doctor Doom we know, carefully skating the edge of going too far but never tumbling over, earning 4 out of 5 stars overall. One of Aaron’s strengths as a writer is taking an existing concept and giving it the “Yes, aaaand…” treatment to create something new out of what occurs to him, and this issue does that while holding it all together.

Aaron's story keeps raising the universal stakes, striking a balance between intensifying the experience while never *quite* going overboard, with strong art to hold it all together. I like what this book is doing.