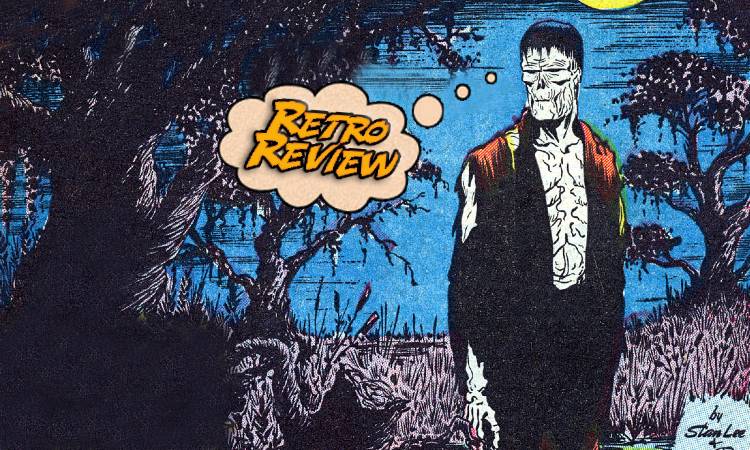 Previously in Menace: The advent of Warren Publishing’s black-and-white magazines in the 1960s had unexpected effects on the comic book industry as a whole, and Marvel Comics specifically. Since magazine-size books were outside the purview of the Comics Code Authority, they weren’t subject to the same restrictions, leading Magazine Management (which was, in a complex way, sort of Marvel Comics’ weird big brother in the corporate structure of the Perfect Film & Chemical Corporation) to start their own line. Marvel’s characters, including The Punisher, Shang-Chi, and their take on Dracula had their own titles, as did a more unlikely protagonist: Simon Garth, The Zombie. But the Zombie of the titular Tales got his start decades earlier, in the pages of Menace. This story’s artist, Bill Everett, had already created Namor the Sub-Mariner during the Golden Age, and was about a decade from co-creating Daredevil when this story was printed. It’s interesting to see his work here, in a state somewhere between the cartoony stylings of Amazing-Man and the intricate work he’d be doing at ’70s Marvel. The cartoony aspects are definitely here in Gyps the gardener, who feels a half-step away from a horrific stereotype in an episode of The Cisco Kid, but then there are visuals like Simon at Mardi Gras. The creativity of these layouts is remarkable, especially in a monthly horror anthology of the era, but this story also has some genuine chills, as the Zombie finds a rich young jack-a-dandy in an alleyway and prepares to kill him and take whatever gold he has. (His clothing is oddly Victorian, as are his sideburns, a moment that feels odd in the context of the later revival, which takes place in the 1970s.) Returning to his cruel master empty-handed after the intervention of a policeman, we get a rather graphic torture sequence that should remind readers of the hottest thing in comics circa ’53: EC’s horror titles. Gyps (who isn’t actually named in this story, only gaining that designation later) sends him out to get something even more important to him than riches: A beautiful young woman. It’s creepy as all heck, not only in terms of horror but on a purely human, visceral level.

And then, we get the twist… The obedient Zombie sees the young woman and flees, lumbering back into the darkness to his master’s lair, knowing that he’ll be tortured upon his return. That is, unless he’s not the only dead man in the room. It’s an ending that perfectly wraps up the premise with a really good twist, The rest of this issue of Menace contains a Joe Maneely-drawn tale whose twist is much sillier, a George Tuska piece with a vicious little ending, and Russ Heath giving us astronauts in an acidic atmosphere. None of these stories quite reach the heights of the lead feature, but all in all, Menace #5 is an issue without any real failures and a lead tale that is a solid home run, rounding out to 3.5 out of 5 stars overall. As someone who loves Tales of the Zombie as much as any issue of Spider-Man or Detective Comics, I will tell you that this one is among the best comic books printed under an Atlas banner.

For a short story in a random horror anthology, it has surprising longevity, and the expert work of Lee and Everett makes for unexpected alchemy. There's a reason it keeps getting revived.