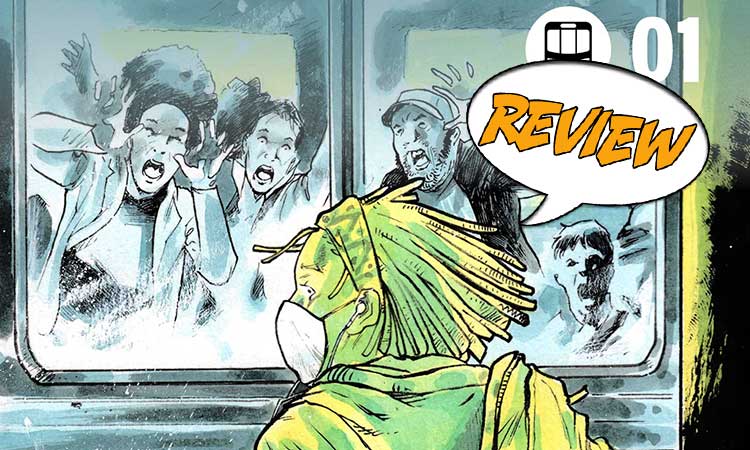 It’s the height of the pandemic, tensions are high, and a group of strangers just found themselves trapped in a subway car, your Major Spoilers review of The Panic #1, awaits!

Previously in The Panic: Moments ago Annie Delgado was commuting into NYC via the PATH train to Christopher Street. Then, her train derailed, forcer her and a group of strangers to come together in hopes of surviving the night.

The Panic #1 opens with a series of pages that seems to jump between three time periods, before the main incidents of the issue, during those moments, and after.  It eventually settles into a consistent time period, with Annie and her friend meeting up to head to a protest via the subway.  While on the train the two try to pass the time by playing games, when Annie sees a horrific image that quickly goes away.  Soon after the train crashes.  As things settle down, the survivors pull themselves out of the wreckage and they begin to help the others.  There appears to be only a handful of survivors on Annie’s car, they introduce themselves to each other, while Annie tries to calm down a young boy. During the introductions, tempers begin to flare.  That’s when they notice that one of the passengers doesn’t look like they were on the train before the crash.

The Panic #1 is a book that is definitely tone first, plot second.  There’s a real sense of tension in this issue as the events unfold and the people come to terms with what’s happened to them.  The way that the various characters react initially feels legitimate and plausible.  After this though, things start to fall apart.  Towards the end of this issue, things take a strange turn that lacks explanation.  Based on some pretty superficial and circumstantial reasonings the characters all gang up and attack someone who is inexplicably unharmed by the train crash, leading them to believe he wasn’t on the train when it happened.  So, they throw him out the door.  It’s just an emotional response that doesn’t have much reasoning within the story.  It leaves these pages feeling jarring and out of place.

The art in The Panic #1 is a watercolor-esque that utilizes a limited color palette of dirty grays and uneasy greens.  The art does a nice job of adding to the unsettling nature of the story and doesn’t allow the viewer to get comfortable with the art.  The colors seem to match the characters in effective ways that add voice to their dialog.  But, like what seems like a majority of comics that use limited colors, this issue has to emphasize bits of red everywhere.  Hats, jackets, and blood all get their chance to stick out.  It’s not a gimmick that’s poorly done here, but there’s no getting around the fact that this has become a cliché art technique and it just doesn’t add much to this story.

THE BOTTOM LINE:  A LOT OF TONE WITH NOWHERE TO GO

The Panic #1 is a comic that seems to be more about pitching the reader on the premise rather than telling a story.  Very quickly the characters are thrown into a dire situation and tension among them is generated, but that emotion is then directed into strange plot decisions and character development.  3 out of 5 stars.

The Panic #1 is a good-looking comic that does a great job building tension and setting a tone. But then hamstrings itself with a bunch of perplexing plot developments and character actions.