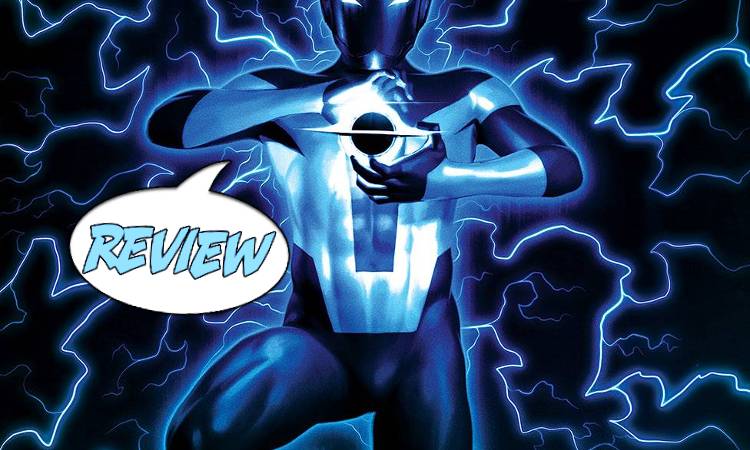 Things are getting mighty complicated down Lockport way. What will it mean for the once and future Radiants Black? Your Major Spoilers review of Radiant Black #14 from Image Comics awaits!

Previously in Radiant Black: Enough is enough. It’s time for Marshall to take the fight to EpicFront and put an end to this parade of super-criminals for good. But they won’t be going down without a fight-and could their new weapon be strong enough to turn the tables on Radiant Black?

Finally out of the hospital after months in a coma, Nathan Bennett is able to get back to his life (and his girlfriend, JJ). Their idyllic getaway to an Airbnb is interrupted by literal bad news, as his phone alerts him to last issue’s battle and its consequences for Lockport. Public opinion of Radiant Black is starting to shift, and Nathan immediately goes to find Marshall. Their conversation turns suddenly hostile when Nathan reveals that the strange “robot” presence has been trying to contact him again, but it’s interrupted by the villain called Sheer. Fortunately, Sheer isn’t smart enough to mask his location, and Marshall/Radiant Black is able to quickly find and shut him down, then tracks him back to EpicFront. He literally smashes through the skylight, opening up with full power on the would-be internet stars, using his powers to shatter the arms of the cameraman who has been documenting their shenanigans and leaving them in a burning building. It’s a truly shocking moment.

So shocking that, when their strange benefactor tries to contact him once more, Nathan answers…

SHAPING UP FOR A DIFFERENT CONFLICT

On the one hand, if this story is building to a Nathan vs. Marshall showdown, I’m impressed with the restraint of the slow-burn storyline. With Shift having escaped, the problems of the tech-villains clearly aren’t done, either, leaving several open-ended story channels to follow. As the Radiant Black universe has expanded, Higgins’ story has also grown in scope but maintained the grounded center of it all in two guys from a suburb of Chicago. Costa and Ferigato together create a slightly more complex art style than we’ve seen in previous issues, but that’s not a bad thing. Sheer’s livestream showing off makes for a couple of really good-looking pages, including POV shots and some creative lighting effects/coloring. There are some moments that required more than one pass for me to fully follow (Marshall throwing Sheer through the skylight before flying through is a bit difficult to parse), but on the whole, the art is well-done.

From the beginning of this series, the “Massiveverse” has been entirely my proverbial jam, and Radiant Black #14 continues that streak, bringing old-school Marvel-style storytelling to the forefront with good-looking art and a few narrative wobbles that don’t bring the entire enterprise down, earning 3.5 out of 5 stars overall. I sort of hope that my suspicions about what happens next are wrong, but either way, I believe that this creative team will still be able to surprise readers.

Marshall may have gone too far, and Nathan seems ready to take back his helmet. That's bad, but it makes for a good story.

PREVIEW: Ultraman: The Mystery of Ultraseven #1