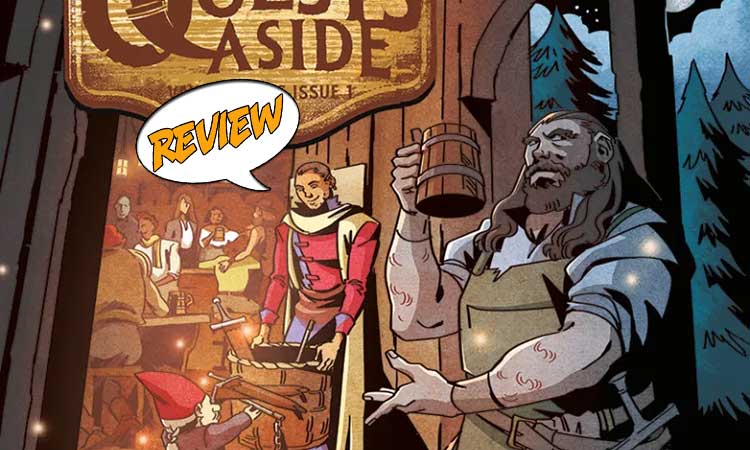 Barrow, legendary adventurer and now barkeep, just wants to run his place in peace. But when the King drops in with an offer, Barrow can’t just refuse, can he? Find out in Quests Aside #1 from Vault Comics!

Previously in Quests Aside: The legendary adventurer, Barrow, has retired and opened a thriving business – a tavern called Quests Aside. It is the perfect watering hole for any thirsty adventurers who happen to be traveling through. Seems like an easy and prosperous way to make a living.

A tavern, adventurers, jokes, and sight gags – Quests Aside #1 has a lot of what you might expect from looking at the cover. But beneath the shenanigans, there is already the thread of a bigger plot and a more serious mystery which makes it worth the time.

We open with three adventurers, eager to pay a visit to Quests Aside. Barrow, the owner, is legendary. Just outside the door, a bard extols all the tavern’s good points. Inside there are humorous Relics of Name-Dropping. Behind the bar, Jodan (a cheerful, young man) and Vail (a dour, strong woman) are ready to serve a drink or offer up a side quest. The group falls for Jodan’s quest, dash out the door, and are stepped on by a giant. At this point, it’s looking like a goofier book.

The scene changes to a young woman (Zuzanna) waking up and realizing she is going to be late for work. She wakes her partner, Ray, who happens to be a skeleton. Back at the tavern, one of the local toughs is collecting fees from Barrow and threatening him with the displeasure of the king. Barrow sends him packing, and in comes Mira, from another tavern, with an offer to buy Quests Aside. Barrow does not want to sell. Ray and Zuzanna come running in for work late. Barrow scolds them, but to him they are family. He won’t do more than admonish them.

Barrow calls Vail into the back room. The King is coming for a visit, and he wants her to take the afternoon off. Barrow knows she will try to assassinate the King. He also made her a deal to keep her safe, and killing the King would make that difficult. The king apparently took a lot from her family. Vail thinks on it for a moment and decides that if she cannot be an assassin, perhaps she can be a spy and bring him down that way. Barrow’s life is not an easy one. To keep her out of trouble, he instead has Ray send her into the omni-dimensional storeroom to look for a MacGuffin.

Outside, the bard looks up from tuning. The king’s herald is here with his 18-string guitar and the two of them have a little instrumental throw-down. The King meets privately with Barrow. They used to be adventurers together and they reminisce for a while, but then the King comes down to business. He wants Barrow’s building so he can convert it into barracks.

The art of Quests Aside #1 is solid and imaginative. As I mentioned, there are sight gags. When the giant squishes the adventurers, her foot coming down made me think of Monty Python. Ray’s appearance is dramatic and then funny. Quests Aside looks like a place that has been there for a long time. The walls are covered with memorabilia. I love the rustic tables with candles set out on them, and the fact that Vail and Jodan go around setting out vases. A patron even has a drink with an umbrella in it. There is so much flavor.

I think my favorite sequence is between the bard and the herald. It is played up for drama. The bard notices the herald when his shadow falls across him. We then see him as the bard does, backlit so he has strong shadows. He pulls out his ridiculous guitar, poses, and starts. Not to be outdone, the bard furiously bows on his rebec and counters with his own verses.

BOTTOM LINE: A FINE MIX OF HUMOR AND DRAMA

Quests Aside #1 has many of the tropes we love, but also enough subversion of them that they seem fresh. The story that is being revealed is serious, even dark, so the humor plays an interesting counterpoint to that.