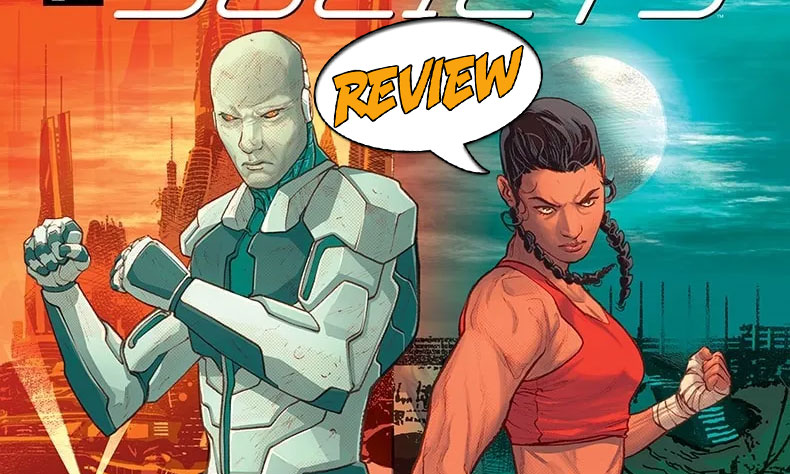 Human versus Robot. Who will reign supreme? Your Major Spoilers review of Metal Society #1 from Top Cow awaits!

Previously in Metal Society: In an inverted future, evolved robots have resurrected humans for manual labor. When a tribalistic cultural clash breaks out, a fearless human fighter and a frustrated, displaced robot will square off in a public MMA-style sport fight of epic stakes to determine once and for all who reigns supreme: man or machine.

Thousands of years ago, the human race lived and died and destroyed their world, leaving behind an empty husk and thousands of artificial intelligences. The robots rebuilt society in their own image, cloning a new race of humans, starting with just six beings. The second generation was more than 100, and by the time Rose GenThree was created, thousands of humans, all serving as disposable workers to do the jobs that robots found too demeaning, dirty, or just plain boring. But Rosa is much more than just a young woman, she’s been genetically engineered with superhuman strength and was raised in squalor in the shadow of Robot City 2420. She’s also a very angry woman. With the help of Abe, one of the first-generation humans, she has trained to fight in a very special exhibition bout against the machine’s champion, WOL-421313. Both fighters are prepared, both have something to prove, but as this issue ends, they’re toe to toe, with Rosa remembering her promise to Abe: Turn her anger to something more, by fighting for humanity.

“YOU FIGHT FOR ALL HUMANITY.”

Guilherme Balbi really knocks the art in this issue out of the proverbial park, creating a world that is both futuristic and relatable, drawing on what seems like a Star Wars influence, combining high technology with the dissipated gray world of the humans. The juxtaposition of the robots’ high-rise city and the filthy tent city of the humans amps up the stakes, and the story gives us a good look at Rosa’s back story (and thus, the world’s). The premise here is a science fiction workhorse (Rod Serling did a take on it back in ’63, starring Lee Marvin) but it’s not so shopworn that it doesn’t still have legs in 2022. I don’t know if we’re going to find out about WOL-421313’s story or not, as this story could go a lot of places from here, but simply finding out about Rosa’s life and times shows off the creators’ world-building in an organic and entertaining way.

I’ll be honest, my initial interest in Metal Society #1 came from the evocative title, but the combination of interesting character development and truly impressive art is what will bring me back for the rest of the series, shaking down to 4.5 out of 5 stars overall. It’s the kind of debut issue that fills you with ideas about where things might go next, reminding me of my response to Atari Force back in ’84, and more recently, to the first issue of Saga. It’s well worth checking out.

This story focuses mostly on the human's champion, Rosa GenThree, setting up the world and her motivations well, with really impressive art rounding things out.