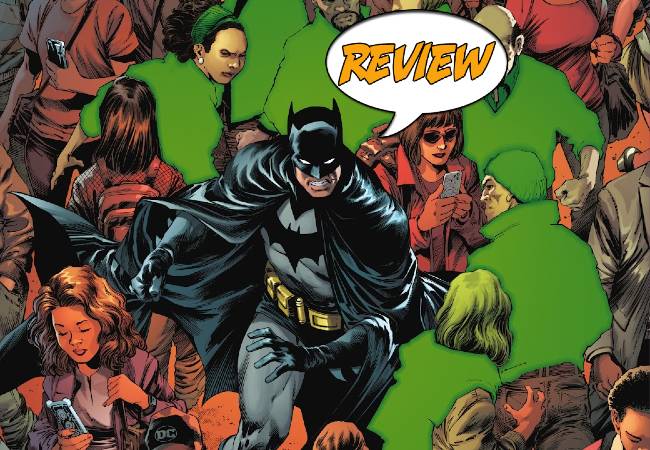 Edward Nygma has a riddle for us all: When is a criminal… NOT a criminal? Your Major Spoilers review of Detective Comics #1059 from DC Comics awaits!

Previously in Detective Comics: Riddle me this…when is a criminal not a criminal? The Riddler is back in Gotham City in a big way, becoming a media personality and using his newfound influence to wreak havoc on the Dark Knight. As Batman chases down clues to put an end to Riddler’s machinations, the clock ticks away for the citizens of Gotham whom Edward Nygma has placed in the line of fire…

THE RIDDLER’S BACK, WITH A TERRIBLE MUSTACHE

The people of Gotham City are used to weird, but when The Riddler begins broadcasting on his own pirate radio frequency, things are getting weird enough to notice. Even Batman is paying attention, but if the man known as E. Nygma is hiding clues, he’s doing a very good job of it, and even the world’s greatest detective can’t suss out the hidden meanings. Then, a bomb is discovered in the Gotham City courthouse, and a high-profile young influencer is seemingly responsible. She doesn’t even argue when the Dark Knight arrives to arrest her. Nor does the next social media criminal, or the next after that. By the time a fourth crime has been committed by a person with no criminal background or history, things are getting seriously weird, and it’s all tied to the Riddler, somehow.

In the backup tale, Claire “Gotham Girl” Clover is out of Arkham Asylum and free to go about her business but finds herself unable to get away from her past. Someone has created a gossip website in her name, and she’s going to find out who… and why.

For my money, the Gotham Girl story is the more interesting of the two, but I found both features enjoyable. Ivan Reis’ Gotham feels different than many recent interpretations (possibly because the city must have been rebuilt after all the recent madness) and his take on Batman errs on the side of “flexibility over heavy armor.” Even better, Bruce Wayne has a meaningful role in the story, doing more than swan about in a tuxedo. In fact, his investigating and personal relationships get him to the victim of the bomb scare to figure out the next step in Batman’s investigation. As weird as it is to see Lapham back on a mainstream Big Two book, his art in the second feature is remarkable, giving Gotham Girl a new costume and a new headquarters in the abandoned Wayne Manor. Her story is only the first chapter, but it’s already got my attention, while the antics of the Riddler also bear additional scrutiny.

BOTTOM LINE: I MIGHT BE READING DETECTIVE COMICS AGAIN

There are a few hiccups in this issue for me, including a lack of context for the current status quo of Gotham and Batman. Bruce is clearly no longer rich, and Arkham has been moved to a shiny tower in the city, but overall Detective Comics #1059 is a good issue and makes a strong argument for returning ‘Tec to my pull list, earning 4 out of 5 stars overall. I’m not the world’s biggest Bat-fan, but this issue makes me want to come back next time, even if I hate Riddler’s new highly waxed mustache.

The art is great on both stories, and the return of the Riddler (and Gotham Girl) open up interesting new possibilities for Batman, and for Bruce Wayne.