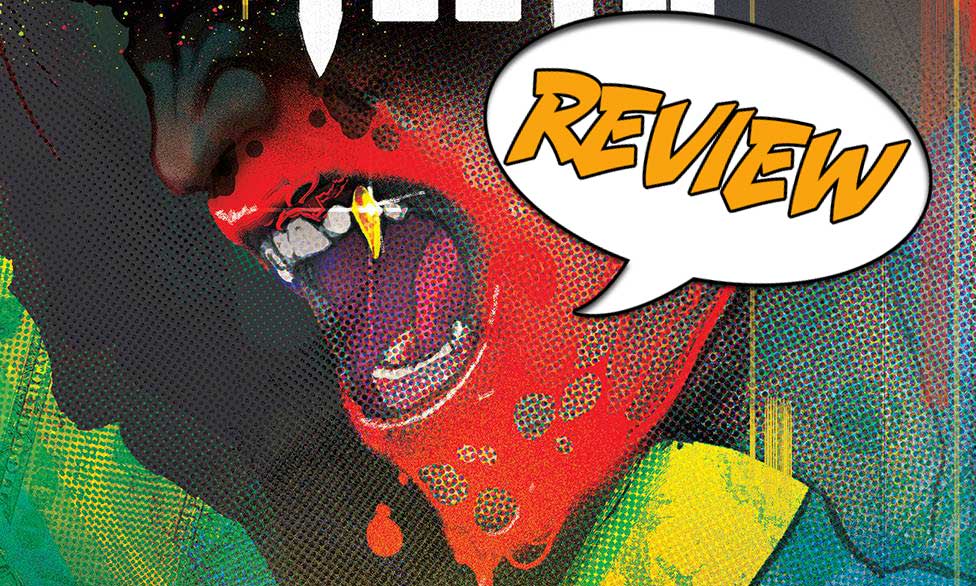 In vampire society, there are the First Born and then there are the Sips. Atticus Sloane has been creating Sips over the years. When he is caught, what consequences will he face? Find out in Blood Stained Teeth #1 from Image Comics!

Previously in Blood Stained Teeth: There are vampires in the world. The First Born are rich and powerful, and they like it that way. They have the ability to turn others into vampires known as Sips, but to do so is frowned upon. Sips are vicious, unsatisfiable killers and the First Born have forbidden them. That doesn’t mean that they aren’t out there though…

MAKING A PROFIT OFF IMMORTALITY

Blood Stained Teeth #1 opens with Atticus Sloane who is a First Born, and a vampire for hire. What he sells is immortality by a vampire bite. What he sells it for is cash upfront and a percentage of future earnings in perpetuity. It’s a living until he turns into an influencer with a couple of million followers (Jennifer) and she starts posting online – an unexpected complication. His familiar (and also a Sip), Joey, reassures him that there is a lot of weird stuff on the internet and probably no one will even notice. Then Jennifer posts about doing a live feeding.

Was this, in fact, a bad idea? Atticus remembers something about flyers forty years ago. The story flashes back fifteen years when a man with multiple stab wounds is brought to the ER. He is dressed in evening dress as well as a cape, looking like a classic Dracula, and he begs for blood, even begging to bite the doctor. This patient is Mr. Kinski. Not only has he lost a lot of blood from his wounds, but it turns out he has cancer which has spread through his body. He doesn’t have any next of kin that they can find either. As Dr. Phelps tries to figure out what to do next, a nurse comes out of his room. Mr. Kinski is gone and all he has left behind is a little flyer for “Mr. Bite.”

Back in the present, Joey picks Atticus up after a First Born party. These events are also an occasion to feast, and on this particular night, the feast is an untethered Sip. Except that he isn’t exactly untethered; he was a blind artist turned by Sloane so he could get his vision back. And a First Born cannot feed on one of his own Sips.

This does not go unnoticed, and Sloane is taken to another room where he meets Brother Stoker, a First Born who created vampire fiction so there would be a story the real vampires could hide behind. With him he brings his heavy, the First Born called Mr. Tooth. Stoker implies that he knows the Sip at the feast was one of Sloane’s, and indicates that he knows Joey is a Sip. Atticus storms out.

Later, at his home, there is a thud at the door. When he opens it, Joey falls in with a hole through his chest where his heart used to be. He is closely followed by Mr. Tooth who wallops Sloane soundly. When he comes to, he is missing a tooth. Stoker demands to know how many Sips he has turned. Sloane claims he cannot remember. They drag him up to a window and open the curtains so the sun starts to burn him. He has created a problem with his Sips and now he must take care of it.

THE DARK SIDE OF THE NIGHT LIFE

Blood Stained Teeth #1 is a picture into the seedy side of vampire life. While the First Born may favor a rich lifestyle, they have survived by keeping a low profile. Their social structure is reminiscent of a crime family. Sloane is the renegade of the family, running his own side hustle in the Sip business. The flavor we get is gritty life on the streets after dark.

The art is so distinctive. The style is realistic to start with, but with strong inking. I think this helps capture that the action happens at night and in dark, interior places. Playing against this is the wild color palette. The backgrounds are heavy in blues and greens, cool colors that frequently symbolize night. Against this, Sloane wears a yellow suit at first. Our eyes are drawn to him when he is on panel. And then there are pops of reds and magentas, sometimes accenting blood or body parts, but mostly to continue the mood and set up sharp contrasts throughout.

BOTTOM LINE: THINGS ARE GREAT UNTIL YOU GET CAUGHT

Blood Stained Teeth #1 does not romanticize vampires but instead starts out with a story of power and privilege – and the lengths that some individuals will go to keep that power just where they like it.

Vampires are powerful, not nice, and protect their lifestyle ruthlessly.