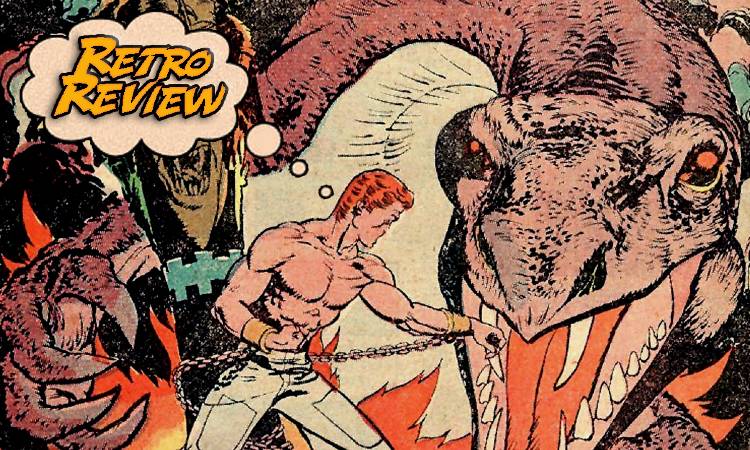 There has been a lot of great horror comic books over the last 8 decades, but which one was the first? Tales from the Crypt? Adventures Into the Unknown? Captain America’s Weird Tales? Get ready to guess again… Your Major Spoilers Retro Review of Eerie Comics #1 awaits!

Previously in Eerie Comics: Best-known these days as an imprint of Harper-Collins known for its romance novels, Avon Publications began as a paperback publisher circa 1941. Entering the comic book game in the mid-40s, Avon began putting out all manner of titles, including westerns, war comics, romance, and more. Though comic book horror wasn’t unheard of during the Golden Age (take, for instance, the origins of U.S. Jones), Avon’s editorial team’s decision to pioneer all-horror titles would reap big dividends by the mid-1950s. This issue begins with a story by Bob Fujitani, probably best known as the creator of Dr. Solar, Man of the Atom, wherein we meet feline uber-fan Carl Cattler, who wants only to buy an insurance policy. Fujitani, who was behind some of Archie’s unexpectedly gruesome Hangman strips, is actually pretty sedate, keeping the depictions of blood and dismemberment off the page. When a doctor tries to declare him ineligible for a policy, our man Cattler threatens to feed the doc to his pet tiger. Then, when the doctor faints dead away, he DOES… or so he thinks. His own greed leads to his downfall, as well as that of his pet, in a very muddled and confusing moral. It’s kind of joyous seeing the cartoony tiger in the midst of what should be a suspenseful story.

Next up, is the tale of Myron Morgan, who undermines his twist ending by starting the story already deceased. Myron’s life is perfect, ever since he met a strange tramp who gave him a bottle of… let’s call it “wishing fluid”, with the express condition that he never let the bottle become completely empty. It’s another completely puzzling story, as he ends up being doomed by his own child, who may or may not be a completely spoiled brat? It’s not entirely clear, but the story features inks by George Roussos, co-creator of Animal Man and B’wana Beast, so it’s pretty, at least.

The crown jewel of this strange agglomeration comes in the form of the third story, penciled and inked by 21-year-old Joe Kubert. When a U.S. bomber crashes on a remote island… Honestly, it’s both nonsensical and really racist, but suffice to say that the two-fisted American hero survives and calls his friends, who bring more bombers. Kubert’s work is quite good, though, and the main character resembles Golden Age hero Fearless Flint.

Of course, no  Golden Age comic book is complete without a comedy strip, which in this case features a specter known as Goofy Ghost and is absolutely NOT funny.

Of course, the splash page of the next tale more than makes up for that. The first rule of haunted houses is “Do not mock the haunted house.” Johnny and Rupert don’t respect that rule. The final tale is one that I’ve actually read before, in reprint form, wherein the title was changed to The Subway Horror. Here, it appears as The Strange Case of Henpecked Harry, an objectively inferior title, but it still packs a punch. Or maybe a “CRUNCH,” as Harry finds that murder has a very high price, especially when you kill the wrong woman. It’s the most successful overall story in this comic, though, in both art and story. All in all, Eerie Comics #1 (no relation to Warren Publishing’s black-and-white magazine of the ’60s, in case you were wondering) is one of those books whose place in history is more noteworthy than its actual contents, with a number of recognizable creators doing not-terribly memorable work that earns 2 out of 5 stars overall. Still, it paved the way for the later Eerie, for the Cryptkeeper and his pals, and even for classic ’90s Vertigo, so we must recognize its ground-breaking nature.

A smorgasbord of semi-successful stories that nonetheless holds its place in comic book history, paving the way for EC Comics, Vertigo, and the Houses of Mystery and Secrets.

It's interesting, but it's also run-of-the-mill '40s horror.