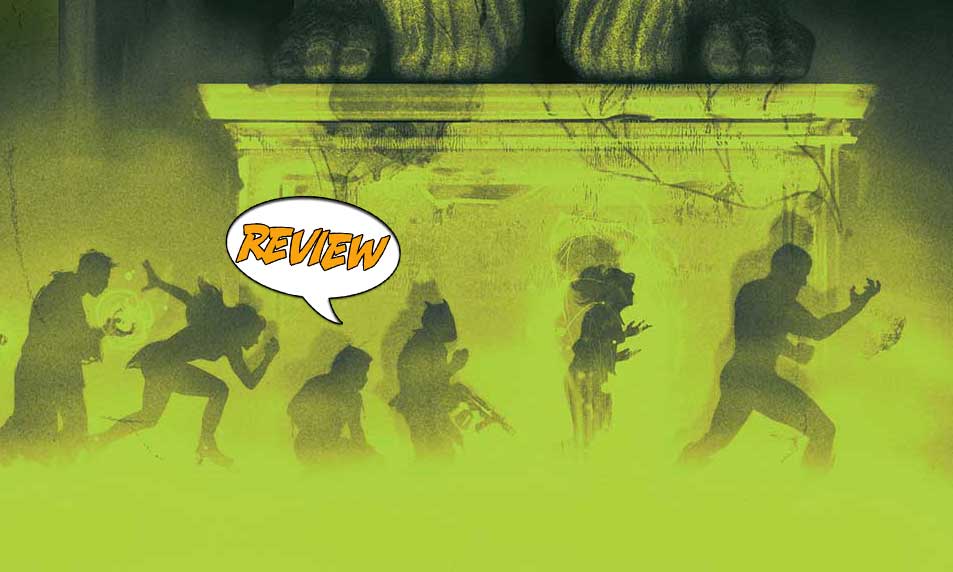 The team is assembled, they have their target and a plan. Now they just need to find Gorilla City.  Your Major Spoilers review of Rogues #2 from DC Comics, awaits!

Previously in Rogues: The down-on-their-luck ex-cons are back together for the heist of a lifetime, but every time Captain Cold thinks he’s got things all figured out, the rug is pulled out from under him.

STICK TO THE PLAN

Rogues #2 opens in the office of a DEO agent as she’s informed that The Rogues have gone missing.  Things then shift over to show the team hustling their way through Africa until they reach their destination.  Once there they get their hands on a boat and head up the river.  After some dissent among the team, they find themselves in what they think is Gorilla City.  After some investigating from The Trickster, they make their way to the actual Gorilla City.  Inside the city, Gorilla Grodd presides over his inner circle of gorilla gangsters and flushes out a mole.  Once inside the city, the team begins to re-evaluate the plan, but Captain Cold takes a firm hand and coerces everyone to keep going. Later, on his own, Captain Cold is confronted.

Rogues #2 tries to be Ocean’s 11, Indiana Jones, and American Gangster all at the same time.  The surprising thing is that it mostly pulls it off.  Right off the bat there’s a real sense of camaraderie among The Rogues, they might not really like each other but they recognize their history together and you can feel it weighing on everyone’s decision-making.  But, the real star of this issue is Gorilla City.  Here we see it re-envisioned as a 1960s/70s New York City style place, with seedy back alleys and Gorilla Grodd taking the role of a crime kingpin running the place.  At first, seeing gorillas walking around in plaid pants and fur-collared jackets seems somewhat silly, but it’s nicely realized and doesn’t take long for it to not appear so odd. The one area where this issue lacks a bit is in the journey.  The path to Gorilla City happens pretty quickly without much difficulty, so later on when some members of the team show some wavering conviction, it’s a hard sell because nothing that bad has really happened.

The colors in Rogue #2 are the highlight art-wise here.  The way they’re used to establish tone is exquisite.  Things transition seamlessly from tranquil pinks of a riverside sunset, to harsh yellows while enduring the oppression of a jungle, to the myriad of tones that exist while walking beneath neon lights.  Things get a little off though when dealing with some of the characters’ faces.  At times they get cartoonish and almost rubbery in a way that doesn’t jive with the more realistic and non-stylized character work in the majority of the issue.

Rogues #2 has so many different influences it’s trying to emulate and manages to actually do it. This is a well-done heist/adventure/crime/family book that has a distinct look and for those who are familiar with these characters will definitely be a new take on them, unseen before. 3.5 out of 5 stars.

Rogues #2 takes the story in a few different directions but manages to stay consistent and does a good job in putting these characters into a familiar story in such a way to make it feel fresh. But it does feel like there aren’t a lot of stakes here.