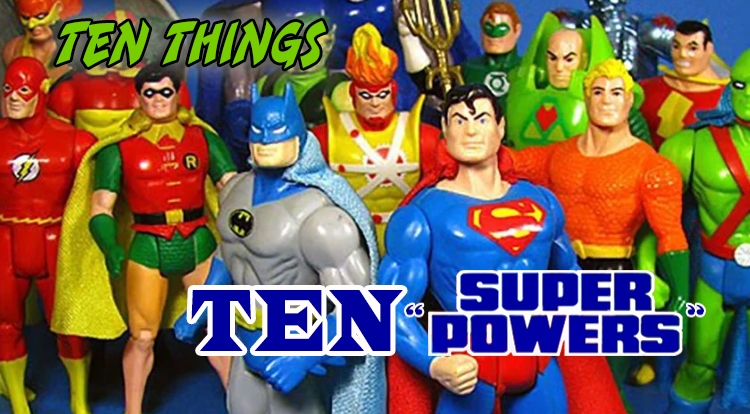 One need not have powers in order to be called a superhero, but sometimes the power is right in the name! Welcome to Ten Things: Ten Super “Powers!” A hero of the early 1960s, Morris Grant gained the ability to generate electricity after an accident at the Hoover Dam hydroelectric plant. He used his abilities not only to punch evil, but to advocate for Civil Rights, in the hopes of building a better future. Soul Power came out of retirement forty years later to help Static defeat one of his villains, showing that he still had soul power in his sixties.

If you think he looks like Black Lightning, that’s because he was originally written to BE him, but the creators weren’t allowed to use the existing hero. That makes the second time Black Lightning was left out of a superhero cartoon, as something similar had happened with Black Vulcan back in ’77. A member of the Team Supreme in the pages of Penthouse Comix, Manpower (real name unrevealed) is a broad parody of superhero tropes of the early 1990s. With colleagues like Bloodskull, Hotblood, and Death Killer, his antics were meant to mock the Youngbloods, X-Forces, and Extreme Justices of the world. Unfortunately, the team kept reappearing and quickly started to be treated seriously, a problem which rolled out of a larger issue at Penthouse Comix: The actual product wasn’t really very good. An astronomer by trade, Danica Maris was chosen by cosmic forces to wield the Star Power, allowing her to control and channel stellar energies. In addition to energy projection, she has something approximating Green Lantern-ring powers, allowing her to actually create her costume/armor out of pure cosmic force something something sword and shield of energy!

She also has the ability to travel in space without her bare toes exploding or freezing or whatever science says the human body will do in a vacuum these days. Born with the metahuman ability to channel thunderbolts and lightning (very very frightening, see?), William Twotrees joined the ranks of the Leymen, the super-team sometimes known as Primal Force. Able to not only throw lightning but generate his own electromagnetic fields and even generate an EMP, Will Power joined the team partly in the hopes of finding the absent father he had never met.

That pater-familias-in-absentia turned out to be seventh-son-of-a-seventh-son Johnny Thunder, whose enchanted Thunderbolt was the source of Will’s energies. Genetically engineered and mystically enhanced to be the ultimate super-solder, Julius Mullarkey was six foot eight inches (just over two meters) tall at the age of 18 months. Created by agents of the Mys-Tech corporation, Killpower was sent to capture a young woman who called herself Motormouth, only to have her break his conditioning and teach him that killing is actually morally wrong. Teaming up with Motormouth, Killpower went rogue, walking the Earth with her and having various adventures. Years later, Killpower was co-opted by Mephisto into becoming a killing machine once more, retaining just enough of his mind to beg the other heroes present to kill him. Earth: 2147. The legacy of the Metal Wars, where man fought machines… and machines won. The Bio-Dreads are monstrous creations that hunt down human survivors and digitize them. But from the fires of the Metal Wars arose a new breed of warrior, born and trained to bring down Lord Dread and his Bio-Dread Empire, known as the Soldiers of The Future! Their leader, Captain Jonathan Power, is the master of the incredible Power Suits, allowing any soldier to become a one-man attack force unto himself.

Sadly, even with creators like J. Michael Straczynski in the mix, the Captain’s kiddie show was brought down by its dark themes (including overt references to WWII Germany, such as the “Bio-Dread Youth”) and sky-high production costs, leaving Captain Power with a cliffhanger, still unresolved after 35 years. When Iron Man went against United States interests to protect his proprietary technology, the government collaborated with his competitor, Edwin Cord to create a failsafe. The Firepower armor is bristling with weapons, including a low-radiation nuclear device (!!), and is more fighter jet than powered armor. In Firepower’s first bout with Iron Man, pilot Jack Taggart destroyed the Silver Centurion armor and only barely missed killing Tony Stark outright. Of course, cutting-edge technology is only as good as the last development, and Stark built an even more advanced armor, specifically designed to bring Firepower down.

It was nearly 30 years before he dared show his big, dumb steel face again. A genius scientist, Professor Anthony Power became embittered when his son was left in a vegetative state after serving in the military. (It’s been a while, but I think he was explicitly in Vietnam in the original telling.) Power even sought telepathic help from Professor X of the X-Men, but came to blame his fellow Professor for failing to save his son. Creating a massive exoskeleton, Anthony Power transferred his mind into his son Matthew’s mind and set out to hurt Xavier by killing HIS metaphorical children, The X-Men. He failed, but later rebuilt the shattered Secret Empire before Moondragon drove him insane.

thanks to deuteranomaly, I hate his armor with a passion. An abandoned mannequin left to rot and absorb all manner of unknown substances, Brother Power was brought to life by a bolt of lightning in 1968. Discovering that his former tailor shop was now a haven for homeless hippies, the homunculus learned the ways of the Age of Aquarius. After a few adventures, he was rocketed into space by Ronald Reagan and left to orbit the Earth for eternity.

Stories shared by creators of the time were that one of DC’s editors petitioned the publisher to shut down the publication of the book because of its sympathetic portrayal of hippie culture, which said editor disliked. Brother Power’s creator Joe Simon has stated that he had actually FINISHED the artwork on the next issue when the title was canceled. In the altered reality created by Mephisto to eliminate the Avengers, Kamala Khan grew up not as a massive fangirl of Ms. Marvel, but as a massive fangirl of Squadron Supreme of America mainstay, Power Princess. Thanks to a magical circlet she encountered during her job as a museum volunteer, Kamala was able to channel powers like her idol’s and stop the illegal sale of artifacts. During that mission, she met Power Princess, who made Kamala her official sidekick and a member of the Young Squadron, a team of SSA junior partners. The intervention of Deadpool, of all people, convinced her that Power Princess was a fraud, but the Young Squadron decided to keep fighting for the right to counter the brutal methods of their hell-spawned super-mentors.

Once again, this week’s topic, Ten Super “Powers” is all me, but feel free to follow along @MightyKingCobra to suggest your own! There’s always more Ten Things madness on my Twitter or check out the full Twitter archive here! As with any set of like items, these aren’t meant to be hard and fast or absolutely complete, if only because three new characters called Power Man popped up while I was writing this! Either way, the comments section is below for just such an emergency, but, as always: Please, no wagering!