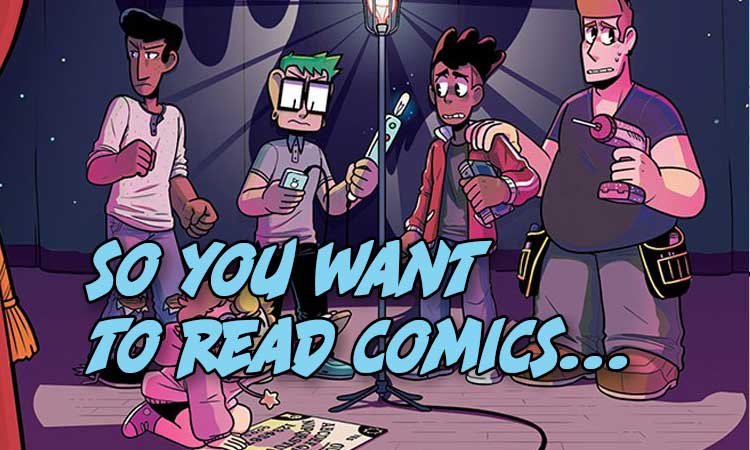 So You Want To Read Comics: Theater Kids Edition

Break a leg, it’s time for “So You Want To Read Comics”.  This is our weekly feature where we focus on a single topic or genre, then give you two comic book recommendations, perfect for new readers, based on that topic or genre.  This week we’re taking a look at comics for theater kids.

The history of theater can be traced all the way back to many early civilizations. There are very few cultures that don’t have a unique take on the art of telling stories through acting, costume, and make believe.  From the epics and tragedies of the Ancient Greeks, to the Kabuki and Noh traditions of Japan, to the storytelling practices of Indiginous Americans.  In more modern times, places like Broadway and The West End have kept the live theater flames burning, not to mention the countless young people who find friendship, belonging, and purpose in their local community or school theater companies.  Close to 17,000 students participate each year in theater productions in the US both as actors and as backstage production crew members.  But sometimes it’s not always easy to catch a show, but that doesn’t mean the love of theater can’t be expressed in other mediums.

It’s hard to explain how magical being backstage during the production of a performance can be.  At times it can feel like being part of a whole different world, with its own rules, politics, and experiences.  But, somehow that manages to be captured here in The Backstagers.  This comic series tells the story of Jory, a new kid at school who gets adopted by the titular group and he quickly gets wrapped up in the adventures and fantastical world behind the curtain.  While this is a book skewed towards younger readers, it doesn’t shy away from topics like romance, bullying, and the strife that comes with trying to find a place in the world.

While most people would associate opera with music rather than theater, it’s often forgotten that opera has a dramatic side and that the music is in service of telling a story. Unfortunately though, because opera is not easy to translate into other languages, the language barrier makes it difficult to consume these stories. But here in this collection, comic creator P. Craig Russell takes on the task of adapting these stories into comic books.  Amazingly Russell manages to not lose any of the more surreal aspects of opera by replacing the music with whimsical, art nouveau-esque art, that does an excellent job taking the reader into the mythical worlds that would have been the job of a belladonna during an actual performance.

So what are some of your favorite plays, musicals, or operas? Did you check out either of these recommendations?  Let us know in the comment section below.