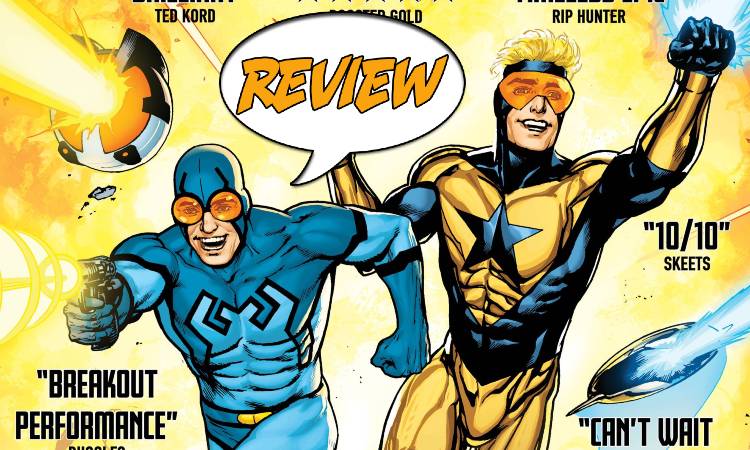 Booster and Beetle finally hit the big time, but… can it last? Your Major Spoilers review of Blue and Gold #8 from DC Comics awaits!

Previously in Blue and Gold: Keep your friends close and your enemies closer! Things have never been easy for Booster and Beetle as they set out on their new business venture where no job is too small, but now a threat from within threatens to bring everything crashing down.

A mysterious virus has hit the servers at Blue & Gold Restoration, and it could delete our heroes for good!

In a remarkable twist, this issue begins by rebuilding the credibility of one of the most maligned Rogue’s Gallery members, as Ted and Booster take on the Rainbow Raider, only to find his hidden stash of art. Not only has Roy G. Bivolo been stealing classical paintings from around the world, but he has also collected some that have been out of circulation since being lost in the second World War, to the tune of 860 MILLION DOLLARS. The notoriety from this bust, as well as the reveal of the truth about Bigfoot and the Loch Ness Monster has given Blue & Gold Restorations newfound cache, but their crowdfunding efforts haven’t kept up. Before they can figure it all out, though, Beetle’s Buggy is attacked by the being least likely to turn on our heroes: Buggles herself! (Given that Skeets has been co-opted at least three times throughout history, that’s not a big shockeroo for me.) Transported to the Badlands, the boys are ambushed by the mysterious Black Beetle, who takes great care in dressing down Booster for his stupidity, only to fall prey to B.G.’s cleverness, a time portal, and some misdirection.

Oh, and his identity is finally revealed…

…and it’s the last person you would expect! After nearly fifteen years, though, this reveal IS an unexpected swerve, and it gave me a real jolt. Black Beetle and Booster going toe-to-toe is a great sequence, but for my money, the best moment of the issue comes as Blue Beetle arrives with his personal cavalry charge, riding an angry triceratops. Though I’ve not paid a lot of attention to Ryan Sook historically, his work here is very different from what we saw in the pages of Legion of Super-Heroes, and even the earliest issue of this book, with slightly less detailed (but somehow more expressive) faces all around. His combat sequences are exemplary, but I think my favorite moment is Ted and Michael having a couple of beers together while hanging out and recovering in the Late Cretaceous. The issue ending also provides our team with corporate funding from an old friend (named Batman), finally putting their venture on sound financial footing. I can’t help but read Batman’s admission that the world needs Blue Beetle and Booster Gold as writer Jurgens’ own opinion, but he/they are absolutely right: A DCU with more Booster and Beetle is a better DCU for everyone.

In short, Blue and Gold #8 is not just the ending that this series really needed, but a welcome return to old-school BandB antics, with a slightly more serious tone, a smarter Booster, a more worldly Beetle, and a creative team that seems to be having fun as well, earning 4 out of 5 stars overall.  With the current business model at DC favoring miniseries over ongoings, I hope to see Dan, Ryan, Ted, Michael, and company back with Blue and Gold Season Two sooner, rather than later.

Black Beetle's identity is liable to annoy some readers, but this issue's ending and the fact that B and B manage to give us a *FUN* adventure even while battling for their lives makes me hope for Blue and Gold Season Two.