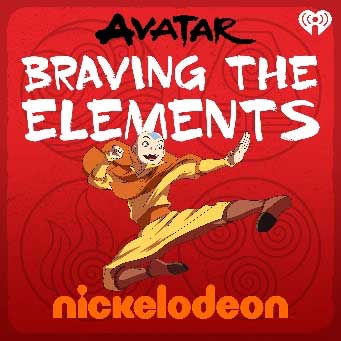 Nickelodeon and iHeartMedia today released a trailer for the second season of its fan-favorite original podcast, Avatar: Braving the Elements, the official companion podcast for Avatar: The Last Airbender and Legend of Korra. In season two (40 episodes), hosts Janet Varney (the voice of Korra) and Dante Basco (the voice of Prince Zuko) move on to re-watch Book 2 of Avatar: The Last Airbender, which sees the introduction of beloved characters including Azula, Toph, Ty Lee, and Mai. Co-produced by Nickelodeon and iHeartMedia, the second season of Avatar: Braving the Elements will be available on iHeartRadio and wherever else podcasts are heard starting Tuesday, May 3. Joining Janet and Dante this season as guests are Jack De Sena (the voice of Sokka), Grey DeLisle (the voice of Azula), Cricket Leigh (the voice of Mai), and James Sie (the voice of Cabbage Merchant). Original series creators and co-chief creative officers of Avatar Studios Michael DiMartino and Bryan Konietzko return to share how they felt when the original series was renewed for a second season. Additional guest stars will be announced in the coming months.

Avatar: Braving the Elements extends the Avatarverse for loyal fans who grew up with the beloved franchise. In this weekly podcast, hosts Janet Varney and Dante Basco continue to re-watch every episode of Avatar: The Last Airbender and break down key themes, notable battles, and behind-the-scenes trivia. Special guests from cast members to producers to superfans drop in to explore elements of Book 2 and reveal secrets behind the making of the series.

Ready to explore the amazing world of Avatar: The Last Airbender? Nickelodeon’s official companion podcast, Avatar: Braving the Elements is back for a second…

About Avatar: The Last Airbender

Nickelodeon’s Avatar: The Last Airbender emerged from its three-season run (61 episodes), from February 2005 to July 2008, as one of the most beloved animated properties in history. Honored with a Peabody Award and Primetime Emmy, along with multiple Annie Awards and Genesis Awards, the series follows the adventures of the main protagonist Aang and his friends, who must save the world by defeating Fire Lord Ozai and ending the destructive war with the Fire Nation.

In addition to the series’ success, the property has spawned into several bestselling book series, which continue to roll out new original stories. The graphic novel series most recently spent two months on the New York Times Graphic Books Bestseller list in 2020, and the young adult novels have spent 22 cumulative weeks on the New York Times Young Adult Bestseller list and have shipped over a quarter million copies. The DVD and Blu-rays are also incredibly successful, with the “Avatar: The Last Airbender: The Complete Series” generating nearly $38MM in retail sales since its 2015 release.