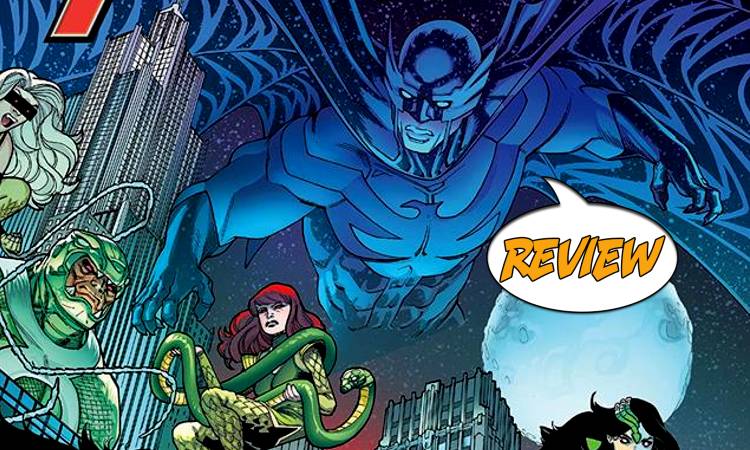 After Mephisto’s alteration of the universe went south, the Squadron Supreme of America no longer existed. So… why is Nighthawk still around? Your Major Spoilers review of Avengers #55 from Marvel Comics awaits!

Previously in Avengers: Nighthawk of the Squadron Supreme of America has returned to the scene with a dark and mysterious purpose. Is he friend or foe to the Avengers? Nobody’s sure.

But there are no such questions about the deadly new incarnation of the Serpent Society!

STAYING AHEAD OF THE NIGHT

The first page of Avengers #55 is a lovely tribute to artist George Perez, an Avengers mainstay through multiple decades, who has been diagnosed with inoperable pancreatic cancer. After that touching Avengers moment (repurposing George’s own art from the legendary early-2000s run), we catch up with Kyle “Nighthawk” Richmond of the Squadron Supreme of America, racing westward in his Hawkmobile. Having discovered that he’s not actually human, but a creature grown in a vat and animated by the magic of Mephisto, Richmond has been facing an existential crisis, but an approaching Quinjet brings a more real problem in the form of the Black Panther. Rather than a fight, though, he brings an offer: Return to the fold as American ambassador to Wakanda and help the Avengers bring down Mephisto. The first step comes in the form of the Serpent Society, whose members had mostly gone straight… until they all fell into the thrall of Mephisto and went on a brutal killing spree. The Mighty Avengers send in Nighthawk as a scout, then prepare to enter the snake pit for battle…

…only to find that Nighthawk has already won.

For all the whining of “the usual suspects” online, Aaron’s run on Avengers has never ceased to be exciting for me, with wild twists and turns and unexpected moments, and this issue is no exception. From T’Challa hand-picking Nighthawk to replace him, to new team members Valkyrie and Namor, to tiny in-jokes hidden in Mephisto’s army of 616 alternates, it’s a fun issue that resets the board for a new arc. Garron’s art works better than Ed Brubaker’s for me, especially in moments like the double-page army of devils and the Serpent Society’s bloody rage. With Ghost Rider busy in the pages of Avengers Forever and She-Hulk playing it solo, the addition of Jane Foster’s Valkyrie adds some much-needed power, while Namor brings the necessary “wildcard guy” factor that a book with a cast this size needs. My only complaint is that I only missed two issues of this book, but it feels like I have been gone for six months. The speed at which this plot moves is both gratifying, packing every issue with story, but heaven help you if you lose focus for even a second.

They pretty much had me when one of the alternate Mephistos looks just like Mr. Mxyzptlk, but Avengers #55 upends the team in fun ways, taking away their headquarters, their chairman, and much of the Volume 8 support system, but adding in new characters and situations that add up to 4 out of 5 stars overall. Garron’s full-page overhead shot of the team at their meeting table is almost worth the price of admission by itself, but if you’ve been looking for the proverbial jumping-on point for Aaron’s Avengers, this is the comic book for you.

It's an issue that starts with a lovely tribute to George Perez, throws everything into chaos and rings in a whole new Avengers lineup, with the promise of more new members in the future. It's a nice jumping-on point.