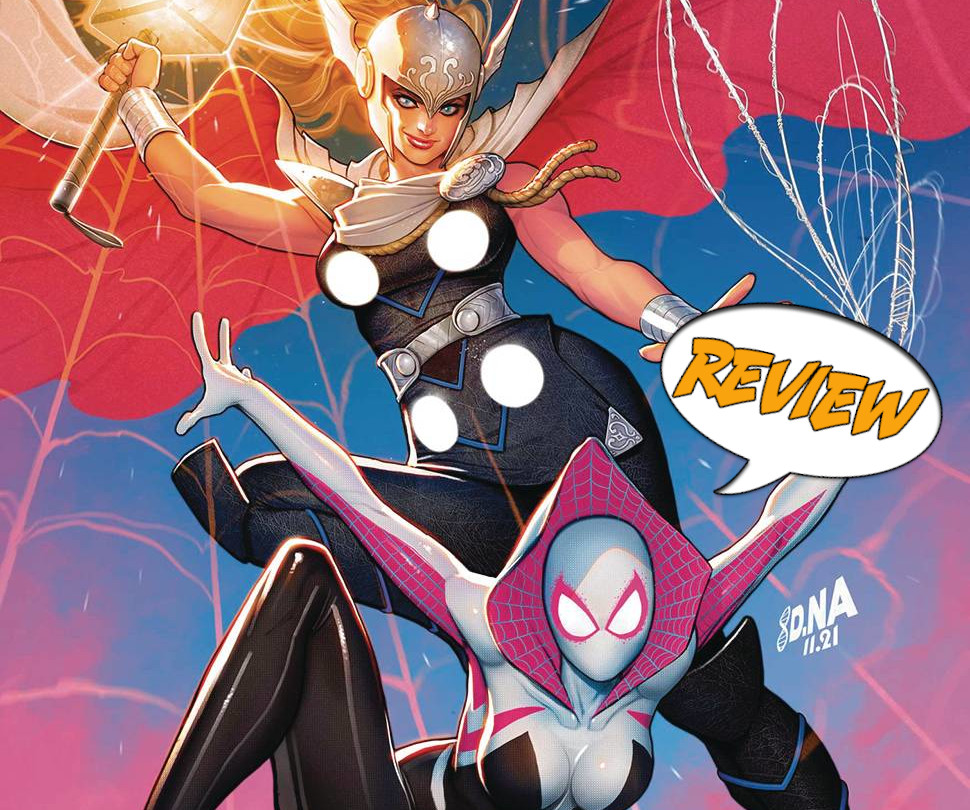 Ghost-Spider and Thorgwen are traveling through the multiverse to try and figure out who is rewriting their timeline! Check out their crazy adventures in Spider-Gwen: Gwenverse #2 by Marvel Comics!

Previously in Spider-Gwen: Gwen Stacy is a hero Ghost-Spider! Her home dimension in the low-stakes Earth-65. She often travels the multiverse looking for more challenges. However, a pop idol from the future named Finale completely altered Gwen’s home dimension and created five distinct Gwen Stacys. Now she is looking for alternate versions of herself.

Spider-Gwen: Gwenverse #2 starts with Nightbird (a Gwen Stacy version) and the Terminal Six searching for the Ghost-Spider for Finale. Finale is frustrated by the lack of results and tells them to do whatever they have to get Ghost-Spider. Meanwhile, Gwen and Thorgwen have found Gwen Rodgers, the alter ego of Captain America. Thorgwen and Gwen Rodgers get into a tussle until Rodgers suddenly disappears. Spider-Zero sends Thorgwen and Ghost-Spider to New York City, where Gwen Rodgers fights Wolvergwen. Suddenly, the fight is interrupted by two supervillains called The Roach and Fossil. After defeating them and escaping, the quartet decides to work together to figure out what is going on.

Man, this review is a mouthful with all these names.

I struggled with Spider-Gwen: Gwenverse #2. The plot moves very fast in this comic, and the characters seem one-dimensional. From my perspective, I think the creative team is rushing to unite all the Gwens instead of giving them proper space to sit and process. There is a writing technique called Scene and Sequel, which means that scenes need time for people to react. And this issue doesn’t give the characters or the readers space to understand what is going on. Even with multiple comic reads, I couldn’t get myself invested in any of the characters. There is a lot of potential to have a lot of fun interactions that characterize the story. Instead, we resorted to action and fighting to move the plot forward.

Spider-Gwen: Gwenverse #2 did not grasp me like the first issue. I think the comic is trying to hit specific story beats so they can spend time on other things later. This comic needs to slow down the pacing for the next issue, focus on character interactions, and solidify this team. 3 out of 5 stars for Spider-Gwen: Gwenverse #2.

Spider-Gwen: Gwenverse #2 moves at a fast pace. Too fast for my liking.