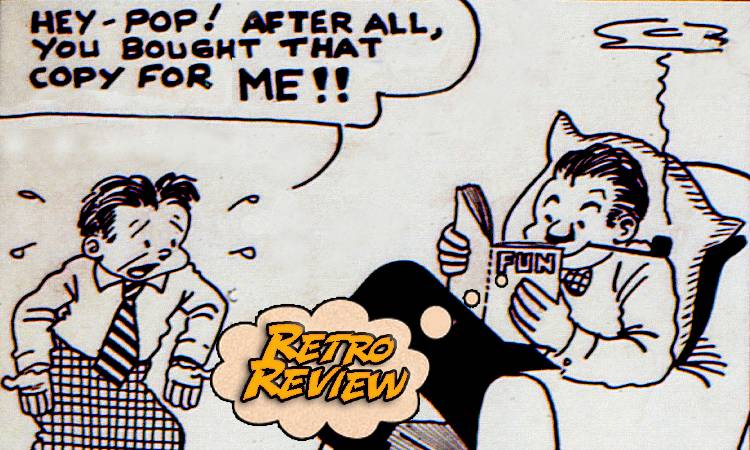 Sixty-eight pages, all in color for a dime, plus a little bit of superhero history, almost two years before the debut of the first superhero! Your Major Spoilers Retro Review of New Adventure Comics #12 awaits! Previously in New Adventure Comics: If you want to be specific, there WAS no New Adventure Comics before this issue. If you want to get pedantic, there was still no such thing as New Adventure Comics even once this comic hit the stands, as the indicia (which contains the legal name of the publication for U.S. Mail purposes) still lists this book as New Comics, the title that the book debuted with in the winter of ’35. That wouldn’t be updated until issue 15, the same issue that debuted the iconic Adventure Comics logo, which would remain the book’s title until its cancellation in 1983. That means that the issue not only predates the book’s best-known title, it also predates the superhero stars that would come to define Adventure Comics. It even predates the debut of the prototypical superhero himself! But that doesn’t mean that the forces that would create those concepts weren’t already in play. Among this issue’s offerings (which include the western adventures of Captain Jim of the Texas Rangers, then a quasi-historical tale of Vikings, followed by a Prince Valiant knockoff strip, an illustrated adaptation of H. Rider Haggard’s She, and no less than FOUR strips with truly disgusting racist imagery) comes the tenth installment of Federal Men, by 23-year-old creators Jerry Siegel and Joe Shuster. This story features the debut of a new character, a man named… JOR-L! Federal Men stars Steve Carson, an agent of the FBI, whose adventures started out somewhat realistic, but got wilder and more dramatic with each issue. If the ancient microfiche copies of even older paper are too small for you to read, this story features a different premise, as Carson asks the learned Professor Grant what law enforcement might look like in the future. He posits this “imaginary story” of the Interplanetary Federation, a crime-busting agency that uses “thought-vibrators” to predict crime. Their top man is Jor-L, who quickly tracks down the brains of the latest criminal operation. It’s the bandit queen, Nira-Q, who returns to action after an unseen adventure that led him to believe her dead, and she quickly takes the ace sleuth of the spaceways into her custody. Having recently been reading Jerry and Joe’s early work on Doctor Occult (also known as Doctor Mystic, which is another long story), it’s gratifying to see how quickly Joe’s art progressed. This story’s ships feel very much like what we’ll see not long after in Superman’s origin,  while the backgrounds are much more detailed and interesting than Doc Occult’s stories. Some, like the first panel of this page, are downright majestic. While Nira-Q prepares to fire him into space, Jor-L slips away into the shadows, downs his invisibility pill, and starts dismantling her forces. Back in the present of 1937, Professor Grant explains how her pirate crews collapsed, then explains how the future of crime-stopping won’t need prisons…

…because of Doc Savage-style lobotomies! To be fair, all the story says is “brain operations” to correct their criminal tendencies, but the leucotomy was an exciting new technique when this comic hit the stands, and various forms of fictional psychosurgery are all over pop culture well into the ’50s. Steve Carson of the Federal Men only lasted through the summer of 1942, a point when Jerry and Joe had already created and sold their creation, Superman, to DC Comics. At nearly seventy pages, with the longest story lasting four pages, New Adventure Comics #12 is packed with Golden Age entertainment/nonsense, including a number of “bigfoot” cartoons and a couple of learning opportunities for the kids who found it on the newsstands. Maybe it’s just me, but I find great enjoyment in the fact that one of these “Did You Know?” facts actually ends with “NOBODY KNOWS!” The bar for educational content was much lower in those days of mentalism, hucksterism, and Keynesian economics. All in all, though, New Adventure Comics #12 is an interesting footnote in the careers of Superman’s creators, using the name Jor-L almost two years before it was given to Superman’s daddy, with the rest of the issue ranging from just okay to offensive racial stereotypes, leading to a better-than-average 3 out of 5 stars overall.

As an aside, though Kryptonian papa Jor-L was first *named* in 1939, in the Superman syndicated comic strip, he didn’t actually appear in comics until 1945, in the pages of More Fun Comics #101, the first appearance of Superboy, a comic which became a major factor in Siegel and Shuster’s exit from DC Comics and the decades of bad blood and lawsuits when came next.

The use of the name Jor-L makes this book noteworthy, and the strip is cute enough, but there are far too many things that didn't age well throughout the book to fully recommend it.