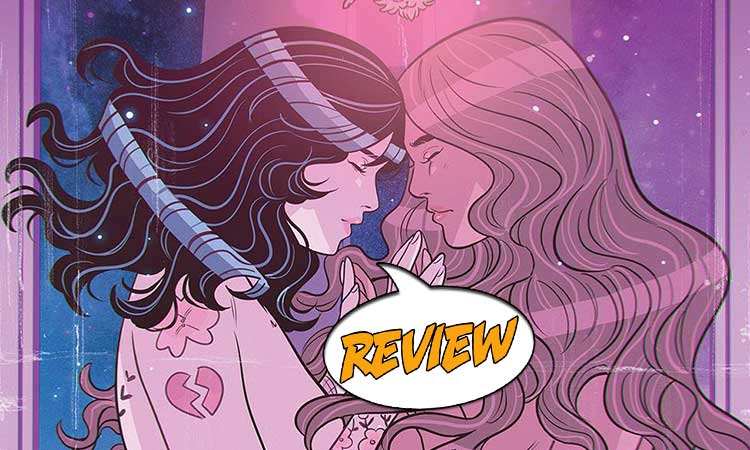 It’s time for Natasha to tell her side of things.  Your Major Spoilers review of Bolero #4 from Image Comics, awaits!

Previously in Bolero: Stuck in the anti-door dimension, Natasha learns the mysterious origins of Capgras and is forced to confront hard truths about herself

THE OTHER SIDE OF THE COIN

Bolero #4 opens with Natasha, Devyn’s Ex, telling her the story of her early life, the struggles her family faces, and the turmoil of picking up everything and moving to a new city and school.  She then goes on to explain how she and Devyn met and how Devyn’s homelife spilled over into hers.  The story then goes into the details of how things started to go wrong, and how things eventually deteriorated to the point of break-up.  Afterwards, Natasha and Capgras talk about the other versions of her that have spent time with the demon and whether or not they’ve ever encountered a version of Devyn and Natasha that made it.  Natasha then leaves the pocket dimension to talk things over with Devyn.

As a series, Bolero has not shied away from showing an honest look at failing relationships.  That reaches its peak here in Bolero #4.  What makes the depiction of a relationship so real is how much restraint the writers show.  This might come as a surprise, considering that this whole series is about cat demons and jumping around dimensions, but when it comes to the interactions between Devyn and Natasha, things never dip into soap opera territory.  Rather than getting some tearful breakdown or massive romantic gesture, there’s a quiet acceptance of the nature of the relationship, which in itself is more piercing than something more grandiose.  The one thing that seems off with this issue is how final it feels, for a penultimate issue.  Things feel complete here, there’s a resolution and a good sense of where the characters are at, so the fact that there’s another issue coming makes the emotions generated by this ending feel temporary.

As part of the recap from Natasha’s point of view, we get to see a sort of montage of the various different universes the characters have been in.  It’s nice to see just how varied things could be while also being thematically consistent in this series.

Bottom Line: A Satisfying Conclusion, That Isn’t A Conclusion

Bolero #4 offers a nice shift in perspective that allows readers to get a more complete picture of the events of the series.  By the end of this issue, there’s a nice resolution among the characters about their relationship, which makes it unclear where the series goes in its final issue.  4 out of 5 stars.

Bolero #4 seems to conclude what has been a very restrained and nuanced look at certain phases of a relationship that don’t get a lot of attention. The fact that there’s one more issue though, makes this conclusion uneasy for now.