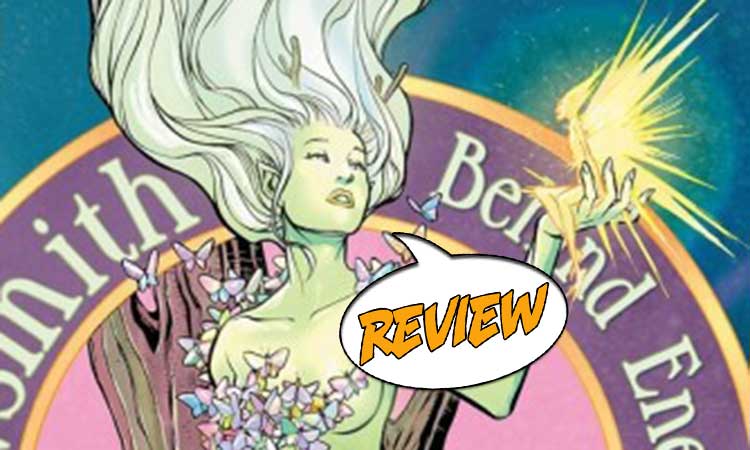 Fletcher and Guy have left the prison camp far behind. But what is Guy’s actual mission and what part does Fletcher have to play in it? Find out in Arrowsmith: Behind Enemy Lines #4 from Image Comics!

Previously in Arrowsmith: Behind Enemy Lines: Fletcher finally meets his contact, Guy. They must escape from the camp so Fletcher can reach his dragonet and get is orichalc chips. A few nights later, Guy uses his magic to destroy much of the prison camp. In the ensuing chaos, the captured airmen call for their dragonets and start to fly away. They are attacked, but Guy and Fletcher slip away over land and then take a shortcut through the Outer Marches of the Fae lands. This lets them travel further and hide their trail. They meet Guy’s contacts from the resistance and get a chance to rest and change clothes.

MAGIC, POLITICS, AND THE MISSION

Arrowsmith: Behind Enemy Lines #4 opens as the Black Baron surveys the destruction of the prison camp. Several prisoners were killed and more captured. But the Baron wants to know what has happened to the man he is looking for. The Agents of the Crux confirm that that man was at the camp but is not among the dead or the captured. The Baron has other allies. He calls for a couple Lupa, essentially werewolves, and talks with one of them (Tibor). Tibor tells him of two men who fled, hid their trail well, but were headed north and west. He sends the Lupa to follow them even though the Crux warns him he is putting his soul in danger by associating with them.

Fletcher awakens alone, after the seduction of the previous night. Guy returns, seeming to know what happened, and teases him. Fletcher takes some affront to this. The tension carries on as Fletcher remembers how many of his comrades died in their escape. Guy reminds him that this is war, and some things are bigger than the lives of individuals. This brings us back to the mission Guy is on. Fletcher hands over his orichalc chips and Guy learns something, but all he says is that they don’t have much time.

After taking to the skies for a while, they stop for a break and Guy tells him more, which fills us in on some history. With the Peace of Charlemagne, humans made a pact with the Lightborn, and barriers were set to keep humans out of the Fae lands. But the Allied Powers are negotiating with the Seelie Court for safe passage through their lands – passage that would let their armies travel anywhere undetected. The Central Powers learned about this and took a hostage, a middling rank princess of the Lightborn named Lyraeli. Guy needs to get her free and home before anyone realizes what happened to her. His only way to find her is through the Trolls, and he needs Fletcher because of his friendship with a Troll.

Guy also informs Fletcher that he is technically royalty. This comes back a few days later when Fletcher asks about the magic that he can do. In this world, there is a connection between magic and the land, and between the land and the people. Power flows into the kings in exchange for their protection of the land. With time, that power was shared with lesser nobility. With time and intermarriage, those connections form new links with the power of related lands. The only trouble is that by using those powers, Guy revealed his ancestry to the enemy.

A PERFECT FUSION OF MAGIC AND REALISM

One of the things I particularly like about the art of Arrowsmith: Behind Enemy Lines #4 are all the little details that add so much flavor to the world. The Black Baron has a capelet that matches the skin of his dragonet. The Lupa, in human form, have tattoos barely visible against their dark skin. And the rough farmhouse in Occupied Swabia looks like it is from that region of the world. It is in part because the time and place are so well defined that the magical details that have been added to world appear to belong.

I do love the dragonets. They’re companions more than pets, and we can see they have a close bond with the person they’re teamed with. Hilda enjoys being reunited with Fletcher as much as he enjoys being back with her again, and it is obvious how much they both love flying. But when Guy becomes more cautious, it makes Fletcher wary, and Hilda picks up on that as well.  There’s also a fun panel of her diving into a river, hunting fish – yet another small detail that shows us more about the world.

As with any good wartime story, Arrowsmith: Behind Enemy Lines #4 is full of danger that slowly increases even as Fletcher becomes more committed to the mission. But has Fletcher been drawn in only because he can speak Troll, or is there more to him than that?

Fletcher Arrowsmith has escaped and learns about the mission he is to be a part of.