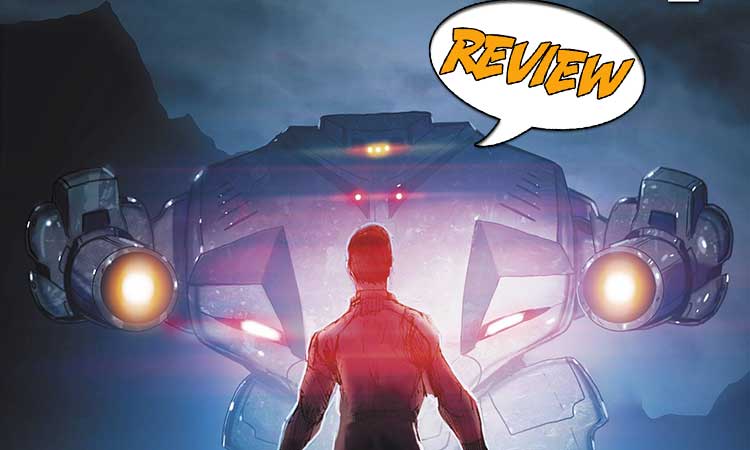 Sam’s death is just the cost of doing business, but Troy’s death brings swift action. Peris is singled out for execution, but why is the outpost being shut down and the other workers dispersed? Find out in Armorclads #2 from Valiant!

Previously in Armorclads: Genetically engineered workers known as Ironclads toil, mining the valuable mineral known as The Pure. When Sam, one of the Ironclads, gets caught in a collapse, the Alphan Sgt. Troy prevents his friends from helping him. They cannot afford to risk more than one Ironclad suit. Sam dies. Later, Troy takes a band of Ironclads out to investigate the area where a convoy of Pure was last known to be. When Troy is attacked by alien bugs, Sam’s friend Peris orders his friends to stay put so as not to risk their suits. Troy is killed, and the young workers drive the bugs off and discover that the convoy had been attacked.

Armorclads #2 opens at Outpost 12 after a band of Amorclad Alphans arrive to look into the death of Sgt. Troy. They scan the workers, who are just teenagers. They realize that one is missing, and Peris tells them it was Sam. They know him by his number rather than his name, something which further demonstrates the systemic dehumanization of these workers. They do also know that Sgt. Troy was killed. Lela makes a comment about how he can be identified by name, and this draws the attention of the Alphan. He asks her what happened, and she tells him Troy was ambushed by bugs. The Ironclads only survived because they were lucky.

While this may be true in part, the Alphan does not believe that Troy would have sacrificed himself to save a bunch of grubs and their suits. He demands to know the truth and orders his forces to kill anyone who doesn’t answer his questions. At this, Peris admits that he was the one who let Troy die the way he had let Sam die. The Alphan pulls him aside and orders the rest to suit up. They will be going to different Outposts. Outpost 12 is being shut down.

The Alphan takes Peris outside to execute him, not just for letting Troy die, but also for having the gall to feel that he somehow matters, that he is anything more than another piece of equipment. But he receives a communication from the Governor. Lela later sees him taking Peris away.

Once the other young people are in their Ironclads, they move out. Not only are they linked together with heavy chain, but the Alphans have outside control over their suits. They can keep walking and they can talk, but they cannot move their arms. They approach the next outpost and find it under attack by Legionnaires, mercenaries who want Pure and anything they can strip from Armorclads. The Ironclad workers are locked down, sitting in a swamp, unable to move, while their Armorclad escorts attack.

Pulo and Jac do manage to work within their suits just enough to jam the connection to the cruiser that is controlling them. They are free, but Lela encourages them to help save the Ironclad workers from this outpost. That they do, but this brings them face to face with the Legionnaires. Ironclads are suits for working; they are not designed for combat. But Jac helps Lela gain access to an Armorclad suit, and this may tip the scales!

THE GRIMY UNDERPINNINGS OF SOCIETY

The art of Armorclads #2 brings the setting to life. This may be a futuristic world, but it is not an idealistic one. The outposts are heavy domed structures. They are all about the work and not much about the workers. The designs of the Ironclads and the Armorclads also reflect this weightiness. They are meant for utility, whether that is mining in dangerous conditions, or being an intimidating enforcer. Even so, on Xeru, all these suits look worse for the wear. This may be an important planet, but the work is dirty and demanding.

I like that the young people are smart in this book but they are still the underdogs. It is their suits that have the physical strength for the work, which makes them seem even more expendable, as though their only purpose is to be the thing that drives the suit. The contrast with the Alphans is stark. The ones we have seen are adult males who are significantly larger and stronger than the kids who do the grunt work. This contrast highlights exactly who has the power here.

BOTTOM LINE: DEFIANCE CAN BE RISKY

Armorclads #2 is not just the story of a handful of plucky young workers. It is the story of a system that thrives on inequality and may be plagued by corruption. And to complicate matters, the Legionnaires are no friend to anyone.