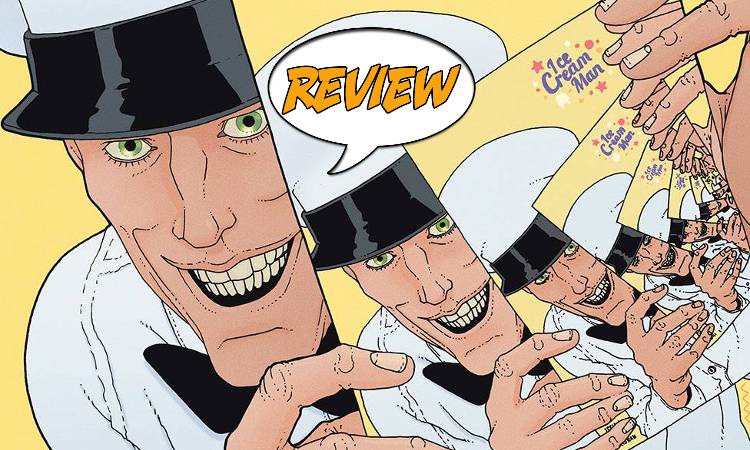 Presenting, for no one, the last will and testament of W.M. Parsons. Your Major Spoilers review of Ice Cream Man #29 from Image Comics awaits!

Previously in Ice Cream Man: In the parlance of the comic collector, an infinity cover is one where the image on the cover shows the image of the cover, which in turn shows the image of the cover, and on and on into theoretical infinity. The earliest example that I’m aware of is Batman #8, from 1941, which is fascinating to me and makes me wonder how exactly they pulled it off in the days of photostats and hand-trimmed cover logos. The sight of such a cover on Ice Cream Man, a book that delights in playing with the form and function of comic books is wonderful, especially given that most of what this book makes me feel existential dread and the crushing weight of my own mortality.

In an out-of-the-way bar, a man named Corey is drowning his proverbial sorrows in a glass of beer. When asked what his “deal” is, he responds that his best friend has died. Will Parsons (who, it might be noted, has the same initials as this issue’s writer W. Maxwell Prince and who bears said writer’s face in his coffin) lies in his casket, as the eulogy is read by the titular Ice Cream Man, who is in truth some sort of multidimensional being known as Riccardus. It’s a sad little tale, full of regrets and missteps, family and friends that he doesn’t know how to talk to, and very little of note to leave behind. As his last words are read aloud, Corey is approached by an anthropomorphic fox carnival barker who offers to show him the truth about the afterlife. The resulting adventure is both mundane and maddening, ending with Corey at Will’s funeral once again, receiving a bit of wisdom… and a horrible gift.

AN AMUSEMENT PARK OF THE SELF

This issue feels much more personal than previous issues of Ice Cream Man, which strangely makes it one of the least successful for me. The list of regrets that defines Will Parson’s life is perfectly average, nothing special, and yet somehow, the most important thing about his life and existence. As for Corey’s experience at the Circus of Will, riding The Grief Machine, it’s more melancholy than many of the stories we’ve seen in the book so far, and also somehow… gentler? There’s a sense of reality to this particular death, bearing the face of the author himself, that (intentionally or unintentionally) blunts the fangs that define ICM stories. Morazzo’s art is as well-done as ever, providing the emotional underpinnings that make the story work, giving us realistic depictions of Parson’s head throughout the carnival and somehow making a squid the most human and emotionally relatable character in the book.

The last few issues of the book have all been exemplary, which means that Ice Cream Man #29 only suffers in comparison to what has gone before, meaning that this issue’s examination of mortality and mourning, with the usual soulful art and a story that feels like it has more of the writer in it than usual, is still a fine read at 3.5 out of 5 stars overall. It’s not a miss, by any means, but it’s still a better-than-average comic book experience and a book worth your time.

One of the more depressing issues of the series, in ways intentional and unintentional, but still an interesting read.