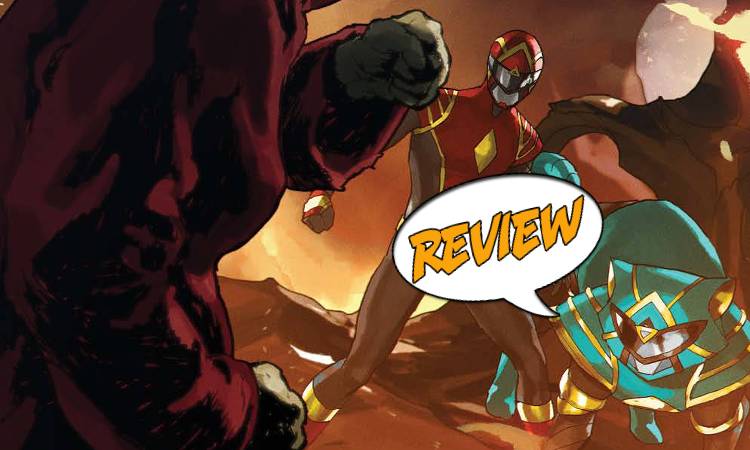 The Omega Rangers are about to learn why you never split the party, no matter what you’ve seen on Scooby-Doo. Your Major Spoilers review of Power Rangers #18 from BOOM! Studios awaits!

Previously in Power Rangers: The Omega Rangers take a big risk, splitting up after receiving separate distress calls from two distant planets. Zack and Trini bring an unexpected guest back to Safehaven after a battle, while Jason and Yale encounter a rogue [REDACTED], determined to avenge the destruction of his home planet!

TWO EMERGENCY SIGNALS AT ONCE?

Having returned to planet Safehaven, the Omega Rangers have set up a new headquarters and taken some time to recover from the Eltarian War. At Jason’s behest, Xi has been monitoring space transmissions, and has received not one, but TWO distress calls. Zack and Trini set out for one, finding a wrecked spacecraft… and the space dragon that caused it to crash! Jason and Yale set out of the planet KO-35, where they find nothing but death, as someone or something has killed most of the population. Zack and Trini wage a desperate battle against the space dragon, barely defeating it by exploding the wreck’s space drive. As for Jason and Yale, their battle with cannibal aliens features a lot of references to his Red Omega Armor looking somewhat familiar, a bit of foreshadowing that ends when the last attacker is ambushed…

The post-Shattered-Grid timeline is a little confusing, but this story establishes that Andros was once again active on KO-35 before the Power Rangers became the Turbo Rangers (something that may never happen in the comics). The death of nearly his entire planet is new, however, and I was surprised by his appearance in this issue. As the first story of a new arc, there’s no telling where either of these stories might end up, but I’m interested in both of them, especially with Baiamonte handling the art. The combat sequence of the Blue and Red Omega Rangers in action is truly beautiful, especially since the Blue Ranger is a giant alien tiger-beastie. As much as I enjoyed seeing the crossover of both books throughout the Eltarian War storyline, it’s good to see this team on their own again, though I will argue that they need more Ranger. (Here’s hoping that Andros’ appearance is a step towards that goal.)

As much as I enjoy the art in Power Rangers #18, special note must be given to the coloring, which enhances both the quiet moments (like seeing an alien baby suddenly turn into an alien school-age child) and the loud ones (like the massive explosion that dispatches the space-dragon), pulling together a creative endeavor that really sings, earning 3.5 out of 5 stars overall. It’s a new era for the Omega Rangers, which makes for an exciting first chapter of the Charge To 100.

The Omega Rangers have two issues, one of which is a once and future Ranger, but the art and story are up to the task.