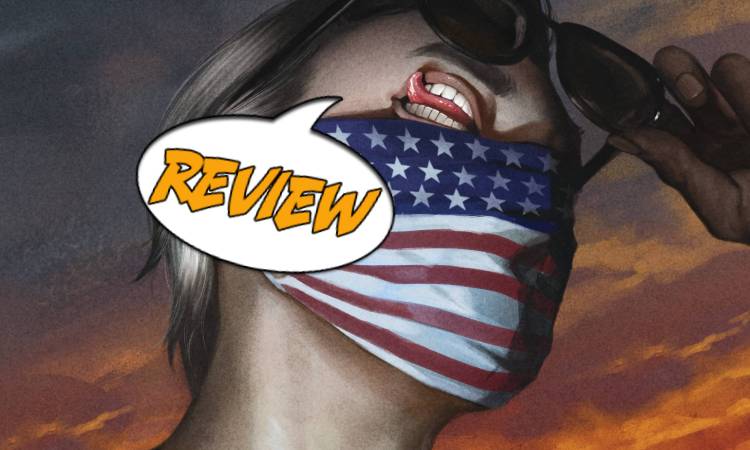 Do you remember your dreams? Do you ever wish that you didn’t? Your Major Spoilers review of The Sandman Universe: Nightmare Country #1 from DC Comics Black Label awaits!

Previously in The Sandman Universe: Nightmare Country: Sometimes, nightmares walk the Earth. Every night when you sleep, the Lord of Dreams chooses the path you’ll follow…into a sylvan Elysium, or down the hallways of your darkest fears. And sometimes, if it is Dream’s will, those nightmares escape those halls, and go out into the world.

But it is not a choice he makes lightly.

WHERE DO NIGHTMARES COME FROM?

At a party in New York City, a young artist named Madison Flynn is chatting up an attractive young man, when he asks if she remembers her dreams. Flynn starts to explain, telling him about a dream that used to recur in her childhood. As she tries to explain, she shifts into a nihilistic rant about how everything is meaningless and even her art will end up at the bottom of the Hudson sooner or later, when she stops dead in mid-sentence, noticing a strange dreamlike creature out of the corner of her eye. In The Dreaming, the living nightmare called The Corinthian goes about his duties, moving from dream to dream, collecting little bits and pieces of memory in his journal. They are stories that never happened, at least not to him, but they’re memories just the same, and he treasures them. He finds himself in a dream with Flynn’s one-night-stand, seeing the dark, impressionistic paintings she has made, paintings that resemble him in all his tooth-eyed glory, causing him to pay her a visit during waking hours.

And somewhere else in the world, even more frightening nightmares are walking the Earth.

DREAMS ARE A TRAP

Sometimes, a first issue doesn’t give you enough of the story to wonder about where it will go from here, but Nightmare Country #1 gives almost too much. Flynn seems to be the center of it all, but the monster stalking her is also seen at the sight of a brutal murder by a pair of creatures calling each other Mr. Agony and Mr. Ecstasy, who are… a lot, and The Corinthian enters several different dreams during the issue. The visceral moments in this issue are somewhat beyond the sorts of things we regularly saw in the original Sandman stories, featuring at least two graphic murders, a dream about eyes-eating fingers that may keep me awake for days, and a few moments that you have to see to fully appreciate. all brought to gruesome life by Estherren’s dreamlike painting. Yanick Paquette provides a three-page sequence of The Corinthian that is even more disturbing in its realism, but the dreamlike swirls of the story are half the fun. The coloring occasionally muddies the subtleties of the art to my eye, but even with that caveat, it’s a beautiful story. Tynion’s script does a good job with the patented Sandman portents and preludes, and it’s fun to see him working in horror again.

As someone who had to gradually warm up to Gaiman’s original work but came to really love it, The Sandman Universe: Nightmare Country #1 jumps right into the eerie, the grotesque, and the hallucinatory, with a story that feels of a piece with Neil’s work while remaining clearly Tynion’s and very attractive renditions of unforgivable things combining for 4 out of 5 stars overall. As always, I feel the need to remind potential readers that DC’s Black Label books are quite serious about their “Adults Only” policy and that this issue is a lot bloodier and more graphic than what we got back in 1988. So, caveat emptor, but know that it’s an entertaining read for those who are comfortable with the material.

It's darker and bloodier than I expected and even with the lovely art, it won't be to everyone's tastes, but it gets a lot onto the page and serves as a strong first issue.