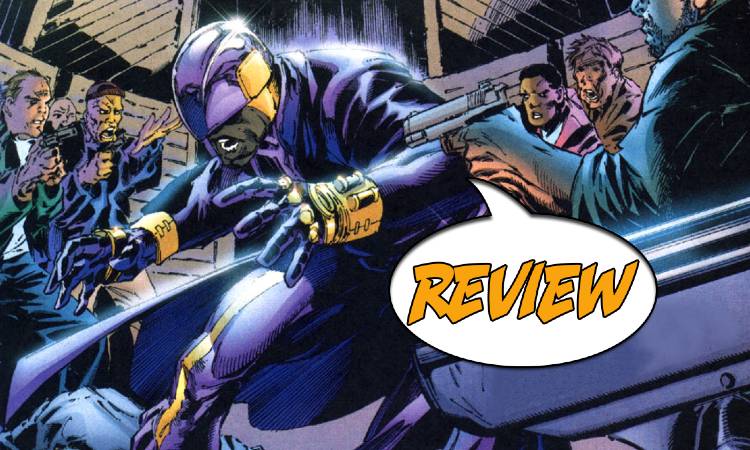 Batman has had many allies in his endless war on crime, but do you remember the sad story of what happened to Orpheus? Your Major Spoilers Retro Review of Gotham Knights #57 awaits!

Previously in Gotham Knights: The son of a dancer and a soldier of fortune, Gavin King took a little from each parent for his modus operandi. Traveling the world with his professional dance troupe, he encountered injustice and chaos everywhere, returning to the US in the hopes of changing the world for the better. Trained by a secret black ops organization, Gavin was gifted a high-tech costume and unlimited funding to punch evil as Orpheus. Settling in Gotham City, he butted heads with Batman on more than one occasion, insisting to the condescending Dark Knight that he wanted to be a role model for people of color, especially the young people of Gotham City. Bats finally concedes his point, even allying with him and asking Orpheus to clandestinely take over leadership of one of Gotham’s gangs, serving as his spy in the underworld.

Then, Batman fired Stephanie “Spoiler” Brown from her role as Robin. In order to try and earn her sidekick role back, the former Girl Wonder activated one of Batman’s secret contingency plans. Unfortunately, the plan to unite Gotham’s gangs under one leader was stymied by the fact that the chosen leader, one “Matches” Malone, didn’t actually exist. Without Malone (who, as you likely already know, *IS* actually Batman in disguise), the underworld summit ended with blood, with most of the gang lords dead, including Boss Moxon and the NKVDemon. Among those who did survive? The Tarantula, who has helped to ignite a full-on war in the streets of Gotham City. As the War Games rage through the city, every villain worth their salt has picked a side, forcing everyone to make the tough decisions, even revealing Batman to the media for the first time, in-universe.  An increasing dark Dark Knight realizes that what is happening is, in fact, one of his own plans, sending him into the streets to find Orpheus, who is unknowingly the key to the plan. Stephanie, as Spoiler, has been fighting her own way across the city, only to come face to face with the consequences of her actions. Fortunately, all Bat-family members are able to kick the consequences of their actions in the head rather than face them. Her battle is really well-done, as Barrionuevo has a clean storytelling style that I really enjoy. The battle between Spoiler and the gang ends with her sending her injured opponents to Leslie Thompkins’s clinic, because foreshadowing is your key to quality literature. The battle between Tarantula and Deadshot is also really amazing, ending with Lawton on his back and Tarantula keeping his wrist-Magnums as the spoils of war. Speaking of war, Batman has to rally the troops, calling in Nightwing, Robin, and Batgirl to back his play, but even his metaphorical sons and daughter can’t believe that the chaos in motion is actually something that he planned. That… is a hardcore Batman, my friends. Unfortunately, even that high-powered Batcycle isn’t even enough to get him to Orpheus before Spoiler, but she miraculously finds the undercover hero just in time… …to see him murdered by a mysterious man in the shadows. Said shadow-dweller not only scuttles the plan, but captures Spoiler himself, leading to her demise not long afterward at the hands of… Black Mask! What’s really frustrating about this story is that Orpheus doesn’t even get a cool costume shot or really any type of cool moment before he is sacrificed for the ongoing story, and with the death of Spoiler later in the arc, nobody even remembers his death during this arc. By the end of it all, Gotham Knights #57 just leaves me sad, as a cool, short-lived member of Gotham’s costumed crew bites it as an afterthought, setting up a big win for the murderous Black Mask, the brutal murder of a teenage girl and the complicated beef between Batman and Leslie that I just don’t have the time to get into, ending up with a seriously down-beat 3 out of 5 stars overall.

Gotham City is on fire, everything is horrible, the art is amazing, but most people don't even remember that Orpheus ever existed. It's a real downer ending.