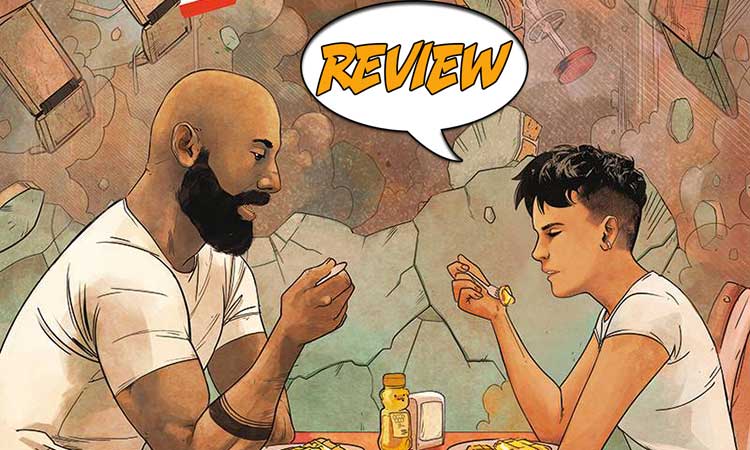 Previously in We Ride Titans: Kit has a prickly meeting with her brother Dej, both of whom have issues with their father, Dwayne. Dwayne wants Kit to do some training with their Titan, the Nexus. He gives her the standard lecture she has heard too many times before. He criticizes her strategy in the simulation, even though it works, and suddenly adds another kaiju to the scenario. She walks out, accusing him of using training as an excuse to put her in her place. He claims to be giving her the training she needs to stay alive. Dej comes home and Kit asks him out for a drink, but the alarm goes off and she must take the Nexus out. But instead of a kaiju, it is another Titan!

We Ride Titans #3 opens with Kit taking on the other Titan as Dwayne talks to her, giving her advice and instructions. He is not getting any readings of a life form inside the Titan. Kit shoots it, but it comes back at her and knocks her down. She cannot regain her footing, and at that point, instead of giving her practical instructions or calling for help from another Titan, Dwayne coaches her, and reminds that she “is the wall.” She does not find this very helpful.

Dej steps in and takes the headset from Dwayne. He may not be reliable, but he does have practical Titan experience and knows enough to share it. He warns her in advance of an incoming attack and reassures her that she can take it. Then he gives her useful instructions on how to get back up again. She is back in the fight! And then the other Titan flies away. Dej quietly warns their father against turning a real-life situation into a personal power play.

Dwayne quietly invites her out for waffles. We get the idea that this was a longstanding tradition for them at one time, but it does have bitter memories for Kit. They used to always get waffles from the same diner after training, but once Dej started training, Kit stopped coming. She felt like she was being pushed aside. Ironically, while they are out together for waffles, Dej is the one at home, alone. His waffles are toaster waffles.

Later, Kit finally has a chance to text her partner. As she does so, a woman named Ash comes up to her. She is a maintenance worker for the Hobbs family and she is excited to meet Kit who is like a hero to her. Kit has some serious imposter syndrome, but Ash has the advantage of seeing the Titan from someone outside the family, someone who isn’t privy to the dirty laundry, someone who can see the good it does for the city.

TRYING TO HOLD IT ALL TOGETHER

A lot of drama bubbles beneath the surface of We Ride Titans #3. The fight between the Titans is huge and you get a sense of the sheer scale of it. We see Kit’s confidence, that she knows what to do and what not to do. She does not fire directly on the Titan until she is sure there is no one on board. Her façade only starts to crack when the Titan falls and she realizes she does not know what to do. She is terrified, and probably starting to get angry at Dwayne, but she holds that in as Dej talks her through what she needs to do.

Breakfast is plainly full of tension. The diner is quiet; Dwayne and Kit are seated away from other people. Even beyond the window, the streets are quiet in the aftermath of the fight. They may be in public, but we see them as isolated from the rest of the city and it is painfully obvious that they are also isolated from each other. And whether he realizes he’s doing it or not, we see that he’s treating Kit as the favorite and leaving Dej behind to eat his waffles by himself, even though he was fully part of the team in this fight.

There’s an intriguing story building up in We Ride Titans #3, and part of the suspense is wondering if the Hobbs family can hold things together long enough to deal with the outside problems.

Kit faces her first battle in the Titan – and another confrontation with her father.