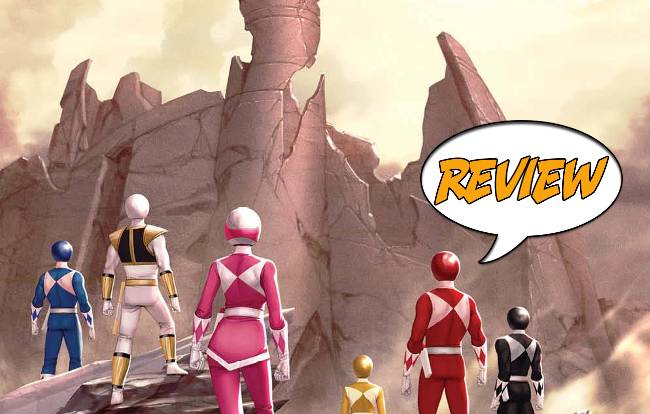 This is the story of Seven Rangers, picked to live in a Power Center and find out what happens when the Power protects you. The Real World: Angel Grove! Your Major Spoilers review of Mighty Morphin #18 from BOOM! Studios awaits!

Previously in Mighty Morphin’: With the combined efforts of Promethea and the Zords protecting the Power Chamber, Rocky, the Red Ranger, and Matt, the Green Ranger, wait in tense anticipation for the return of the Away Team. Emotions run high as Zordon acknowledges a hidden history involving him and Promethea, and how much the war has affected him, while Rocky is torn on different responsibilities that might be irreconcilable without help…

After the end of the Eltarian War, the new Green Ranger has been tasked with returning Zordon to the wreckage of the Power Chamber, where a forcefield powered by the wrecked Zords protects the ruins. Zordon tries to thank him, but the Green Ranger has no use for the arrogant floating head. Grace Sterling, the Green Ranger’s patron, is slightly more forgiving, especially when Zordon finally apologizes for his actions fifty years earlier. Zordon admits that abandoning her and her team was a jerk move, one that the actions of his old general brought to light. As for the Rangers themselves, the team (save for Green Ranger Matt and Red Ranger Rocky) have teleported to another galaxy to find another Eltarian outpost that they can scavenger and possibly return to Earth to replace their destroyed headquarters.

The problem is, it’s not as abandoned as Zordon would have hoped.

THEY HAD ME AT “CAPTAIN MARVELOUS”

Mighty Morphin #18 is a nice breather after the long conflict with Eltar, featuring Rocky’s family making a visit to Promethea, a deep conversation between Aisha and Billy, and even a few name-drops for fans of Super Sentai and other properties. Perhaps the most interesting parts are the subtle moments, such as Zordon being drawn in his Zeo-era tube or Billy’s admission that he doesn’t really worry about losing his powers, something that happened not long after in the TV show’s continuity. Hidalgo’s art is fun and lose, with exaggerated proportions and not-quite-cartoony expressions making for lively visuals. I’m even fine with the stylized helmets, something that might have bothered me earlier in the BOOM! run of Power Rangers, while Rocky’s family provides some much-needed humor after a long war in space.

All in all, Mighty Morphin #18 proves to be a well-crafted start to a new era, featuring Billy and Aisha talking about the weaknesses of individually punching every problem, unexpected Rangers in leadership roles, some well-deserved comeuppance for Zordon, and the start of several new and exciting things, earning 3.5 out of 5 stars overall. I don’t know where things go from here (except to the Lion Galaxy), but Mighty Morphin still has my full attention.

The Rangers enter a rebuilding period, continue an uneasy alliance and even question the nature of their mission in an issue that shows off the range of the new creative team.