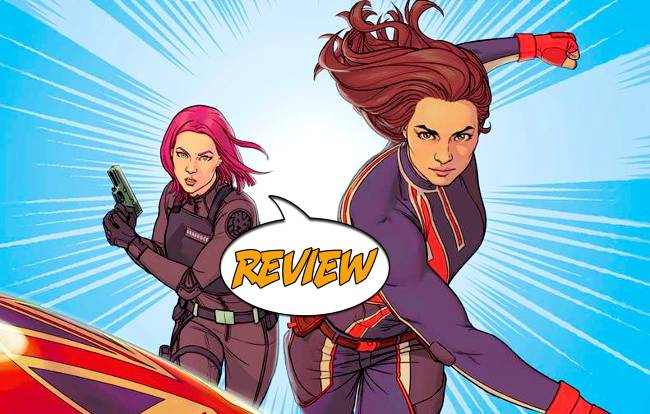 Captain Carter faces a resurgence of Hydra! Or, at least, somebody wants her to think she does… Your Major Spoilers review of Captain Carter #2 from Marvel Comics awaits!

Previously in Captain Carter: Captain Carter is back, and now the whole world knows it! Reeling from her new celebrity status, Peggy teams up with S.T.R.I.K.E. to investigate the sudden resurgence of Hydra, but something doesn’t feel quite right. Can Peggy trust what she’s being told, or is someone trying to use her as a high-profile pawn in a game she doesn’t yet understand?

WHY HIDE YOUR IDENTITY FROM YOUR OWN TEAM?

Now that everyone knows that the living legend of World War II is back, Captain Carter has become an important propaganda tool for the government, and Prime Minister Williams intends to capitalize on it. But with each mission, Peggy gets more and more certain that something is terribly wrong. The Hydra agents she keeps facing have access to resources and technology that simply shouldn’t be available to them based on the state in which she left their agency, and whoever is giving her and Lizzie Braddock their marching orders isn’t revealing themselves. When they are sent to raid a “Hydra” affair that turns out to be a human trafficking organization, it’s the last straw, as the Captain is loath to be used as a tool for the Prime Minister to support his xenophobic agenda. That’s when he decides that the time has come… to liquidate her!

I have a really common complaint about the pacing of five-issue limited series in the modern era, finding that the second issue feels like a letdown after a front-loading debut, and Captain Carter #2 does have some of that going on. It’s nice to see Agent Braddock (who is totally not Psylocke in this world) and Captain Carter coming to terms with their mission, but with so many moving parts (Peggy’s suspicions, Braddock’s status as a legacy, the Prime Minister’s machinations, Lance Hunter’s status, the possible Hydra manipulations), it feels a little less focused than I hoped after the strong debut. Seeing this world’s Batroc is an interesting touch, and there’s a lot good to be found in Cresta’s pencils, but something about the art doesn’t quite jibe with the story being told. It’s not badly done, it just feels much lighter in tone than the twisty story wants it to be.

Even with those issues, though, Captain Carter #2 hits some strong notes, and the end of the issue promises that things are going to heat up quickly next time, with Cresta’s visuals on the final page setting up a strong cliffhanger, earning 3 out of 5 stars overall. Also, while I can’t really fault Marvel for giving the comic a lovely McKelvie cover, it serves to remind me what we’re not getting in the interior pages.

Captain Carter's principles run up against the political realities of Great Britain, with art that doesn't really excite me and a series of pretty okay events.