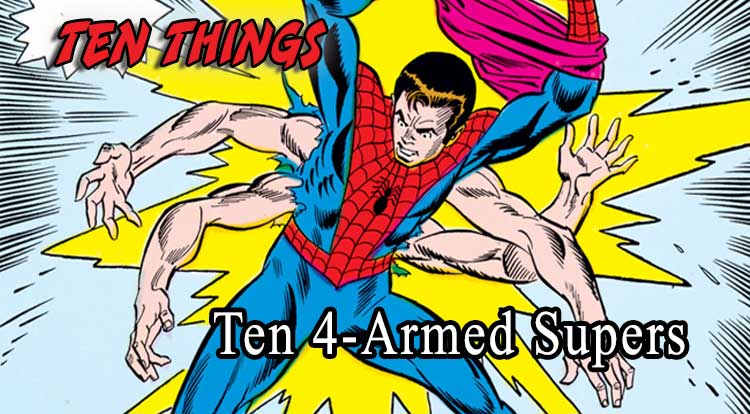 They say two heads are better than one… Today’s supers are TWICE as good as that! Welcome to Ten Things: Ten Four-Armed Supers!

Whooshman-Bicarbonate Films, in conjunction with An Amateur Comics Historian and Goro, Prince of the Shokan, Presents: In the alternate reality of Earth-300, Superman’s rocket arrived on Earth in the year 1976, rather than 1938, changing history from what happened on Earth-2. (Why the first world is named Earth-2 is a matter for scholars and psychologists, well above my pay grade.) Rather than landing undetected in a Kansas field, the Kryptonian rocket was tracked and intercepted by the US military, who raised young Kal-El, training him as the superhero Skyboy. Skyboy faked his own death, only to find Moka claiming credit for his victories in the year 2001, forcing Kal to come out of hiding to fight him… as Superman.

It’s a weird story, not least of which because it was already well past possible for a 29-year-old Superman to have landed in the ’30s at the time of publication. A member of The Maximums, a proto-fascist super-team purporting to be from a parallel Earth, The Bug is a wise-cracking young hero with the proportional speed and agility of an insect. His team features a super-soldier, a thunder god, a giant-man with a tiny wife, and a massive hulking strongman, all of whom turn out to be nothing more than simulacrums created by Mr. Mxyzptlk, who clearly knows about The Ultimates of Marvel Earth-1610. In a fascinating twist, though, the Multiversity-era world of Earth-8 uses several of the character names from Mxy’s reality for another version of The Ultimates, including Bug and his female counterpart, Ladybug. Perhaps the least intimidating character ever to come from the firepits of Apokalips, Rip-Roar stole a Super-Cycle and imprinted it with his own brain patterns, which came in handy after he was imprisoned on Earth. Unfortunately for our sad Master Roar, his ride was in turn horked by Superboy, Robin and Impulse, who used it as their main transportation as Young Justice. A battle for the bike led the semi-sentient vehicle to choose Robin, causing Rip-Roar to have an existential crisis. If the cycle was him and he was the cycle, but the cycle rejected him, how could he go on?

Answer: He didn’t, and instead turned to stone. Rip-Roar also made a cameo on the CW Supergirl show, somehow managing to look even more ludicrous in live-action. Created by Rich Johnston of Bleeding Cool, Chase Variant was genetically engineered with extra arms to make her more dangerous as an assassin.

The name is a terrible pun, and that’s the best thing about the character. But pay attention to that Rob Liefeld art, it may be important in a moment. A member of the Mutant Liberation Front, Michael McCain worked with the Stryfe to better the lives of mutants in the Marvel Universe, by any means necessary. In addition to having extra limbs, he has tremendous superhuman strength and durability, making him a fave-rave for creator Rob Liefeld, repeatedly facing down Colossus, Warpath, and other powerful heroes. After leaving Marvel, Rob created a nearly identical female character, code-named Fourplay, to serve as a member of Bloodstrike.

I will give him credit for not giving her four breasts.

A member of a multiversal thieves guild, The Technet, Ferro² (the superscript is very important, to differentiate between him and his identical brother, Ferro) wielded two swords in battle, keeping another pair of fists free for punching. In addition to his stint bugging the hell out of Captain Britain and Excalibur, he teamed up with Rocket Raccoon as part of an Ocean’s 11-style heist in space, which honestly sounds like the kind of gig I’d take if I had more arms. One of the greatest warriors in his universe, Kreed fittingly hailed from planet Quattro. Trained by the Gucci, the most dangerous assassins who ever lived, his prowess was legendary, meeting few who could match his skill and ferocity. One such combatant was Horatio Hellpop, Nexus, who clashed with Kreed, but forged a bond of respect that made them like brothers. Sadly, Kreed lost his cool and executed huge numbers of people on Mars, for which he was sentenced to death. Rather than allow that, he instead killed himself, sending Nexus into a spiral that nearly doomed reality. After colonizing the galaxy and allowing aliens to migrate to Earth, the various law-enforcement agencies become overwhelmed by the sheer number of unspeakable crimes. Fortunately, the Extermination Act of 2931 authorized exterminators to expand their business from bugs and mice to criminals and more. Roachmill is the best of the best, a status that isn’t harmed in any way by his extra (insectoid) limbs, all the better carrying additional guns.

If you’re into bleak humor, satire and breakneck transitions between the two, Roachmill might be up your alley. On  Earth-9602, the world of Amalgam, The Fantastic Four, and the Challengers of the Unknown were combined into one thrill-seeking, death-defying team: The Challengers of the Fantastic! Rocky Grimm, one of the team’s founding members, left their ranks to become a senator, but during a battle with Galactiac, he returned to the fold, only to be possessed by the alien conqueror. Transformed into a “four-armed thing”, in the words of teammate Red Storm, Rocky battled his pals, eventually overcoming his conditioning and using his might to help repel the alien invader. At the end of that adventure, he and Prof Richards began collaborating on a way to allow him to transform into his rocky form at will.

For those not in the know, Rocky has four arms to emulate The Punisher, Galactus’ robotic enforcer. An inquisitor for the Universal Church of Truth, under the rule of The Magus, Kray-Tor put Adam Warlock on trial for crimes against his beloved leader. Of course, his kangaroo court was openly corrupt, accepting bribes, entering overt lies into testimony, and providing Warlock with an attorney who COULD NOT SPEAK and literally fell asleep during his defense. When allowed a rebuttal, Warlock simply killed Kray-Tor with his Soul Gem. His design may be my favorite alien race ever, thanks to the visual stylings of Jim Starlin.

Once again, this week’s topic, Ten Four-Armed Supers, is all me but feel free to follow along @MightyKingCobra to suggest your own! There’s always more Ten Things madness on my Twitter or check out the full Twitter archive here! As with any set of like items, these aren’t meant to be hard and fast or absolutely complete, especially if Rob Liefeld continues to work.

Dude loves him some multiple limbs.

Either way, the comments section is below for just such an emergency, but, as always: Please, no wagering!