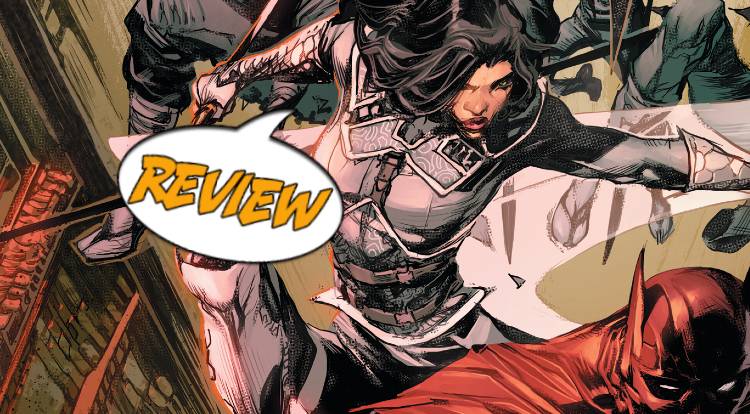 Her name is Talia al Ghul. Deathstroke killed her father. He should prepare to die. Your Major Spoilers review of Batman #122 from DC Comics awaits!

Previously in Batman: Ra’s al Ghul is dead, and Talia is out for revenge! Batman is on the case to find Deathstroke before Talia’s elite killers do! But Batman starts to piece together that not everything is what it seems in Ra’s’s death… and knows whom he must interrogate to get answers: Talia herself! Can the two former lovers ever work together again?

THE HEAD OF THE DEMON IS DEAD

Last issue, after falling into the hands of the DEO, Ra’s al Ghul was murdered, blown to pieces by multiple shots from a man dressed as Deathstroke. Batman and DEO Director Cameron Chase compare notes, with Batman realizing that whoever took out Ra’s intentionally spared his daughter Talia, while Chase and her department have found out how the murderer got him. (I have a theory on that big earth-tunnel, by the way, that I’ll get to in a bit.) For his part, Deathstroke (or King Deathstroke these days) is puzzled, but doesn’t have time to worry about it all, as he and his Secret Society are under siege by Talia’s army of ninjas. While he and clone/son Respawn fight, Prometheus takes a powder, while Deadline meets a very fatal end at the hands of the Assassin’s Guild. While Batman seeks out his former lover, Talia (who is very offended that he accuses her of putting a hit on Daddy dearest), their son Robin seeks out an old ally of his own: Deathstroke’s daughter, The Ravager. Damian tries to convince her to join the cause of avenging his grandfather, only to have Rose snort, “Save it… Let’s go kill my dad.”

The second half of this issue features an untold tale of Gotham, featuring the first battle between Batman and Deathstroke, after Slade was hired to kill Dick Grayson, the first Robin. I like it quite a bit less than the first half of the story, but that’s mostly because of the reveal of who he’s working for. Even with that complaint, Williamson’s plot is a breath of fresh air after what feels like years stuck in a loop of Joker Wars and Cities of Bane. The kiss between Batman and Talia in this issue adds a complicated wrinkle to the murder storyline, while the mention of the Markovian Embassy and the strange earth tunnel make me think that the culprit behind all of this is Geo-Force, who has both earth-moving powers and a grudge against Slade for the death of his little sister. Mark that one down, see if I’m right in six issues. As for the art, both stories are really well-drawn and I especially enjoy Howard Porter’s new style on the lead feature. He manages to combine a loose-limbed take that reminds me a bit of Steve Ditko with an almost chiaroscuro look, and I really like what it does for Batman’s mystique. Hairsine’s second feature is more traditional, but equally successful, especially in the sequence of Robin leaping across the rooftops, making for a lovely, cinematic feel.

In short, Batman #122 hits the spot, combining strong art and a story that breaks some new ground, even if it’s about the murder of an immortal, using the supporting cast of Batman and Deathstroke’s books to good measure, earning 4 out of 5 stars overall. Even the parts of the book that I like the least work on their own terms, setting up a story whose ending I really want to see.

A murder mystery with an unexpected victim and a case of mistaken identity makes for a well-crafted, engaging story, especially when Batman and Deathstroke's children get involved.