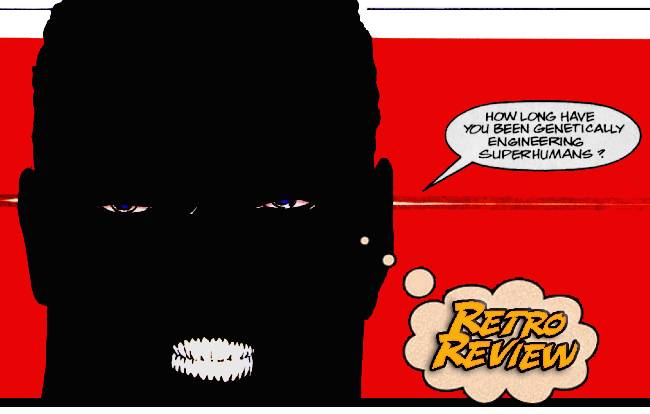 For some reason, many creators and readers are fascinated by the idea of “evil Superman” and how it might make for fascinating stories. Allow me to retort… Your Major Spoilers Retro Review of Supreme #1 awaits! Previously in Supreme: 1988 was the fiftieth anniversary of Superman, the strange visitor from another world with powers far beyond those of mortal men. 1992 was the dawn of Image Comics, a time when several popular creators left the creative ranks of the House of Ideas to set out on their own, creating without the restrictions of a shared universe or excessive editorial oversight. These two dates don’t seem to have a lot in common, until you open this comic and find that, after fifty years, Earth’s greatest superhero is returning home. I was 21 when this comic came out, a junior in college, still learning about the world and the kinds of clichés that bother me today, but I vividly remember opening this comic and seeing that it was titled “Second Coming” and realizing with certainty that it could not go anywhere good. The approach of a human-sized object to Earth attracted attention from the governments of the world, leading the United States to respond by mobilizing their government-sponsored protectors of the world, Youngblood! (Youngblood #1, one of the earliest salvos of the Image Comics revolution had come out in April of this same year, though whether it was named after a single by Bruce Willis or a Rob Lowe movie is still unrevealed.) The team confronts the invader, only for Die-Hard (who fought with Supreme during the Second World War) to recognize him. If you’re wondering why the framing is so strange, that’s actually how the page appears in the original comic, with Supreme on the left half of a splash page, with both halves feeling cramped and off-kilter. The use of the gutter is also a repeated issue with the art throughout the book, rendering part of the art of every page unreadable as it disappears into the binding. Alien warrior Combat (the fellow with the antlers) takes umbrage at the claim that this mere mortal is the legendary hero, going into attack mode, with the team following close behind. What follows is a perfect example of every “evil Superman” story we’ve seen or read. With his wide array of superhuman powers, Supreme makes short work of the heroes, sneering and snarling through a meaningless battle that the fight registered an impact equal to a 500-megaton explosion, leaving a crater on the moon and proving to everyone that he really is the hero he claims to be. It also proves to the reader that Supreme is clearly just Superman, in nearly all aspects. Once he realizes what he’s fighting, though, Supreme allows them to take him into custody, at which point the government offers him a job with Youngblood, but he’s more interested in how and why there are so many superhumans and how they’re engineering them. Youngblood isn’t the only super-team to have their eyes on hiring the greatest hero of them all, though. Who are these mysterious superhumans? I’m going to be honest with you, Faithful Spoilerites: I don’t remember. I’m not sure anybody does. The mysterious Mr. Gate (who is written in such a way that he sounds like Mr. Burns from The Simpsons in my head, thanks in part to his assistant Smithers) has his own ideas about how to convince the hero to join their ranks. What I find most interesting about revisiting this story after thirty years is that it’s not even engaging in retrospect, like some first appearances. Since the idea is nothing more than “What If Superman, But Grimdark,” there’s no back story reveals or retcons to give this new context, nor have subsequent stories revived cast members. In fact, the Lex Luthor, Jimmy Olsen, and Lois Lane analogs here are all retconned over (more than once!) by later stories, meaning that there isn’t even the chance of a character from the exquisite Alan Moore story making their first appearances here. Also, the faux Luthor is named Grizzlock, which is… just awful.

There’s a second story in this issue as well, featuring a hero called Infiniti, whose story was threading through multiple Image books at the time, but it’s completely incomprehensible. The introduction of the Image Comics Superman quickly becomes meaningless as, by issue #2, Supreme’s story turns into a team book, where he proves himself to be a brutal, murderous jerkface, a premise that is in turn entirely jettisoned by the end of issue six. Supreme #1 is the beginning of a series of shaggy dog stories with no punchline, presented artlessly, and none of it works in any way, making for 1 out of 5 stars overall. I’m not even mad at this book, as it’s more dull than it is terrible, making incredibly obvious story decisions in a ham-fisted way that presages Brightburn, Supreme Power, The Man of Steel, and half a dozen other tales of unrestrained Kryptonian carnage. Avoid at all costs.

This isn't merely a bad comic, it's one that doesn't succeed on any level, from art to story to conceptualization to the gimmick that makes the cover impossible to either read or store.