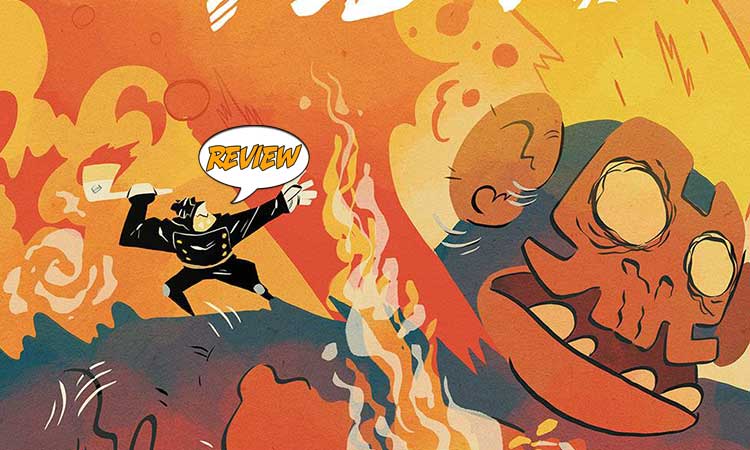 On its surface, thanks to the magic of advertising, Monkey Meat Island looks like a place of never-ending fun and excitement. But what dark secrets lie deep within its heart? Find out in Monkey Meat #4 from Image Comics!

Previously in Monkey Meat: We saw the story of a changeling who became a delivery boy on Monkey Meat Island. One day he has a special delivery to make, which involves crossing a cursed bridge that no living being can set foot on. The bridge, naturally, is also guarded by a troll. But the stakes are worth it – if he can get across the bridge, he may be able to save a life!

BENEATH THE SHINY SURFACE

If there is anything I expect from Monkey Meat #4, it is that whatever happens, I will probably not have expected it. As an anthology series, the sky is the limit in the kinds of stories that can be told. Beneath all of them, there is the connecting web that is the Monkey Meat Company. The odd, cynical, sometimes sinister things they do bring this peculiar world together.

This time we start with an ad encouraging people to come to Monkey Meat Island and showcasing Astou, a girl who won a job at the Monkey Hotel. She did this by being Monkey Meat’s biggest fan. She particularly adores Thaddeus Lug, whom we have seen in previous issues. He is about as close to a realist as they can get in this strange place. As part of his work, he is also an explorer, trying to discover the secrets of Monkey Meat Island – at least the marketable ones. Capitalism, remember?

The scene shifts to Astou on the job with Lug. She is excited; he is downright cynical, pointing out that part of the reason they hired her is because she is a fan, so they can get away with not paying her much. For him, this is just a job and not a good one. There’s a fancy fountain of Soul Juice in the lobby. Soul Juice, one of their popular products, is literally liquified souls. This is horrifying all on its own, but it also turns out that strange things happen around it.

Today there is a particularly special event. At the fountain, they are honoring the Oompa tribe, formerly occupants of the Island, now all tragically extinct. The least the Monkey Meat Company can do is to offer merch in their memory. Wow, is that ever dark and cutting. Anyway, a bubble of Soul Juice strikes the speaker, and he becomes possessed. Lug calls the lab and requests a soul trap, but Astou rushes in to try to help.

One thing leads to another, and she falls into the fountain and hears a voice. It speaks of betrayal, and she sees the memories of one of the Oompas. It remembers meeting Lug and showing him how to get to the hidden area where they lived. It is quite a complicated journey, but Lug and his team make it there. He is ready to mark it on the map and go, but his team punches him out. When he comes to, they have destroyed the entire village and the little Oompa dies.

Astou sees all of this. She surfaces from the fountain as Lug captures the soul of the Oompa and locks it in a soul trap. Astou quits her job before he can explain. The scales have fallen from her eyes, and she sees Monkey Meat Island as quite a different place now.

The art of Monkey Meat #4 is a study in contrasts. We know from the beginning that Astou is excited and even star-struck to be working at the Monkey Hotel. Her smile can barely be contained. We have seen Lug before. He has always seemed more down-to-earth, but he comes across as particularly dour today. Standing next to Astou, the contrast can hardly be starker. It also sets it up for us to see how much of a gut-punch it is for the young woman to learn that Lug is not exactly the hero she idolized.

The truly stunning art comes when Astou falls into the fountain. Soul Juice is the color of flames. As Astou sinks into the pool of color, she is surrounded by the soul’s voice as he talks about Lug. This flows seamlessly into a trippy montage. The Oompa is a tiny person with a head like a mushroom-cap. It trusts Lug, and we see it with big, dark eyes and innocent smile. The horrors and challenges Lug and his people have to get through fill several imaginative pages. All this for a charming mushroom village of tiny mushroom-like people. Their destruction is savage and heart-wrenching.

Monkey Meat #4 is a dark tale and does not pull any punches. There is tragedy at its center, a tragedy that Lug cannot prevent even while he realizes he was inadvertently its facilitator. But we all have to learn that some of the things we do can never be undone.

A dark tale from the heart of Monkey Meat Island.