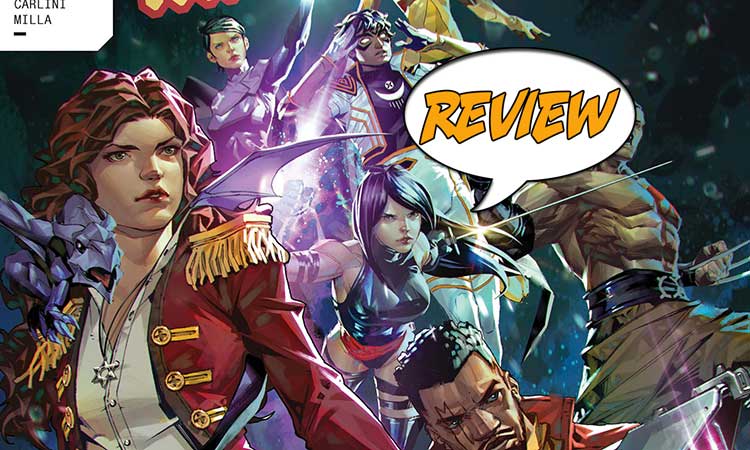 The Marauders are back with the same mission as before, find and rescue mutants, no matter where.  But their newest member might have other ideas.  Your Major Spoilers review of Marauders #1 from Marvel Comics awaits!

Previously in Marauders: Captain Pryde and the Marauders are rededicating themselves to rescuing mutants, wherever they may be, no matter how dangerous the odds against them are.

Marauders #1 kicks off in media res, with the team responding to a mutant who has lost control and is being threatened by humans.  Psylocke and Bishop team up and are able to neutralize him and get him home.  Back on the mutant island of Krakoa, Kate Pryde uses an ancient box she was given to reach a forgotten section of the island where she finds Cassandra Nova, Professor X’s evil sister.  It’s clear she knows something, so Kate reluctantly welcomes her to the team.  After a montage of the rest of the team enjoying their downtime, the members are called in by Kate.  She explains that Cassandra has explained that there’s a generation of mutants, thought lost, but are actually being held by the Shi’ar.  On the Shi’ar home planet, the leader is informed that The Marauders are coming, at this point a secret presence reveals themselves and shows the queen something.  This thing is enough for her to order an attack on The Marauders.

ENEMY OF MY ENEMY ETC…

There has never been a better time for X-Men fans than the time since Jonathan Hickman revitalized the properties a few years back.  But, there is one trope that keeps getting used in all of the X-Men books and that’s the “let’s put an obvious villain on a team to create tension” trope, and it’s on full display here in Marauders #1. The inclusion of Cassandra Nova is an awkward wedge in an otherwise entertaining book.  The plotline with the Shi’ar is mysterious and intriguing with hints of political drama, seeing the team in action is fun,  the diverse team is compelling in their own right, but having Cassandra there forces just one too many suspensions of disbelief, especially when they actually bring up how personal her actions were to Kate specifically.  This makes her part in this book feel emotionally bland, as it appears to be mostly there as a plot device.

The artwork in Marauders #1 is definitely unique. The look here is very cartoonish and expressive, which works well in making this dynamic feel, with a good sense of motion.  The flipside to this though is that everyone has big eyes and pouty lips that give them all a very young look, even Cassandra Nova.  It works here, but is a tonal shift from some of the other x-books and the previous runs of Marauders.

Marauders #1 succeeds in being entertaining on its own while also leaving some intriguing hooks to come back to via hints of political intrigue and diverse characters with complex interactions. It falters though by utilizing a cliché element that has become too commonplace in the X-Men-related books. 3.5 out of 5

Marauders #1 is a decent comic book that takes a bit to really get going, but is enjoyable along the way.