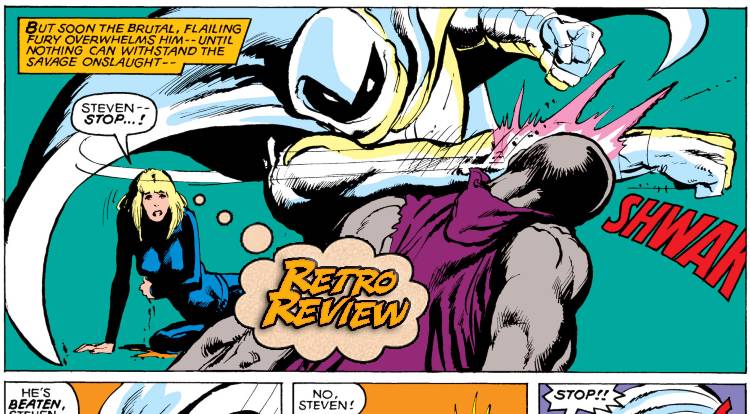 He’s been a cabbie, a killer, a rich man, a pauper, a prawn, and a king, but Marc Spector has one role that eclipses them all. Your Major Spoilers Retro Review of Moon Knight #1 awaits!

Previously in Moon Knight: After making his first appearance as a villain in the pages of Werewolf by Night, Moon Knight spent about five years bouncing around the Marvel Universe. He teamed with Spider-Man and The Thing, joined the Defenders for a short time, and had his own tryout series in the pages of Marvel Spotlight. It was a series of backup tales in the pages of Hulk! magazine that lifted him out of the ranks of your Jacks of Hearts or Tagak the Tiger Men. Redesigned by Bill Sienkiewicz, Moon Knight had a slick new look and a revamped and revised attitude, casting his first villainous appearance as an undercover operation while setting up his new status quo and explaining his origin for the first time, leading us into this not-exactly-a-debut issue.

We open in Sudan. Working as a mercenary in the employ of Raul Bushman, Spector finds himself horrified at the brutality of his employer. When his associate, the pilot known as Frenchie arrives, he has even worse tidings: Bushman isn’t just a jerk, he’s actually contravening the goals he claims to uphold, working to enrich himself rather than overthrow a corrupt government. Spector and Frenchie are prepared to leave when Bushman kills an innocent man, then executes a crowd of civilians. Marc is forced to act, but Bushman gets the drop on him and leaves him in the desert to die. Spector suddenly awakens, his corpse having been left in the shadow of a statue of Khonshu, an Egyptian god of vengeance, and he credits the god with his resurrection. Donning Khonshu’s shroud, he prepares to kill Bushman, only to have to save Marlene, the daughter of the man Bushman murdered with his teeth. (Yeah, that part is pretty awful.)

We then jump to the present, as Moon Knight has returned to New York, became a millionaire, and established a trio of identities allowing him to monitor crime on multiple fronts. Blue-collar thieves are monitored by high-class Steven Grant, while Marc handles the underworld, and cab driver Jake Locksley gets all the dirt. It’s a pretty cool setup, which might be confusing for someone thinking that this first issue is actually his first appearance. Now living with Marlene, the man with half-a-dozen names has actually been narrating the first half of the issue into his tape recorder, having realized that Bushman is once again active in NYC and that he very clearly wants to be found. One check-in with Crawley, his primary underworld connection, and it’s Moon Knight time! It’s very clear that Sienkiewicz’s Moon Knight takes inspiration from Neal Adams (especially in that first panel), which is one of the reasons why so many people feel the need to associate him with Batman. For my money, these early issues of Moon Knight are more reminiscent of Master of Kung-Fu than the Dark Knight, but I suppose there is the matter of the cape. Breaking into Bushman’s operation, Moon Knight systematically works his way through the thugs and mugs, battling his way to the man himself, where he teaches the would-be villain the REAL meaning of fear. In fact, the assault is so overwhelming, that Bushman is left unconscious, and only Marlene’s intervention keeps Moon Knight from turning his face into a fine red mist. Even though the events of this issue go by VERY fast, Moench’s scripting is tight (which is why, when he left Marvel Comics a few years later, he ended up working on a certain Caped Crusader for the Distinguished Competition) and the resolution of the Bushman situation makes it clear that he’s little more than a MacGuffin for the hero’s origin, not yet ready to be a real threat. Moon Knight #1 does a lot of things right, especially in the art department, setting up the hero’s status quo and supporting cast, expanding on what we know of his origin, and establishing the Marc/Marlene couple as a key piece of the puzzle, earning 4 out of 5 stars overall. It also makes it clear how the character is different from certain other caped vigilantes of the night, which will allow those in the know to tell who has and hasn’t read these adventures by their comparisons to Master Wayne of Gotham.

Moench crafts a well-constructed plot that allows Spector to reveal his origins, clear up a long-standing grudge, explain his modus operandi and supporting cast, while Sienkiewicz just plain KILLS it on the art. Worth tracking down.