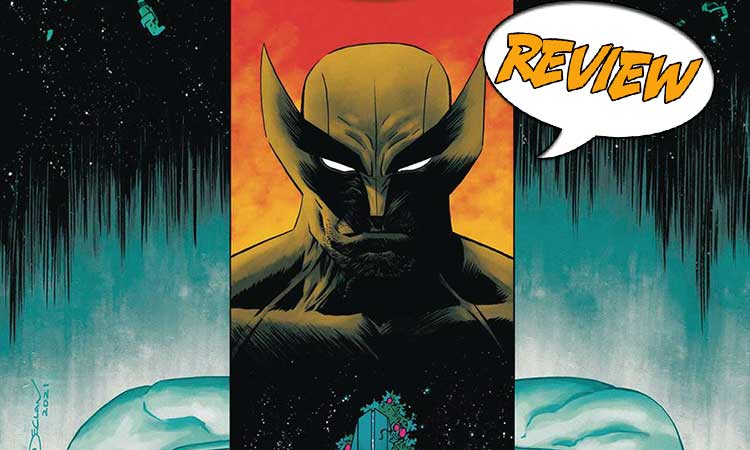 A trio of mutants has been kidnapped by A.I.M.  and there’s only one guy who’s got what it takes to get them back, Wolverine.  Your Major Spoilers review of X-Men Unlimited: Latitude #1 from Marvel Comics, awaits!

Previously in X-Men Unlimited: Latitude: When A.I.M. manages a covert infiltration of the S.W.O.R.D. station and kidnaps three mutants, it’s up to Wolverine to take one giant leap for man and get them back.

A MAN ON A MISSION

X-Men Unlimited: Latitude #1 opens up with Wolverine already on the trail of A.I.M. He tracks his missing friends to a large spaceship and infiltrates it.  He quickly makes his way through the resistance he encounters and finds a computer.  Using the terminal he discovers that A.I.M. has plans for the mutants’ DNA.  He also learns that a bomb has been triggered in that portion of the spaceship.  Having made his way through the explosion Logan continues his search, first by interrogating a hapless A.I.M. goon he comes across, and then by hacking his way through a computer mainframe until it’s willing to negotiate.  He finally finds the first of the three missing mutants, and then the two of them set out to find the others.

There are a few adjectives I try to avoid when reviewing comics because they’re just too broad.  But sometimes, there’s just nothing else suitable.  This is one of those instances, and the adjective I’m thinking of is “fun.”  X-Men Unlimited: Latitude #1, doesn’t so much have a plot as it does a setup.  After establishing what Wolverine is doing, this comic just throws one obstacle after another at him and just lets him handle it in his own way and each one is entertaining. There are some nice quips, some nice jokes, and plenty of good action.  There’s not much else to this issue.  If you’re looking for an intricate and layered storyline, this probably isn’t it, but where it lacks in-depth, it more than makes up for in just sheer enjoyment.

This is an issue that has a lot going for it visually.  What’s surprising though is that the real impact isn’t really from the art, but the design and layout.  A majority of the pages consist of one-page length vertical panel and then a series of vertically aligned smaller panels or another long one.  This forces the reader to read this comic up and down and then left to right.  Now, this could be annoying, but the creators have done a good job utilizing this format well, with lots of panels of people falling down vent shafts, or descending through ships, so that it feels natural to read it like this.  The one criticism though is that this format leads to this book feeling padded. In addition to this, there are a few instances of the visuals being used as an accomplice to some jokes, in particular, the interrogation of an A.I.M. goon and the reveal of the second kidnapped mutant comes to mind.

THE BOTTOM LINE:  A GOOD TIME

While it doesn’t have a lot of the intricacy that the X-Men books have come to be known for, especially under the guidance of Jonathan Hickman, it makes up for this by being a pure roller coaster style story that doesn’t take itself seriously at all.  4 out of 5 stars.