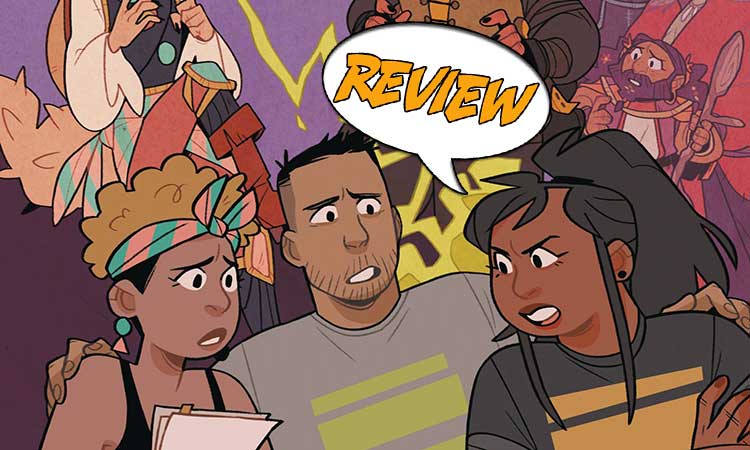 The party has forged ahead without Kezz. Is Cass going to give up on the game where she is not wanted? Can the party survive without Kezz? Find out in The Last Session #4 from Mad Cave Studios!

Previously in The Last Session: Shen and Cass meet at the store, and Cass mentions that Lana completely ignored her. This reminds Shen of how Lana sometimes was, back in the day when she could get weirdly jealous of her friends. On game night, Jay mentions that he and Cass are going to see a band, and Lana gets momentarily upset about how this is taking time away from her. Meanwhile, in the game the party is sure they’re tracking down a necromancer, judging by all the skeletons they’ve been battling. Finally, they reach the crypt and start working their way through all the traps. But Cass’s character still thinks something is not quite adding up. She sees connections back to Lord Avalon. As she digs furiously through her notes, the party leaves her behind.

The Last Session #4 opens in the past where we see Lana’s struggles with her weight and a mother who is critical of her gaming and gaming friends. But gaming was where she felt accepted as she was.

Cass’ character, Kezz, is alone on one side of an enormous pit. Cass decides to go pick up pizza and tells the others to go ahead and play on without her. She steps out the door and is surprised how emotional she is about her character being left behind. Meanwhile, Jay looks around the table at his other friends. Walter admits that they got caught up in what the game was for them and forgot about what it might mean for Cass. Lana feels like they never get to see each other except on game night and that Cass keeps screwing things up. This discussion has the ring of truth to it. Underlying all of this are the fears and stresses that come with knowing they are all about to part ways and move on with their lives.

But when Lana accuses Jay of playing favorites with Cass, it’s the last straw. He asks them if any of them have read the notes he gave them, which they haven’t, really. Cass may be the only one of them who has a clue about the actual plot. Jay calls to check in on her; the pizza is not ready, and she wants a little more time. Jay decides that the party can continue as they have chosen – without Cass’s bard.

They make their way deeper into the dungeon and finally to the throne room where they find not a necromancer, but a lich. In the following fight, they all realize they miss some of the little things Cass brings to the table. They’re captured, and I must say, I loved it when the lich accused them of breaking into his home, destroying his servants, and ruining his décor. He also accuses them of jumping to conclusions. Sure, he’s an evil lich and everything, but he’s also been the one force keeping Lord Avalon from accumulating all the Magestone in the area for his own nefarious purposes.

After he has a bit of a monologue, the party realizes that he probably is telling the truth. But he tells them he doesn’t plan to kill them. He has something else he wants them to do, and he thinks he has just the way to force them to do it.

I think the art in The Last Session #4 does a terrific job of showing us the characters as they were in high school, and how those experiences still affect them in the present. These are all young people who felt like they didn’t belong. Gaming helped them get through school, find their interests, and find their voices. Although they may be young and optimistic, the early shadows of their experiences continue to lurk just below the surface. Gaming helped them see their good points; ironically, now it helps them to see some of their faults. And this is reflected in their expression and body language as well.

On a more cheerful note, the lich is thoroughly entertaining. On the one hand, he is a powerful, undead, magic-user with a lot of resources at his disposal. On the other hand, he has had a busy life and was looking forward to a peaceful retirement. He does seem to enjoy being smarter than the party and is thoroughly amused when he finds out they had a party member who was figuring things out and they didn’t listen to her. Bad guys with a snarky attitude are a lot of fun.

BOTTOM LINE: THE ADVENTURE THAT IS LIFE

The Last Session #4 deftly uses the context of gaming to give us a modern-day coming-of-age tale. There are pitfalls along the way, and the characters have their flaws, but we can’t help but root for them to make it through.