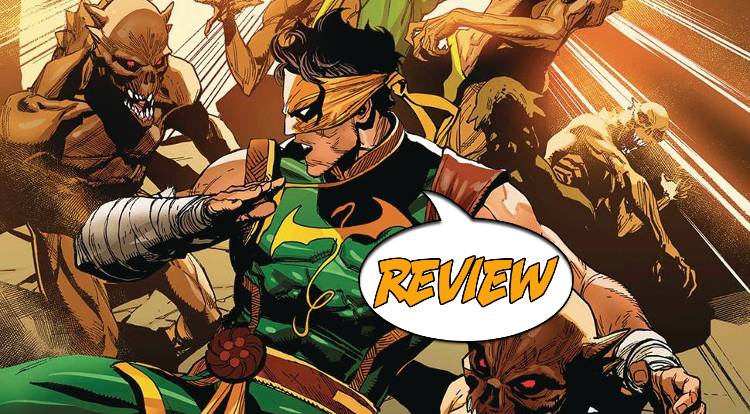 There’s a new Iron Fist in the Marvel Universe! But nobody is quite as surprised as the previous Iron Fist. Your Major Spoilers review of Iron Fist #2 from Marvel Comics awaits!

Previously in Iron Fist  As the newest Iron Fist adjusts to his role, he struggles to handle his warring sources of power! Can he find balance before they consume him? The answers he seeks may lie at the heart of K’un Lun, with past bearers of the Iron Fist. Meanwhile, former Iron Fist Danny Rand’s search for his successor heats up!

In order to catch him, Danny will have to cash in a favor… from an old friend!

THE SWORD OF FU XI MEETS THE CHI OF SHOU-LAO

Since the shattering of the blade that made him The Swordmaster, Lin Lie has been staying in K’un Lun with Mei Min and her family, trying to recover from his injuries and acclimate to his role as Iron Fist. She’s even accompanied him into the field, with this issue opening in Shanghai as they fight the zombie minions of Chiyou, freed when his blade was broken. Their battle makes international news, catching the attention of Danny Rand and Luke Cage, who decide to call in some favors to track him down. Once Lie gets back home to K’un Lun, he is attacked by one of the locals who believes that he and not Lie should have been the new Iron Fist. Their battle is interrupted by The Thunderer, who then offers the new Iron Fist some advice: If you can’t swing a sword, start by merely lifting it. But things aren’t going to be that simple, as someone Lin Lie is very familiar with has made her way to the tomb of Chiyou seeking power for herself.

Having missed a few issues of the previous Iron Fist run, I’m a bit put off by this issue leaping right into Rand and Lin’s lives without establishing who the characters in play are. I know Luke Cage and the Daughters of the Dragon, but I had to go to the archives to remember who Pei is or why Min Mei is suddenly fighting alongside the Iron Fist. That said, the events of this issue make it impressive that so many characters are in the story, as we move at high-speed from Shanghai to K’un Lun to New York and back, with a full-on training montage in the middle of it, which makes things feel somewhat rushed. The art is nice, especially when it comes to the fight sequences, though I’m less enthused about the indistinct faces and facial expressions on display. The design of the new Fist’s costume is my favorite since Danny’s original high-collar-and-slippers look, and the overall costume works for Yang, Thunderer and the denizens of the hidden city is very well-done.

All in all, Iron Fist #2 is pretty satisfying for me, providing some depth and conflict to Lin Lie’s new role, keeping Danny Rand in the story, and making the stakes of Lie’s shattered sword an important part of the Marvel Universe, with art that nails the combat sequences pulling it all together for 3.5 out of 5 stars overall. I’ve been reading Iron Fist’s adventures since 1983 or so, and I like how well this story calls on the legacy aspect established in Immortal Iron Fist to give the new bearer of the power an identity of his own, and I’ll be looking forward to seeing where things go for the former Swordmaster.

The new Iron Fist is a likeable kid and his quest to find the shattered pieces of his magic sword makes for a nice driving force for the story, but there's a LOT going on in these pages.