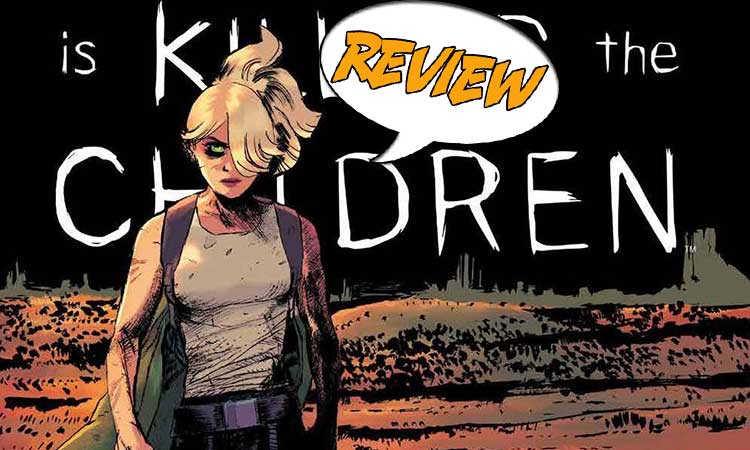 Something is Killing the Children #21 Review

People are being killed in Tribulation, NM. Gabi is a survivor, but she won’t talk. Just who – or what – did she see in the latest attack? Find out in Something is Killing the Children #21 from BOOM! Studios.

SOMETHING IS KILLING THE CHILDREN #21

Previously in Something is Killing the Children: Erica’s family was killed by a monster, a monster that can be seen only by children and members of the Order of St. George, monster slayers. Erica is brought into the Order and becomes a successful hunter herself. But she doesn’t agree with their philosophy of wiping out the traumatized survivors of attacks, all for the sake of keeping monsters and the Order a secret. She has broken off from them, but now as she hunts monsters, the Order is looking for her.

Something is Killing the Children #21 is a beginning. I think a new reader could easily be drawn into this world, although the experience may be richer for someone who has been reading the series all along. It opens with Gabi, a blood-spattered girl, sitting in the back of a police car demanding a lawyer. The cop (Carter) tells her she is not a suspect. They have camera evidence placing her nowhere near what happened. But he wants her help because they have no idea what happened. She does not trust him and won’t talk without a lawyer.

The cop tries again, and this time we learn Gabi’s sisters, mother, and grandmother are all dead. He just wants to know who she saw so he can keep him from killing anyone else. Her family is not the only victims.

This is in the town of Tribulation, New Mexico. The scene shifts to a bar where a young woman named Riqui pours drinks for a couple of regulars. Gabi walks in and insists she wants some alcohol since her family is all dead. Riqui automatically refuses. Then they see the blood on her, and Carter walks in. He wants Riqui to take Gabi in for a few days. He doesn’t want Gabi to get lost in the system. Riqui asks what happened.

He struggles to make sense of what he remembers. The neighbors reported screaming. He walked in and didn’t see anybody, but there was a terrible smell. The first body was the grandmother, and then Gabi’s mother. His talking brings back Gabi’s memories. She screams at him to shut up and kicks the stool he’s sitting on. Her trauma is palpable.

She runs outside and sees a large, humanoid form lurching off into the woods, carrying a person under one arm. She focuses on it. We see it more clearly. It is definitely a monster. Cue the arrival of Erica.

I like how Something is Killing the Children #21 involves kids with such distinct personalities. Even at a young age, people’s experiences can influence the way they respond to stressors. Gabi is of an age where she is starting to assert herself. Her head is partially shaved, and her hair is dyed pink and green. She appears both tough and vulnerable. She struggles, unsuccessfully, to keep back floods of tears. Her anger seems to be the one thing remaining to hold her together.  In contrast to her, Carter is trying to be patient, but we see increasing desperation. People are dying horrible deaths and he has no lead.

I like the flashback scene. As Carter starts to recall, we see the images in his memory as being flatter in color with strong shadows and images that are somewhat blurred around the edges. I think the reason I like this is because human memory isn’t as good as we think it is, and this captures what it is often like. Gabi’s memories are just as fractured and nightmarish but have more color. We see the bodies indistinctly, but we know that what is seared in Gabi’s mind is the blood and how unreal it all seems.

Something is Killing the Children #21 begins a new arc that is horribly grim and will undoubtedly be horribly dangerous with an entirely different monster this time. Gabi is justifiably prickly, but she is an interesting kid to center the story around.