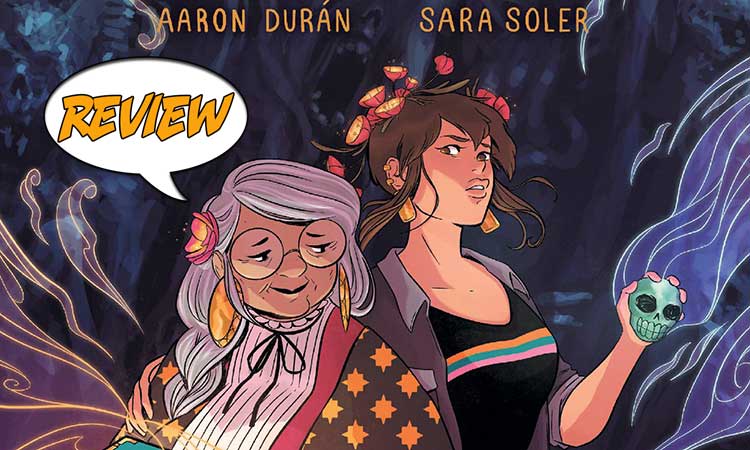 Season of the Bruja #1 Review

A little demon-expunging is all in a day’s work for Althalia and her friends. But what if this is only the beginning of their troubles? Find out more in Season of the Bruja #1 from Oni Press!

SEASON OF THE BRUJA #1

Previously in Season of the Bruja: Althalia has long known that she is the last of her kind, a bruja, trying to keep the power and stories of the ancient ways from fading away. She cares for her beloved abuela, who teaches her how to use the family magic. She also works in a local paranormal museum with two friends, a Were-Coyote and a Chupacabra. She still has a lot to learn, but everything is about to change…

Season of the Bruja #1 opens in a pleasant neighborhood, but things are not so pleasant in the house we focus on. There’s some quick conversation, some crashing noises, and a kid who seems to be flying. In short order, we see that the child is possessed. Althalia is here with her friend Dana, a Were-Coyote, who desperately wants to shift forms and attack. After a little more chaos, Althalia steps up and pulls the spirit into herself. Not only is it dramatic, but I was not expecting this.

Inside her mind, Althalia converses with the demon. He has a lot of confidence and tries to lord it over her. She finds a seat and yawns, unimpressed. The demon is a little nonplussed. There is more to Althalia than we first supposed. Meanwhile, the kid returns to normal, but Dana and the third member of the team, Chuey (a Chupacabra) try to deal with Althalia. They know what she’s trying, but it could be very dangerous, especially if the demon gets the upper hand.

Althalia kicks the demon and asserts herself. It confesses that it is frightened. It claims there is a purge coming, and it was just trying to get away. Then we cut to Althalia coming back to herself and telling her friends that she is cutting a deal with the demon, and she lets it flow back into the doll it had first possessed.

Chuey, Dana, and Althalia are a team who takes on things like this. Althalia is still in training to be a Bruja, as we learn when she goes home and her abuela catches a whiff of demon smell on her. This brings the whole story out. A woman bought a doll for her child at an auction, but it was a containment vessel for a lesser demon. Her abuela is happy that Dana and Chuey were there to handle it, and Althalia confesses to what she did. Her grandmother accuses her of taking too many risks.

Her abuela wants her to drive them to the museum to see an exhibit. Althalia does not want to go. The exhibit is of early Central American culture. I love their conversation. Althalia sees this as showing off spoils of war. That it is her culture as well makes her angry. Her abuela reminds her that the past is the past. They cannot change that, but they have a choice in how they go forward. Anger, she says, will only lead to more suffering.

But suddenly it becomes apparent that she has a new – and entirely unexpected – enemy close at hand!

The art of Season of the Bruja #1 has plenty of verve. I also like how it varies from over-the-top dramatic to subtle and back again. The opening scene is terrific for catching our attention. We know the tropes of possession to realize that is what’s going on, and the action in this encounter is big and bold. Dana and Althalia are front and center in the fight, but we see a couple peeks of Chuey. At first, we don’t know what side of the fight they’re on. But those peeks ease us into the rest of the supernatural beings and events.

I enjoyed the scene where Althalia goes home to her abuela. There are a lot of little details in the house which, first of all, make it look cheerful and lived it, but which also call to mind the culture of Mexico. The color palette is bright and pretty. Decorations have interesting geometric patterns. Both Althalia and her grandmother choose to wear flowers in their hair. Perhaps most interesting of all is the abuela’s pet, Gordo, who is a brightly colored creature like a winged frog. And he has the most adorable webbed feet and a sticky tongue.

Season of the Bruja #1 is a great opening issue that sets up the world and gives us some hints about the conflicts yet to come. I like that there is some humor, and that Althalia is confident and opinionated. I can’t wait to see what happens next.

Season of the Bruja #1

Althalia doesn’t just work in a paranormal museum, she is a bruja, and the last of her lineage!